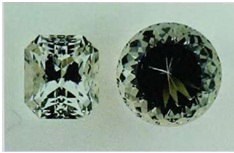 Oligoclase comes from Greek words meaning little break because the cleavage was believed to be less perfect than in albite.