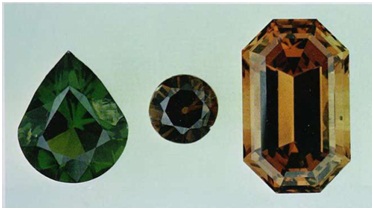 This is a complex solid-solution series involving Fe and Mg silicates. The series extends from enstatite: MgSiO3, through bronzite: (Mg,Fe)SiO3, hypersthene(Fe,Mg)SiO3, to Orthoferrosilite FeSiO3. Like the plagioclase feldspars, the series is arbitrarily broken into six regions of composition (numbers refer to percentage of orthoferrosilite molecule in formula): 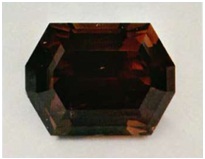 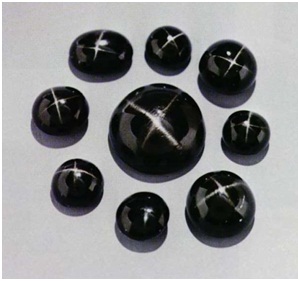 Most gem enstatites have indices in the range 1.663-1.673. The brown and green gems from Tanzania are enstatites, as are the brownish-green stones from Sri Lanka. Green and brown gems from India and Brazil tend to be in the bronzite composition range. The gems of the orthopyroxene series are usually very dark, slightly brittle because of cleavage, and generally not appealing for jewelry purposes. The 4-rayed star gems are widely sold at a very low price, and the material is extremely plentiful. However, clean gems of hypersthene and enstatite are not abundant, except in very small (1-2 carat) sizes. Even in this size the colors tend to be dark and muddy. These are all true collector gemstones. Orthoferrosilite is included for completeness and has no gem significance.