This is the nicest red zircon I’ve cut so far. It has a color that reminds me of a rhodolite garnet, and doesn’t show the secondary brown tones that many of the African red zircons display. It’s also not as dark as most of this size. The cut is a double barion design on the bottom, and a fancy sawtooth on the crown. Note that this is a ten sided stone. It also shows a bit of dispersion or diamond-like color flashes in sunlight. None of the other larger red zircons I’ve cut did that, probably because they were darker. 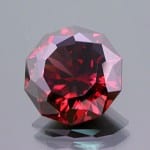