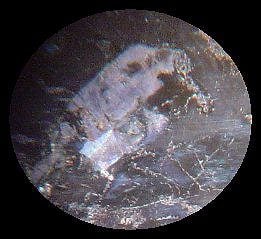 Hyperitdiabas is one of the most outstanding minerals I have encountered in recent years. Its appearance striking beautiful and a close inspection reveals still more delights. It has all the properties of a commercially important gemstone, but its rarity will keep it on the sidelines.

No list of minerals will ever be complete. While new species are rare, new varieties are constantly being found. Composite materials have so many variations, not all of them receive a name. I have a desk set made from a Brazilian material. It is one of the most beautiful stones I have ever seen, being a rich green, with pyrite flakes adding sparkle. It was marketed as “Imperial Stone,” but it never received an official name. Some years ago, I dealt with another interesting material that had red garnets suspended in green peridotite. It was dubbed the “Christmas Stone,” due to its coloring, but it never received an official name either.

I was recently presented with a specimen from Skåne, Sweden which local geologists call hyperitdiabas. As rare minerals go, this one is exceptional. It is jet black with silver inclusions, some of which are clearly crystallized. (See photo.)

On examining the material, I found the refractive index to be approximately 1.54. This made me think that it might be a chalcedony, however the density was measured at 2.96. That is too high for chalcedony, but the two factors do not match any known material. I also discovered hardness tested slightly low at 6.

It has an irregular fracture, with elements that are granular and others that are splintery. Also important is the polish. Hyperitdiabas takes a very high polish. This makes for a stunning gemstone!

Of prime interest were the silver inclusions. This looked identical to some silver in garnet specimens I have from Virginia, USA. Some are of them crystallized, others are in veins. However, they tested the same hardness as the surrounding matrix. They are not metalic, but are very interesting. Both gem cutters and mineralologists will be delighted with this material!

Hyperitdiabas is one of the most outstanding minerals I have encountered in recent years. Its appearance striking beautiful and a close inspection reveals still more delights. It has all the properties of a commercially important gemstone, but its rarity will keep it on the sidelines.

I have been a gemstone enthusiast since I was a young boy. My passion now are ETHIOPIAN OPALS!