Optic character is another useful clue in gem identification. This property exists in every doubly refractive gem but not in singly refractive or amorphous materials. The optic character of many gems can be determined with a polariscope, but you’ll need a refractometer to test some gems.

There are five possible optic characters:

You can usually ascertain the optic character of a gem from the notes you took while testing it for double refraction. Interpret the results as follows.

The gem is uniaxial if both refractive indices (RIs)  remain the same in each position or if one RI remained the same and the other varied. (While doing this, you should have found a position with only one RI).

If you didn’t find a place where there was only one RI, you’ll have to test the stone again on another facet. The gem won’t rest on another facet as easily as it does on its table. You’ll have to hold the facet against the hemicylinder to do this. (Be very careful not to scratch your hemisphere! Remember…

One of the rarer varieties in the garnet group, Mali garnet is a blend of grossular and andradite. This gemstone has great brilliance and a high dispersion.…

A versatile gem and the famous January birthstone, garnet is a favorite among jewelers and consumers. Learn how garnets form and how they get their… 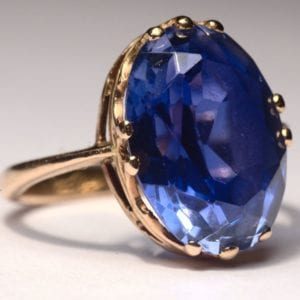 How to Clean Your Gemstone Jewelry

A little gemology goes a long way. Learn how to clean your gemstone jewelry safely and how to deal with difficult jewelry settings and sensitive…