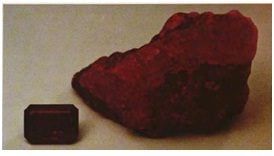 Zincite is a very rare mineral. It’s also difficult to cut, which makes faceted zincite one of the rarest of all gems. However, “accidental synthetics” (industrial by-products) have entered the gem trade in far greater quantities than their natural counterparts.

Franklin, New Jersey: only major locality; massive red ore, also in crystals up to 4 inches long, but these were found only in secondary calcite veins.

Comments: Zincite is a very rare mineral, essentially restricted to one important locality. Well, terminated crystals were found only up to about 3-4 inches, but larger masses, weighing several pounds, have been encountered in the ore bodies. These are not especially interesting, but cabochons with red zincite, green willemite, and white calcite, peppered with black franklinite, are unique to the Franklin occurrence and are extremely beautiful as well as highly fluorescent. Spheres have also been cut from this material. Cut zincite is one of the rarest of all gemstones. It is seldom completely transparent; usually it is slightly cloudy or translucent.

Name: In allusion to the composition.