This sunstone was cut from the second and final half of the darkest red Oregon sunstone I’ve ever seen, and I used to live in Oregon and have looked through hundreds of kilos of sunstone rough. It has quite a bit of copper schiller in it, but I cut it to minimize the appearance of the schiller and maximize clarity, though it shows well from side angles. In person, people will likely assume this is a pigeon blood red Burma ruby. Video gives a better idea of what it looks like than the photo does. 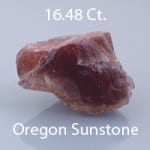 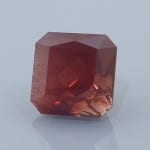 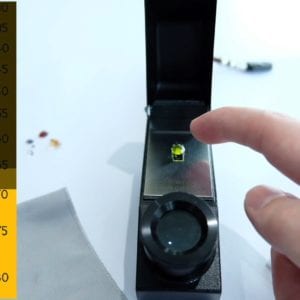 Learn to Use a Refractometer (Video)

This refractometer tutorial video will show you how to find a gem’s refractive index, birefringence, optic character, and other properties.…

Learning how to conduct a gemstone examination takes practice. Follow an expert gemologist step-by-step through tests of five unknown samples.…

How to Estimate Gem Weight in a Jewelry Setting

Although you can’t weigh a gemstone in a jewelry setting, you can get a close approximation of the gem weight by determining its volume.

How to Measure an OTL Gemstone Refractive Index

Measuring “over the limit” (OTL) refractive indices can help distinguish diamonds from simulants. You can do this with a simple upgrade to…

What are Gemstone Absorption Spectra?

Learn how gems absorb wavelengths of light and how gemologists use gemstone absorption spectra to identify gems. There’s more to color than…

Can U suggest a cut shape for this cabochon?

Do you buy or sell coral?

Help with a Rayner Refactometer

Can you recognize the stone?