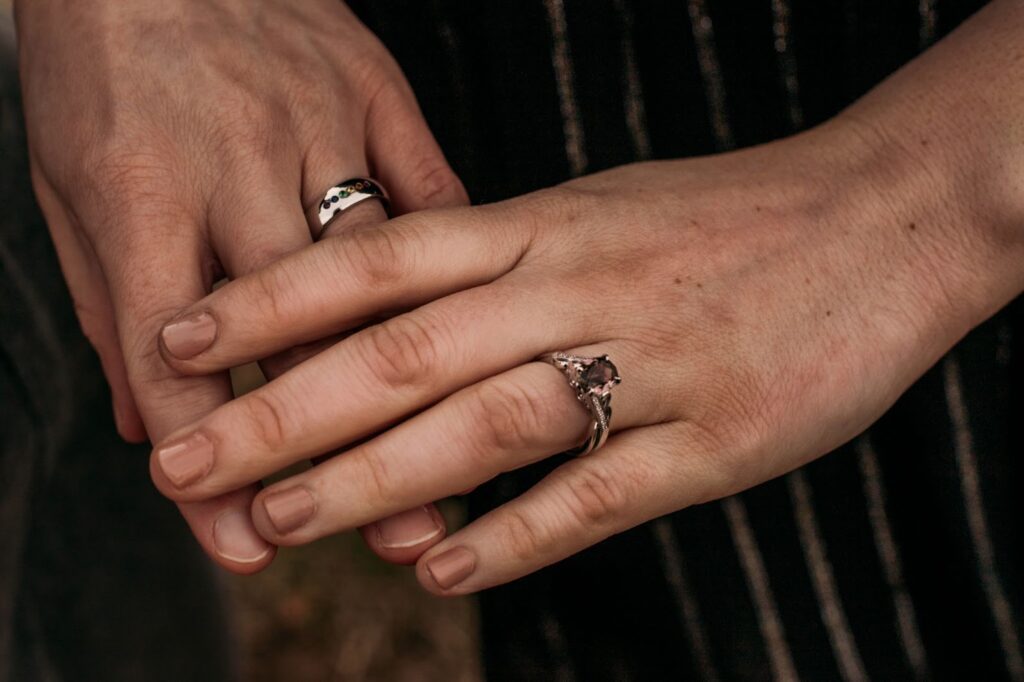 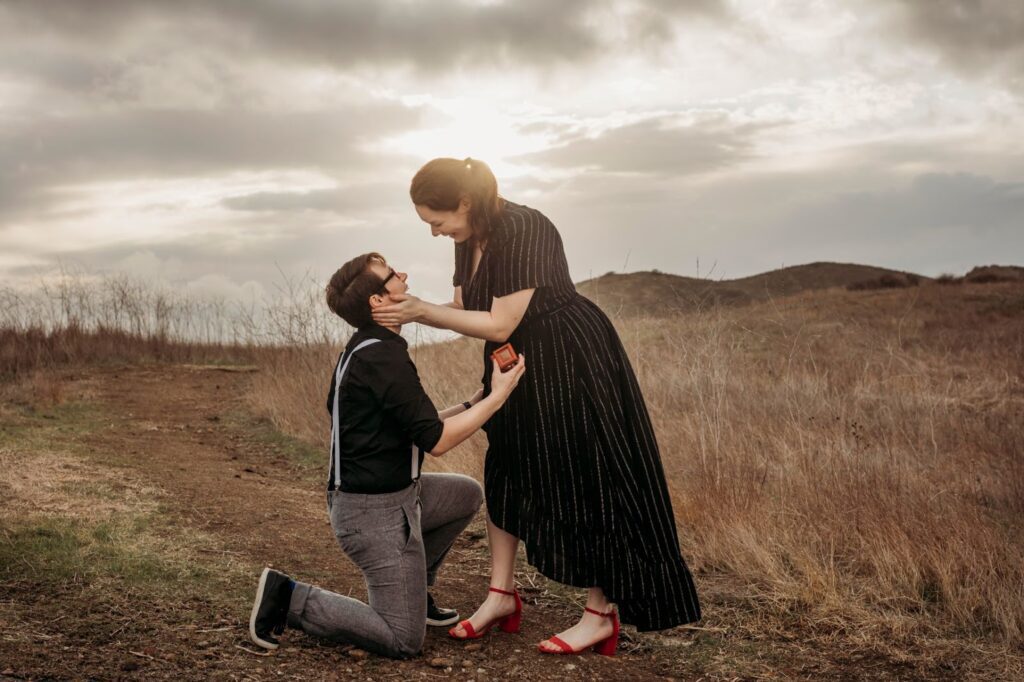 When Jessica Ames, 26, and Celia Hansen, 28, got engaged last year, both women ended up having the surprise of a lifetime.

What was supposed to be a regular photo shoot with their friend and new photographer, Sarah Feldhut, had turned into a double proposal the two had orchestrated unbeknownst to one another.

“I had been just carrying around the ring with me everywhere I went. But I had my suspicions about the shoot,” Jessica laughed. “I knew this was probably it, so I sewed a pocket into my dress. And after she proposed, I reached into my dress — and the look on her face is hilarious — and pulled the ring out of the little pocket.”

But, that wasn’t the only surprise that day.

“You know, after the initial shock, I had noticed the box and I was like, ‘Wait, is that the box the ring came in? Did you get it from CustomMade?’ And we realized that we did the exact same thing.”

After deciding to get engaged a few months prior, both women expressed they wanted unique and colorful engagement rings. Turning to the internet for help, both Jessica and Celia found CustomMade.com and each decided to entrust its help with making this day, and their rings, one of a kind.

“I Googled for about, I don’t know, 24-hours straight. I knew I needed a masculine, thicker band and that I wanted this rainbow design inlaid because she loves everything rainbow,” Jessica told us. “I had this vision, but I couldn’t find anything that matched it. And I had to make that vision come true because this is the ring we’re going to wear for the rest of our lives!”

After reading many reviews and speaking with the designers, Jessica knew that CustomMade was the company to help bring her engagement ring vision to life.

“The designers were amazing,” Jessica admitted. “I knew how I wanted the spacing between the stones, the way they were set and flush with the band. And the designers got me sketches and estimates super fast. I had the ring after just a couple of months. And Celia obviously had it ready by that time, too.”

Celia’s ring features a rainbow of sapphires on a white gold band, whereas Jessica’s ring has classical, romantic influences with a unique stone she holds dear to her heart flanked by diamonds.

“My mom is the most important person in my life. She’s walking me down the aisle! And as a kid, she took me rock-hounding all the time, and we went sifting for tourmaline a few times and we found these really beautiful watermelon tourmaline pieces. They’re probably my favorite stones. So, it brings up a lot of positive memories.”

The stone Celia chose for Jessica boasts those classic watermelon tourmaline features, fading from pink to green, and changing in intensity depending on the light shining down on it.

The couple, who are set to be wed in June 2022, are also part of a growing trend around more colorful, non-traditional engagement rings.

“Over the past few years especially, we’ve seen a real increase in customers designing engagement rings without the traditional diamond center stone,” explained Ty Wilson, Chief Operating Officer at CustomMade. “I think people want something unique that speaks to them and their partner, and you can’t always find that regardless of whether you’re shopping online or walking into a store. It’s stories like Jessica and Celia’s, where we bring their visions to life, that make us so happy to do what we do.”