The least expensive digital scale for gem use is now the GemPro 50. It sells for around $150, which is quite a bit less than anything else on the market. I tried one and was pleasantly surprised.

It weighs to 50 carats in .01 increments. I checked the weights on a couple dozen gems I had previously weighed and the scale is accurate. I found it easier to use than my more expensive Vigor. For lack of a better term, there seems to be a better “shock absorber” under the pan. It doesn’t start to weigh until the pan comes to a rest, which means less zeroing of the scale.

This scale comes in a hard case that folds closed for storage. Inside there is a place for the calibration weight and a pair of tweezers. In addition, it comes with a built in wind guard, which is a nice feature.

I was surprised that it does not have rubber feet, but comes with a separate pad to place the scale on. That was the only thing that disappointed me.

You can find them at several places on the Internet. If you need a link, I got mine from Old… 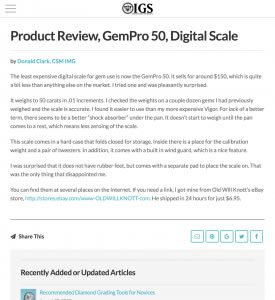