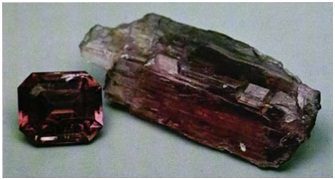 Tremolite occurs in contact and regionally metamorphosed dolomites, in magnesian limestones, and in ultrabasic rocks.

It is possible to misidentify tremolite, mistaking it for other amphiboles. Hexagonite is the rarest of the gem varieties of tremolite. If tremolite occurs in very tiny fibrous crystals, densely matted and interlocked, it is then known as nephrite (jade). Material containing more or less parallel fibers is somewhat chatoyant and yields weak catseyes. These are sometimes called catseye jades, but have been tested and are actually tremolite or (if more iron-rich) actinolite.

From the Tremola Valley on the south side of St. Gotthard, Switzerland. Hexagonite was so named because it was thought to be a hexagonal mineral when first described.