I have said that I prefer Gemray and do not like the light models in GemrayX, particularly the head shadow or ray trace. These are my own personal opinions and preferences. A few notes. On the head shadow, I am trying to put it in average person terms. Basically I think head shadow as shown by GemrayX and some “experts” is just incorrect. Or maybe their assumptions of how much head shadow will show is what’s wrong.

My main point is that the GemrayX ray trace (head shadow) is not what a finished gemstone looks like. Gemray in all 3 light models is pretty close. GemrayX with head shadow is not close at all in most cases. The point really is that the Gemray models are accurate and what the average cutter will see in real life. In other words it is accurate enough to pick designs using it.

Nothing is perfect in life and these are all just computer models. You have all heard me say the real proof is in a cut stone of the design and a picture of that cut stone. But the Gemray light models will give a pretty close approximation of the cut stone. Which is why I go to all the labor to include the ray traces with my designs.

Here is another article you should read: Gemray vs GemrayX Image Rendering.

What is head shadow? Well in a nut shell, it is the shadow cast or light blocked from entering the faceted gem stone by the person holding the stone.

Below is a diagram of basic head shadow. Please note that this is just to illustrate the concept, the drawings are not to scale and not meant to be all that scientific. I am just trying to give you an idea of what I am talking about.

The only way the above model of head shadow works or could happen in real life is if you were in a dark room or closet with a light bulb behind you at about shoulder height. Even assuming this, the light will reflect off of the ceiling, walls, and floor causing some light to come into the stone and not be blocked. You could eliminate a lot of the reflections and light bounces if the room was painted black, like a photography dark room. But who would ever look at a gem stone under those conditions?

The point I am trying to make is that the above head shadow model is not true to life and it only is taking into account one direction of light. Not the many variables of light and reflections that happen in real life. In the real world there is ambient light all around us and light reflects off of almost all surfaces.

Below is a more true to life model of head shadow. 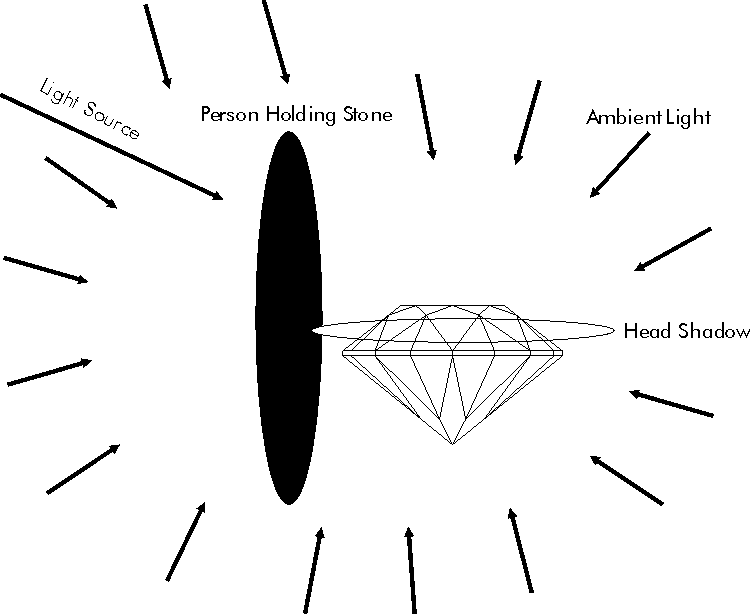 Note: In the above model, all the little arrows are ambient light. Notice that the light is from all around the stone and person holding it. This is a much more true to life model and as you can see in a lot of cases if not most cases there is plenty of light available from all around the person and stone and that head shadow may not exist at all or at the worst case would be very minimal.

Ambient light or another light source from another direction may/could completely cancel out any head shadow effect, even in this model. Want a very typical example? How about an over head light behind you and a window letting in day light in front of you when you are viewing a gem stone.

Below is a more true to life model where there is no head shadow.

Above: The light is directional from the opposite direction (coming towards the person holding the stone) and in this case there is of course no head shadow. So why use a head shadow in the light model in this case, and most other cases too?

Note: In the above model I am not showing ambient light, but in a real situation it would be there.

Below is a more true to life model and a different way to picture the light. 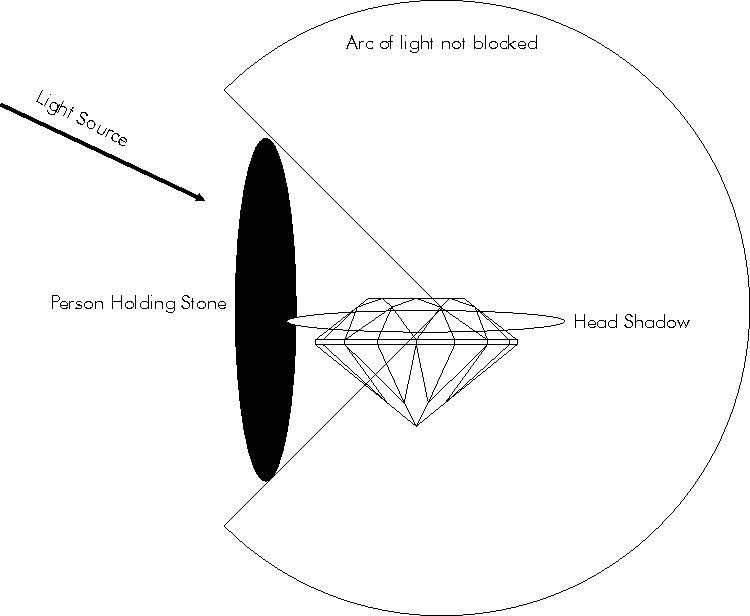 Above: The light is coming from all around the person and stone. Notice the the light coming from behind the person is blocked. But also notice that the amount of available light represented by the circle/arc is roughly 75% and the blockage is 25%.

Note: It is also very important to realize that my models are all 2D. Life is 3D and light will come at the person and stone from every direction. From the top, the sides, the ground, reflected and so on.

In real life gemstones are viewed under all types of lights and situations and in almost every case there is light coming from many directions.

Light is almost always coming from many more than one source – Look around you in any place you look at a gemstone. There is light coming from overhead, through a window, a light beside you, reflected light. well you get the idea.
Light is reflecting off of surfaces from all around us – Light is not just directional, it bends, reflects and bounces off of all types of surfaces and around us.

OK why do I not care for the GemrayX head shadow? For starters I doubt that there is a reliable way to predict what the lighting situation(s) a given stone will be viewed under. If you cannot predict that the light is being blocked, or not being blocked, or from what direction(s) the lights are coming from. How can you make an accurate GemrayX head shadow model? So why bother? The GemrayX head shadow model makes the assumption that there will in fact be head shadow (light being blocked). Depending on the lighting situation this may not be the case at all. In fact I would make the argument that in most cases there is no significant light being blocked. I can easily make the argument that in most cases the person holding the stone will have light coming from above them. Do not believe me? Look up, there is almost always an overhead light in any room. Of course if the light is from above, no head shadow. I can also make the argument that in almost all average viewing conditions that the majority of the available light is coming from the side, above, the front, and reflected from surfaces. Very little light is blocked, if any light is blocked at all depending on the lighting conditions. In other words the most light is coming from the sides, top, reflections, and from in front of the person holding the stone. Which would in all likelihood eliminate or at least minimize any head shadow.

Note: This maybe an obvious point, but nobody, faceter, jeweler, or customer, holds a cut gem stone and then blocks the light when looking at it. Everybody looks at cut stones in light, not in shadow.

I can go on but you certainly get the picture. But to me the most conclusive evidence is cut stones. I actually cut the stones and compare them to the ray traces. I want a ray trace that looks like what my cut stone is going to look like or close. I am looking at my actual cut stones in real life and if there is any head shadow, I would/will see it. The bottom line here is that I see very little or no head shadow in my cut stones.

I would point out though that in low light conditions I find that the Gemray ray trace light models are quite close also. Specifically the COS, and ISO models look very close to my cut stones in real life.

Above: Gemray ray trace of “Dutch Petals” (Random, COS, ISO)

Gemray looks like my finished stones. GemrayX with little or no head shadow is close, but not as good. The default head shadow in GemrayX is not close at all to what I am seeing.

I have stated I prefer Gemray. However no model can predict every thing and the only real way to know how a design looks is to cut it in real stone. Which I do. The real test is the finished stone. How does the finished stone perform? Do I like it? That is the answer. Everybody will use the tools/programs they like best to reach their goals. Which is a pretty finished stone. What ever works is OK with me. I would advise people to cut designs and then compare them to Gemray and GemrayX with head shadow and make up their own minds on what they see. That is the best way to know. I personally prefer no head shadow settings in my ray traces and like Gemray. I do not think the head shadow is an accurate model in real life.