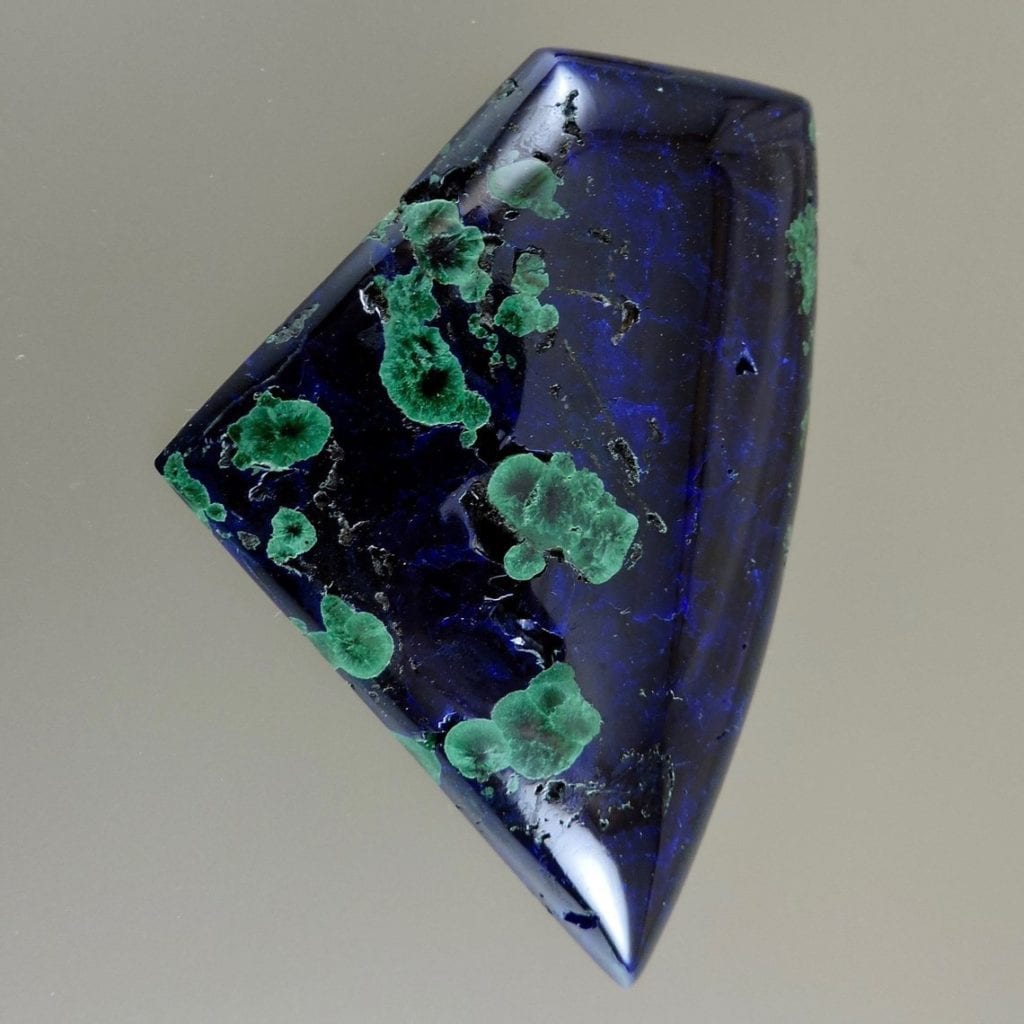 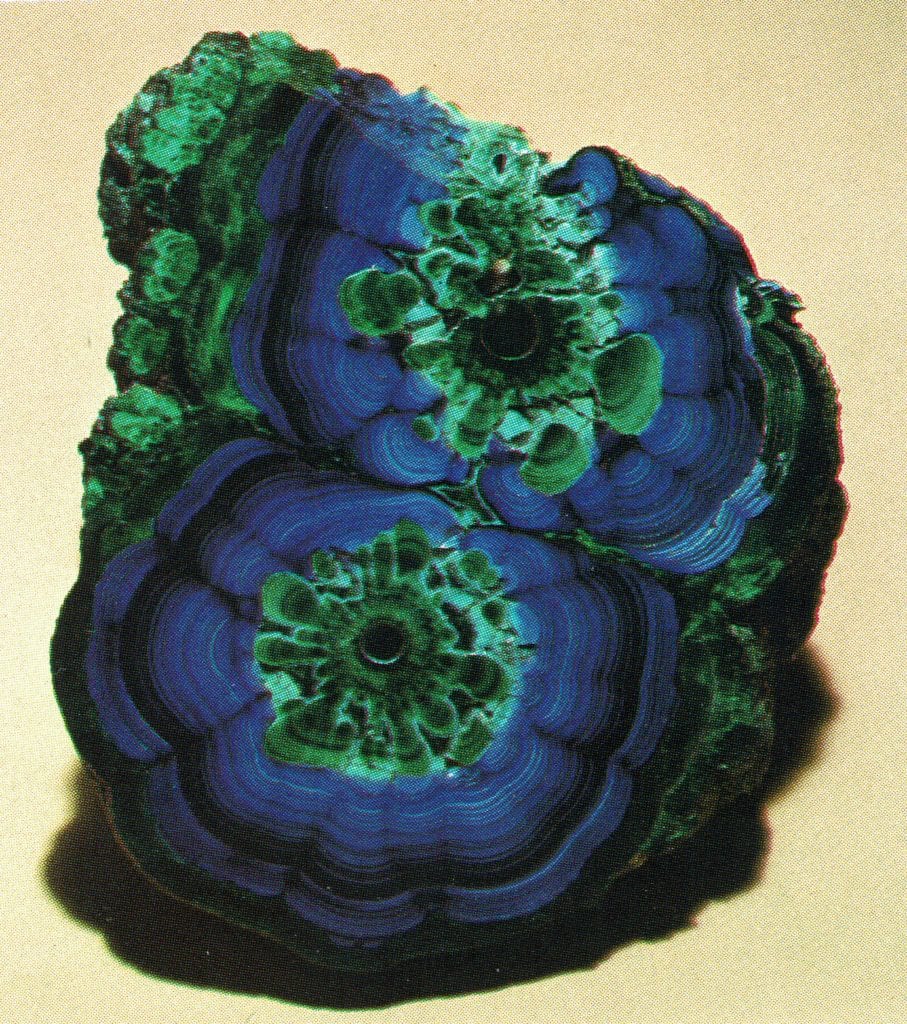 Azurite occurs in fine crystals in many localities. When it occurs in massive form, the material is almost always mixed with malachite, another copper carbonate mineral. Lapidaries cut this mixture, called azurite-malachite or azurmalachite, into very attractive cabochons and large decorative items, such as boxes.

Burnite is a mixture of azurite and cuprite (copper oxide). 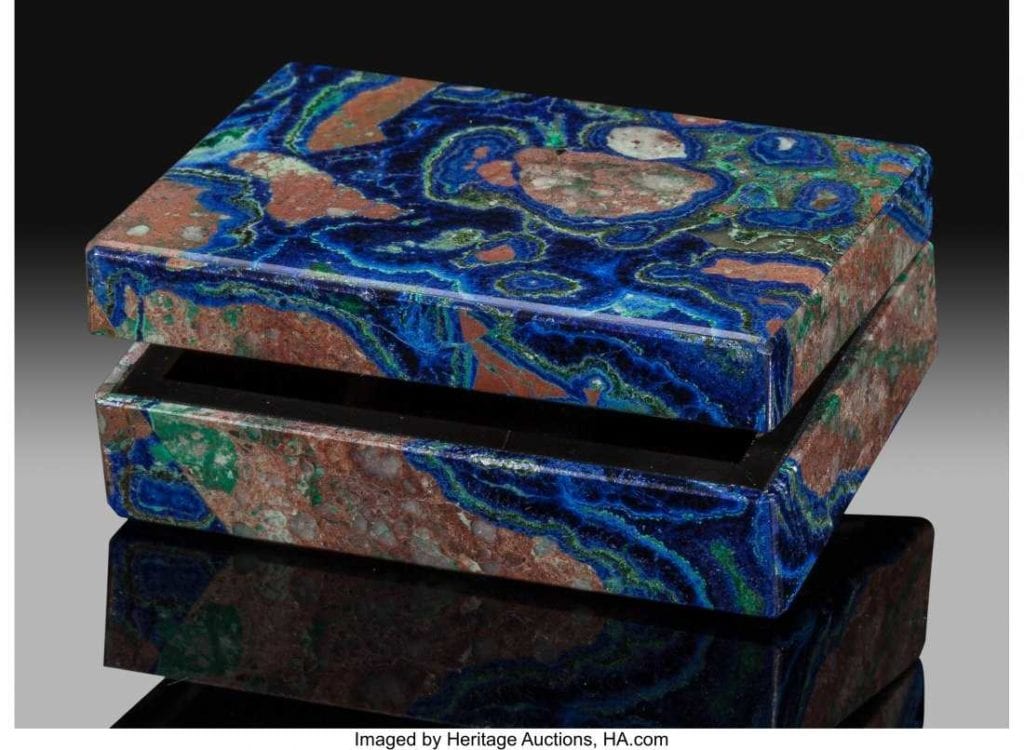 A jewelry box carved from azurite with patterns of malachite and cuprite, 7.62 x 5.38 x 2.54 cm. Photo courtesy of liveauctioneers.com and Heritage Auctions.

Since azurite is more unstable than malachite, it often pseudomorphs into malachite. This means its chemistry changes to malachite while retaining azurite’s external crystal form.

Azurite’s distinctive, intense blue color makes it a popular collector’s stone. However, even small azurites are extremely dark, virtually black. Since azurites have such low hardness (3.5-4) and great sensitivity to heat, faceting them is also very challenging. This combination of factors makes faceted azurites very rare. 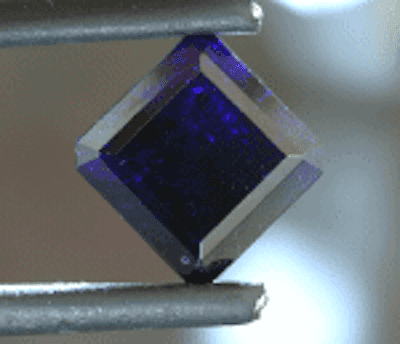 Artists have used blue pigments made from azurite since ancient times. Perhaps not surprisingly, people have confused this stone with lapis lazuli, another well-known historic source of blue pigments. Sodalite, another gem material commonly cabbed and carved, is sometimes confused with azurite as well.

Although these materials may show similar colors, azurites have a higher refractive index (RI) and specific gravity (SG) as well as a lower hardness. Azurites are also birefringent, while lapis and sodalite are not. 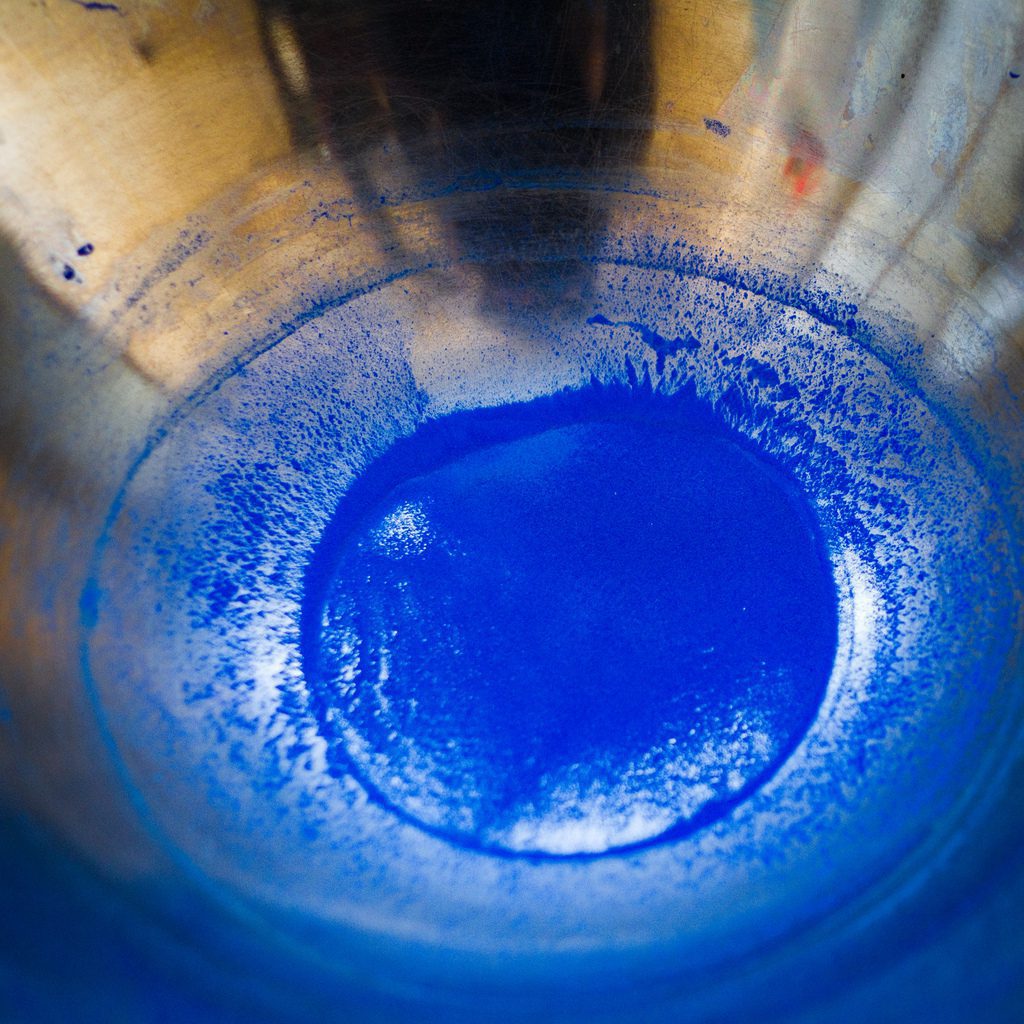 British artist Michael Price has researched the pigment preparation techniques of the Renaissance masters and prepares natural pigments from minerals like azurite, shown here. “Into the Blue / 20100316.7D.04570 / SML,” photo by See-ming Lee, taken during a visit to Michael Price’s studio in DUMBO, Brooklyn NYC. Licensed under CC By-SA 2.0.

Scientists have synthesized azurites for geological research as well as research into pigments. Crystals have also been created in labs. However, due to azurite’s physical limitations, any such lab-created material would make an unlikely option for jewelry use.

Nevertheless, you can easily find “synthetic azurites” for sale online, especially in jewelry. Be aware that “reconstructed” azurmalachite — a compressed and stabilized, plastic-impregnated form of azurite and malachite — can be cabbed and has good color and toughness. This material has been available since 1989 at the latest, and by 1992, imitations of azurmalachite in jewelry were popular (if not always convincing). More recently, such materials have been found to contain artificial veins of copper.

It’s possible vendors are selling this “reconstructed” material or other simulants as “synthetic.” In such cases, “synthetic” means imitation or “fake” in the popular sense. These stones aren’t identical optically and physically to the natural, mined material. Buyer beware.

Although natural azurite is a coveted collector’s stone, it’s still not very well-known to consumers. Thus, some vendors may misrepresent azurites as “copper lapis” or “Arctic opal,” perhaps to garner more sales interest by associating them with more popular gems. Of course, azurites aren’t lapis or opals but a distinct gem species.

For more examples of false or misleading gemstone names, read this article. 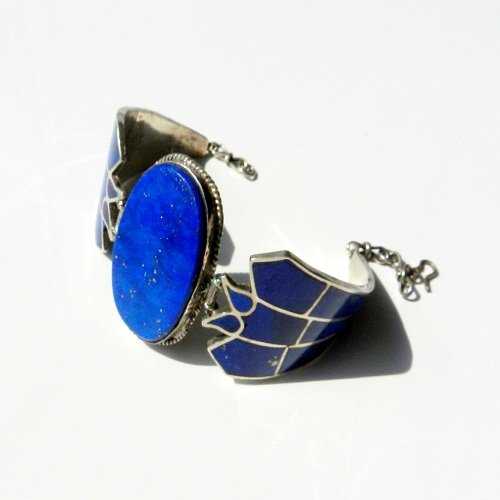 Notable gem-quality localities include the following: 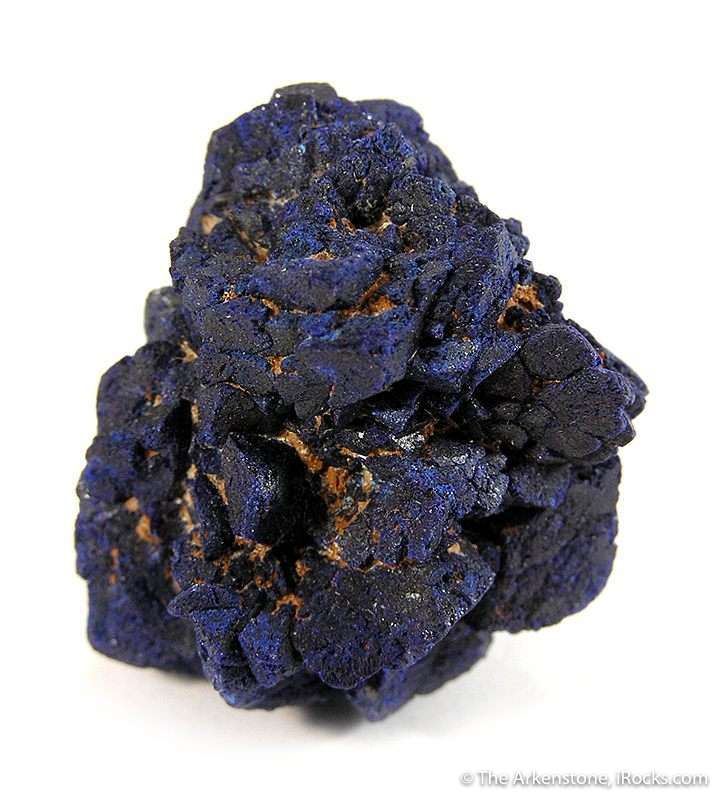 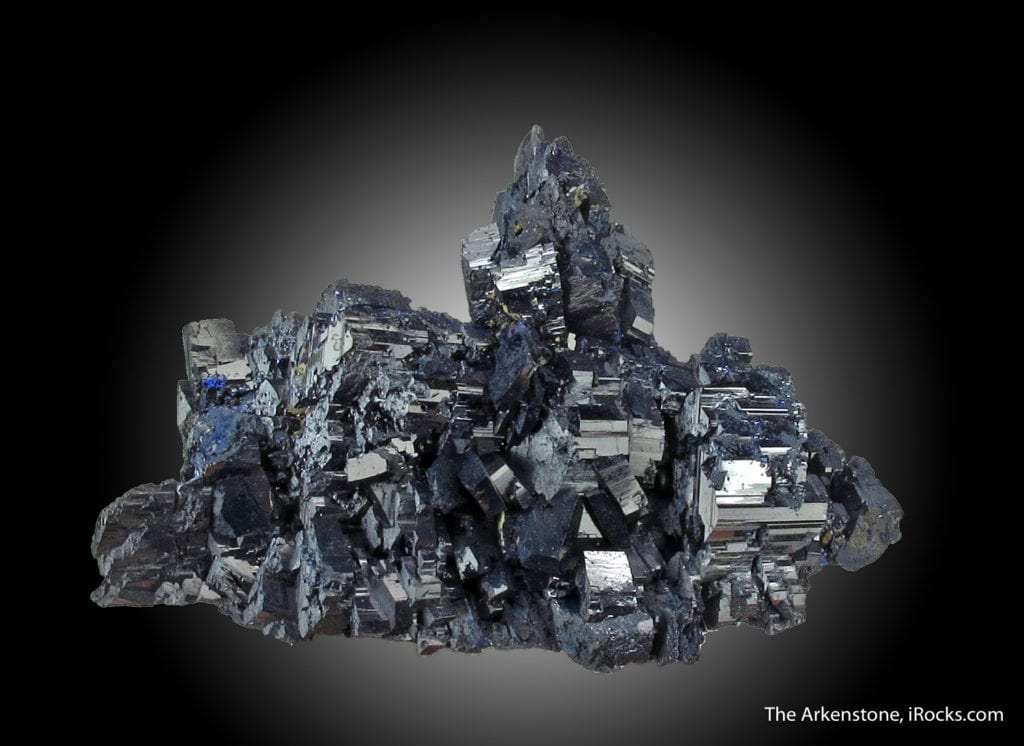 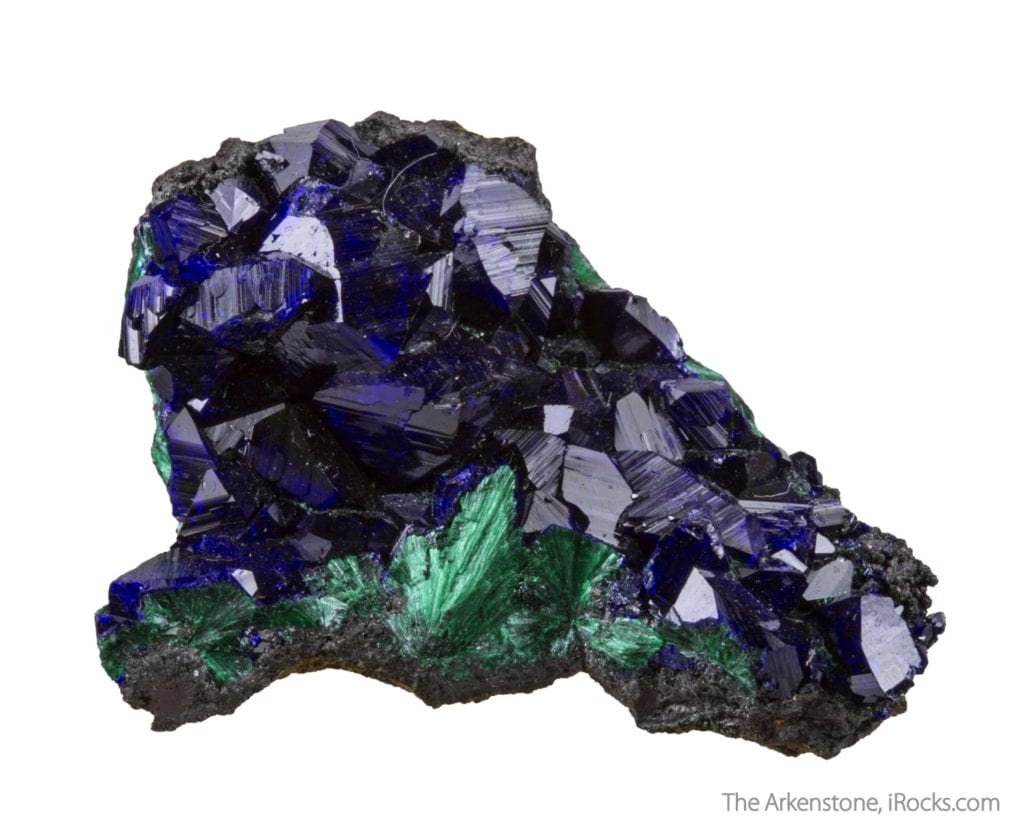 Facetable crystals are always tiny, and cut gems rarely weigh more than a carat. Larger stones would most likely be so dark as to be opaque. Gem cutters sometimes take dark blue crystalline material and create cabochons up to several inches across. 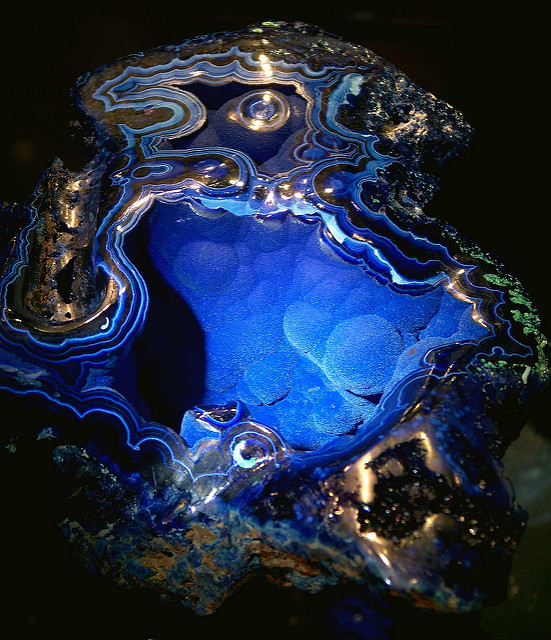 “Velvet Beauty,” a stunning azurite specimen, weighs 3 pounds and measures 9” in diameter. It was discovered in 1890 in Bisbee, Arizona. Photo by cobalt123. Licensed under CC By-SA 2.0.

In addition to its relatively low hardness and brittle tenacity, azurite will gradually lose its blue color when exposed to air, heat, and light. Thus, reserve these gems for occasional jewelry use with protective settings. Store them separately from harder jewelry stones, in darkness, and sealed to reduce contact with air.

Azurites are difficult to facet due to their low hardness, perfect cleavage, and heat sensitivity. Furthermore, their copper content makes their dust toxic. Accidental ingestion could lead to acute distress, like vomiting, and chronic exposure could lead to liver and kidney damage. Faceters should wear protective masks and, ideally, use a glovebox to prevent inhaling or ingesting azurite particles during cutting and polishing. Wearing or handling finished pieces should pose no hazards.

Clean these gems only with water, mild detergent, and a soft brush. Avoid any cleaner that contains acids. 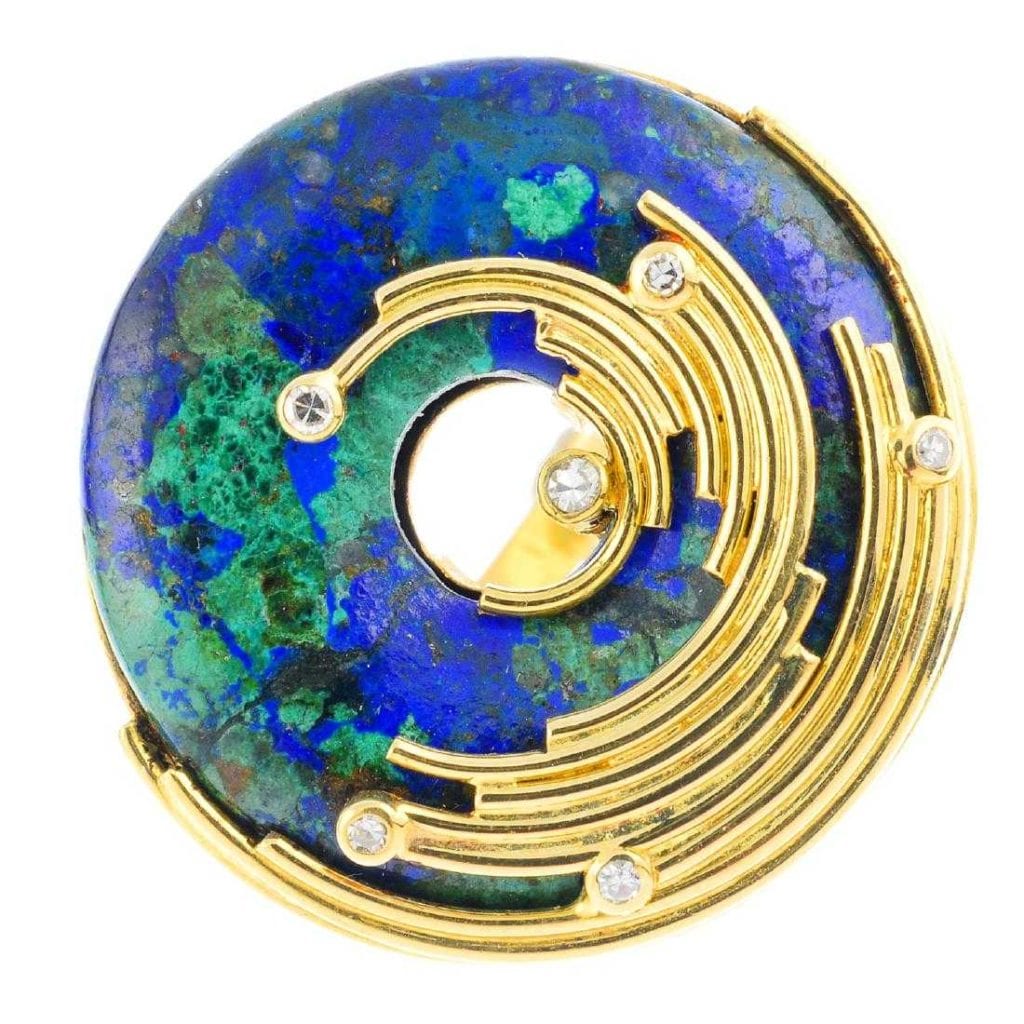 Azurite dress ring with single-cut diamond highlights, about 2.8 cm across. Photo courtesy of liveauctioneers.com and Fellows.