How to Carve, Sculpt Gems 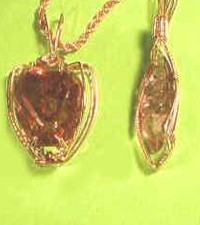 Once upon a short time ago, all faceted and cabochon cut gemstones displayed atraditional disciplined shape.  Faceted stones featured a round brilliant cut or one ofits variations, and cabochons routinely were cut in rounded or domed geometric patterns such as ovals, squares and circles.

Along came some enterprising lapidaries and they started mixing the two disciplines. Not only did they start cutting facetable crystals using cabochon techniques and vice versa, but they also began adding peculiar channels, tunnels, dish effects, plateaus, and step conceits.  These innovation quickly caught the gemcutting world–and the world of Fantasy cutting has been flying ever since.

A German gemcutter named Bernd Munsteiner really got Fantasy–orSculptured – lapidary started.  The lapidary world was slow in accepting his unique,geometric designs but once started they took off . . . largely because they were so visually pleasing–and easy to cut.

How do you cut those well-known, severely geometric appearing Munsteiner or Fantasy cuts?

Well, it’s actually easier than traditional faceting or cabochon cutting.  Select a piece of gem material (it’s better to cut softer materials because many of the intricate patterns that make up fancy cutting can be difficult to prepolish and polish) and shape it by hand on a coarse wheel or lap (coarse is NEVERless than 180 grit!). 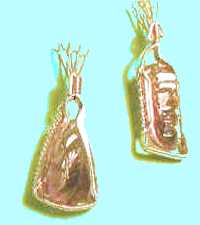 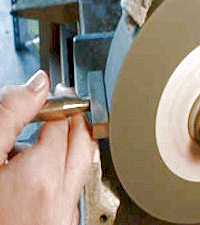 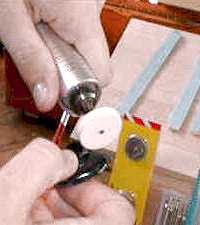 (A) the gemstones you see above (left) were shaped, one by hand or the other while mounted on a stick. Once the basic shape was achieved, a silicon carbide wheel’s edges

(B) were trued with a diamond dresser tool to assure sharp right angles (vital for cutting channels and other optical conceits.) Following these two initial steps, the sequence followed by experiencedFantasy cutters

(C) ) imparts artistic elements over the surface – top and bottom – of the stone.  The final step

(D) consists in applying a fine finish on all the cut edges (EXCEPT in those cases where it’s decided to offer a surface contrast such as leaving some surfaces “frosted” i.e., unpolished, to make them stand out against the more reflective surfaces (a technique that is achieved best only with quartz which frosts easily).

It goes without saying that most of these artistic effects are cut on the sharp or uniquely dressed edges of the silicon carbide wheel.  Diamond wheels are superb for fast roughing and finishing, but they’re near useless for channeling and plateauing simply because they can’t be dressed – and most diamond wheels have no side edges to work with. In short, the embellishments consist of whatever the sculptor or carver can think up. Behind this apparent indifference to traditional optics theory lies the desire to maximize the enhancement of surface reflections, scintillation (also called “twinkle”), texture properties, surface light play, visual interest in new and different shape configurations. The final step in this 1-2-3-4 sequence is #4 polishing.

The shift in emphasis from internal to external dramatization is not without benefit.  Brilliance, the term used to describe the return of internal white light whose impact varies inversely with distance, virtually disappears when a gem is viewed rom more than two feet.   Visual recognition of shape and light variation, though, is possible up to 10 feet and it’s around this unavoidable truth that the sculptor hangs his visually pleasing contributions. You can see and appreciate an oddly sculpted Munsteiner from a much greater distance that the brilliance of a traditionally faceted gemstone.

Once the broad flat facets and lines of the shape have been cut in – and before the exquisite channeling and other lapidary devices are employed – many gemcutters proceed directly to prepolish and then polish.  Such a half-way step gives one an attractive finished stone appearance albeit it may appear somewhat plain.  The interesting geometric shapes and channels on a Munsteiner cut are (C) usually cut strictly on the edge of a dressed silicon carbide wheel.  Refining, prepolishing and polishing are often carried out (D) with small wheels, sanders, polish bearing sticks, etc.

This intersection is  where the carver-sculptor begins applying his or her true creative skills.  Often, cutting and/or channeling on the squared, dressed edge of a silicon carbide wheel (diamond wheels aren’t so good because they don’t cut on the side, too) the carver – using a single motion – inflicts a deep channel with 45 degree sides. The channel is cut in one moving, continuous motion.  Were s/he to cut the channel in a series of addresses to the wheel, it would introduce “planing” and this is virtually impossible to polish later. 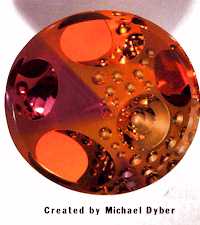 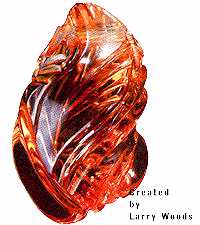 The above display of imaginative gem cutting displays vividly the range and sweep and the random creativity – that can be accomplished by combining cabbing with faceting methods.     More could be said on the techniques of this style of gemcutting, but it’s not necessary.  You simply cut a shape, apply your own personal conceits to the surface, polishing the whole thing – and you have a finished, professional level Fantasy cut.  Likely as not, the stone never leaves the lapidary’s hands.  With considerable justification, many gemcutter contend that no great need exists for dopping (gluing a stone to a stick so you can hold it more securely) and the cost of equipment is minimal.  Most of the lapidary activity is conducted in a hand held mode because the fingertips give much greater and more precise control of the stone.  It’s easier, too, to refine and shape the stone with small diamond abrasive tools, wheels, etc. Indeedsome gifted carvers, use an inexpensive lathe and make their own cutting tools out of wood, plastic, buttons, metal dowels, etc.

What happens when a transparent or translucent gemstone crystal is covered withrandom and artistically flat surfaces is a transformation of the stone–usually–into ageometric appearance.  This occurs especially when channels are introduced becausethey are often cut in a parallel series.

Keep in mind that Munsteiner-Fantasy cutting is an extension of advanced cabochoncutting and carving or sculpturing represents a completely different discipline.  Mayexcellent carvers or sculptors turn out magnificent gemstone creations, often usinglapidary optical tactics – but their ideas are not Fantasy cutting.

This article is part of a series as follows:

These ten gems are some of the rarest and most desired in the world. If money is no object, consider one of these stones for an expensive engagement…

For faceting, the distinction between gems and minerals is usually clarity. However, learn why the decision to cut may be an aesthetic or even a…

Andradite is one of the most sought after garnet species. Although more sources have been discovered in recent decades, gem-quality andradites…

Judging gemstone value is complex, and new gemologists can have trouble with this. These four exercises can help you learn to evaluate “bargain…