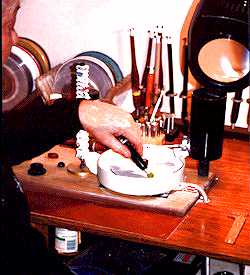 How to Facet Gems

by Dr. Gerald Wykoff GG CSM , International Gem Society
To the average person, magnificently faceted diamonds or colored gemstones appear so complex. How do faceters manage to cut all those bright, tiny facets? It must take enormous talent. We faceters often hear questions and comments like these.

Don’t be fooled. Gemstone faceting only appears complex. Artistic and mechanical talent aren’t the critical factors for success. Patience is the key. 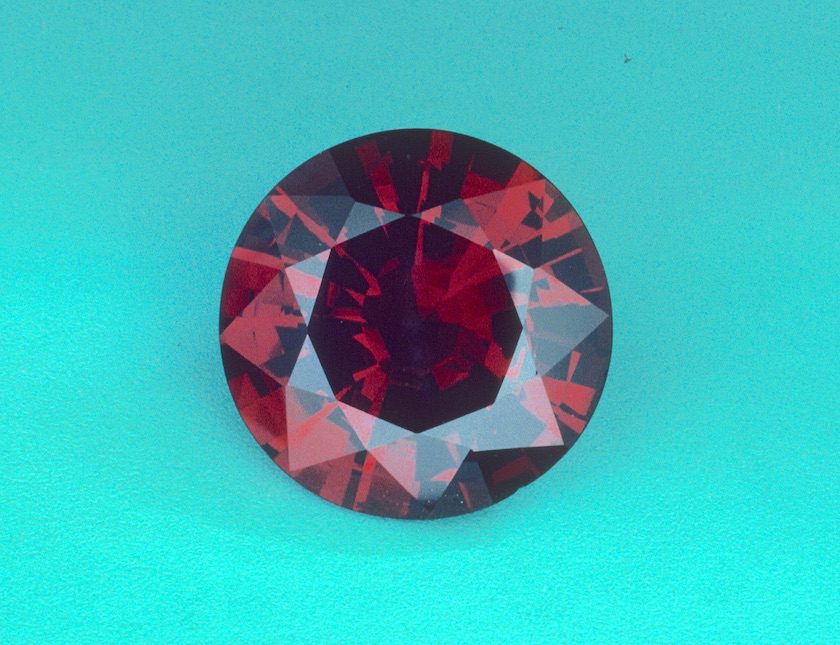 HAI: More Than an Idiom

Usually, faceters will just nod smugly and make light of their apparent genius when complimented. They do this to keep you in awe. However, if you compliment honest gem cutters, they might respond with HAI, like the famous Japanese idiom. This marvelous, all-purpose expression means “yeh, yeh,… I suppose so… OK… I’m cool… I get it… I’m with you… go ahead, etc.”

In gemstone faceting, HAI is much more than a casual idiom. It’s an absolute ruling principle. It’s an acronym but also means “go ahead.” When faceters say HAI, it means it’s OK to go ahead and facet gems. Why? Because the vital triangle — H, A, and I — is locked and the faceters are in complete control of these three elements:

Faceting gemstones consists of mounting gem rough on a dowel or dop stick, which fits into the quill of a faceting machine. Next, the faceter touches the gem rough to abrasive laps in two sequential operations. First, they cut the top of the gem or crown, then the bottom or pavilion. What makes those beautiful, bright and tiny facets possible is the Height-Angle-Index triangle, which locks the gem rough in place.

The height controls the depth to which a facet is cut. This enables the faceter to establish even, uniform rows of same-sized, same-depth facets.

The angle establishes the plane upon which each facet is cut. This matters because the performance of the faceted gem depends so much on each facet having the correct angle. It needs just the right amount of “slant.”

The index refers to the placement of the facets around the shape or outline of the gem. For example, a round brilliant-cut stone, like most diamonds, shows eight main facets when viewed face up.

What You Need to Facet Gems

Take all the mysticism and incantation, secrecy and ritual, and downright nonsense about faceting. Roll it up into a ball and toss it on the scrap heap. Faceting consists of four simple elements:

How does HAI fit into this?

First, you glue or attach a gemstone to the dop stick, then set the faceting machine’s mast. This sets the height.

Next, you adjust the protractor or quill position. This sets the angle.

Then, you place the trigger grip in the numbered notch in an index wheel. This sets the index.

At this point, you lower the gemstone to the lap and monitor you cutting and polishing.

Everything that controls the HAI (mast, quill, and index wheel) is routinely locked in during setup, before a faceter even starts to cut. As a result, the faceter only needs patience — the ability and mindset to hold the locked-in-place stone against an abrasive wheel and watch the progress. Among faceters, “cut and look… cut and look…” is a time-honored reality.

The Round Brilliant Cut

There really isn’t much more to faceting than that. You can learn how to facet gems in a few hours. That’s all it takes to cut the most famous and easiest cut of all — the round brilliant. Nine out of ten gemstones receive round brilliant cuts or some variation. They dominate the field of gem cutting. How is this possible? The answer is simple. Modern faceting machines are actually milling machines. (It’s not by chance that the leading faceting machine manufacturers are machinists by trade).

The Five Ps of Gemstone Cutting

I have a system for evaluating the cut of any stone, diamond or colored gem. I call it the Five Ps of gemstone cutting. If you want to evaluate a cut stone professionally, even if you don’t want to cut gemstones yourself, keep these five factors in mind.

All natural stones have imperfections. An astute faceter has studied the gem rough and oriented it so that the cut gem minimizes the visibility of those imperfections and maximizes its positive qualities.

The points of a faceted gem — the edges and intersections, the meets and meetpoints — should join up precisely. This proves the facets were cut evenly and uniformly.

If a gem doesn’t have a smooth surface, the stone will appear dull. A fine polish will also show whether or not the gem was cut properly.

If the faceter established the vital triangle of HAI, the stone’s facets will reflect and refract external and internal light properly. It will perform optically, even when tilted or tipped. Such a gem will really contrast with a poorly cut stone, which will look like a see-through piece of glass when viewed through the top, straight down the table.

How to Facet Gems: The Fundamentals

Faceters focus on HAI to accomplish the Five Ps. Let’s examine how they do that in more detail.

Every faceting machine must form a right triangle so the target angle will manifest at the stone-lap intersection. To accomplish this, in a protractor machine, the faceting head is raised on its mast. In a jam peg machine, the quill’s tailpiece is placed in an elevated slot on the backboard jam. In both cases, the quills are locked at an elevation or height consistent with the stone’s diameter or width. This action coordinates the machine’s quill to the stone, so height is no longer an issue.

Once the faceter establishes the quill’s elevation, angle setting becomes a cinch. The mechanical protractor stop is set to the targeted angle, or the jam peg’s quill tailpiece is slipped into the appropriately numbered angle slot. This effectively assures that the cut facet will finish at the desired angle. Thus, setting angles involves merely a simple dial-up task or a put-it-in-the-right-slot proposition.

Placing all those tiny facets on a gem demands little more than slipping a trigger into a numbered gear notch or index. If the instructions tell you to put the trigger in the “2” notch to cut a particular facet, that’s what you do. The faceting machine will cut a nice particular facet at the right angle and at the place you want.

That’s it! Set HAI correctly on every facet and you’ll do well by the Five Ps every time you cut a stone.

There’s more to the lapidary arts than faceting. You also might want to learn about these other techniques.

Here are some Frequently Asked Questions about Gem Cutting.

How does the GemEx iLoupe compare to a standard jeweler’s loupe? Our review tests the device and app, designed for smartphones and tablets.

Disclosing enhancements to gems is a key duty for gemologists. Learn what are the hardest treatments to detect and how to report your findings clearly.…