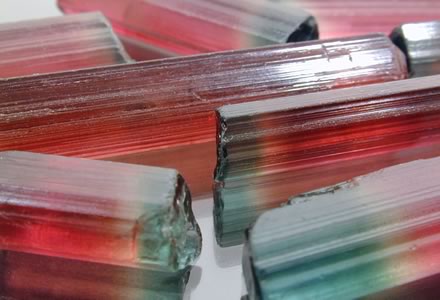 Tri-Color Tourmaline from Nigeria by Daniel Stair of customgemstones.com

Tourmaline is a name applied to a family of related minerals with widely varying properties. Tourmalines make very popular jewelry stones and come in an amazing range of colors.

Ready availability keeps tourmaline prices reasonable. Small tourmalines (under 5 carats) are fairly easy to obtain at modest cost. Only when you get into large sizes or extremely rare or fine colors do prices go over a few hundred dollars per carat.

Tourmaline crystals are often cracked and flawed, which puts a premium on clean gemstones, especially those over 10 carats in weight. Generally, the only acceptable types of inclusions in cut tourmalines are the tubes that, when densely packed, produce a cat’s eye effect in cabochons. The “eye” in a cat’s eye tourmaline can be very strong, especially when set against a richly colored gem.

For more information on tourmaline quality factors, see our buying guides for tourmalines in general as well as engagement ring stones.

You may also wish to consult the following articles for information on specific varieties: 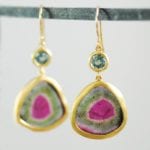 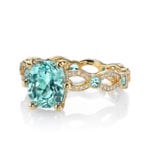 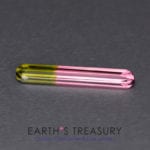 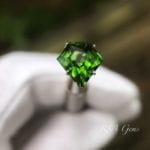 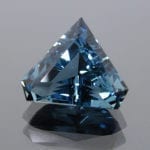 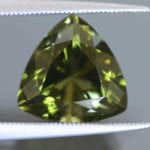 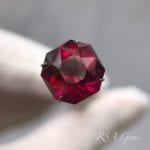 Tourmaline is a group of minerals that all have the same crystal structure, but vary in chemical make up, color, and other properties. Nine species are all you will find in older reference books. Fourteen are now known and there are still others being considered for new species.

Elbaite is the most common gem species, followed by schorl, dravite, and uvite. While rare, other species occasionally show up as gems as well. The properties of some species are so close that it is often difficult to make a distinction. For gemological purposes, it is sufficient to distinguish them all as tourmaline.

In most gemological literature, you will only find a limited range of properties for tourmaline. This is done to simplify the identification process. However, it has the significant disadvantage in that you cannot identify a gem that is not in your reference material.

Here is a breakdown of the properties by species. The ones most commonly used as gems are listed in bold italic type. Note that all tourmaline has the same hardness, optic sign, and dispersion.

Tourmaline is a name applied to a family of related minerals, all having essentially the same crystal structure but varying widely in chemical composition, color, and properties. The nomenclature of tourmalines is complex because there are nine distinct mineral species in the group, as well as a wide variety of names that have been applied to specific color varieties. Tourmaline crystals are abundant worldwide, are sometimes large and well terminated, and often are cuttable.

Tourmaline is one of the most popular of gems among collectors because it is usually inexpensive and occurs in a vast array of colors. The colors are due to an almost unbelievable complexity of chemical composition, to which John Ruskin‘s quip (1890) still applies: “the chemistry of [tourmaline] is more like a mediaeval doctor‘s prescription than the making of a respectable mineral”. Schorl, the black tourmaline, was used in mourning jewelry during the Victorian era, a practice little used today. Such material is seldom seen in jewelry at all in modern times. Tourmaline crystals are often cracked and flawed, which puts a premium on clean gemstones, especially those over about 10 carats in size. The only acceptable types of inclusions are the tubes that, when densely packed, produce a chatoyancy and catseye effect in cabochons. The eye in catseye tourmalines can be very strong, set against a richly colored gem. Tourmalines occur in a wide enough range of colors to satisfy just about any fashion requirement. There is no cleavage, and the slight brittleness of the material is not a major problem in wear. Small tourmalines (under 5 carats) are fairly easy to obtain at modest cost. Very large, fine-colored stones are both rare and costly, however.

Tourmalines come in all colors from colorless to black. Crystals are frequently color zoned along their length (bicolor, tricolor, particolor, and so forth) or concentrically zoned (watermelon tourmaline). Dravite is usually black to brown, may be colorless. Uvite is black, brown, and green, usually dark colors. Schorl tends to be black, blue, or blue-green. Buergerite is always dark brown to black, with a bronze-colored iridescence or Schiller under the crystal surface. The gem tourmaline, elhaite, occurs in a huge range of colors and shades.

Liddicoatite is a relatively newly described species that was for years considered to be elbaite (from Madagascar) but when investigated turned out to be a calcium analogy of elbaite. Chromdravize, as might be expected, is an intense dark green color from the USSR. Gemmy, bright yellow manganiferous elbaite, close to tsilaisite in composition, has been found in Zambia.

Certain color varieties of tourmaline have widely used names. Achroite is colorless tourmaline; rubellite refers to pink and red shades, and blue tourmaline is generally referred to as indicolite.

The absorption of the 0-ray in tourmaline is strong enough to plane-polarize light. Sometimes this ray is totally absorbed and a tourmaline may appear to be isotropic because it shows only one absorption edge on the refractometer. Pleochroism is especially strong in dark green and brown tourmalines. Pale colors have weak dichroism. Light traveling along the length of a prismatic crystal always shows a deeper color than at right angles to this direction.

There are many other tourmaline localities, but the above are the major gem-producing ones.

Tourmalines weighing hundreds of carats have been cut out of material from various localities. Brazil and Mozambique produce some of the largest stones, but Maine and California crystals of very large size have been discovered. Most larger museums have fine tourmaline collections and display very large gems.

A representative collection of tourmaline colors would have to encompass well over 100 stones.

Thinking about a tourmaline engagement ring? Learn everything you need to know to buy your perfect gem, from hardness and durability to color connoisseurship.…

Tourmalines are a large mineral group with a variety of chemical compositions. Learn how tourmalines form and why so many colors can appear in one… 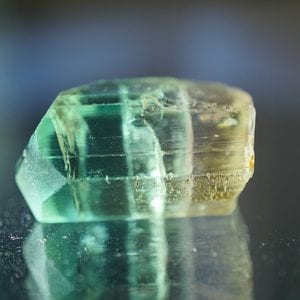 Gem stress can cause stones to break during faceting. Learn what techniques may reduce the odds of fracturing and how to spot problem rough before… 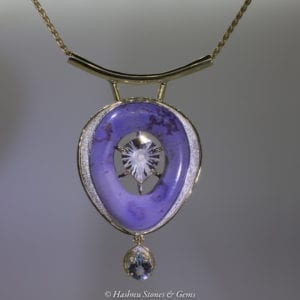 Combining stones can be more than adding diamond accents to colored gemstone jewelry. Explore colored stone combos and learn how to set gems within… 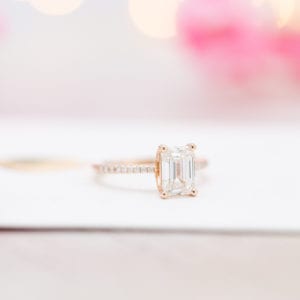 Although most manufacturers disclose their synthetic diamonds, some resellers don’t. Learn how to identify these lab-created diamonds.…

Looking for a fun summertime gem? Watermelon tourmaline adds a pop of color that’s perfect for a playful summer look. Learn about the quality factors…

What’s the difference between a reflectometer and a refractometer? If you’re interested in studying or buying gems, learn the facts here.…