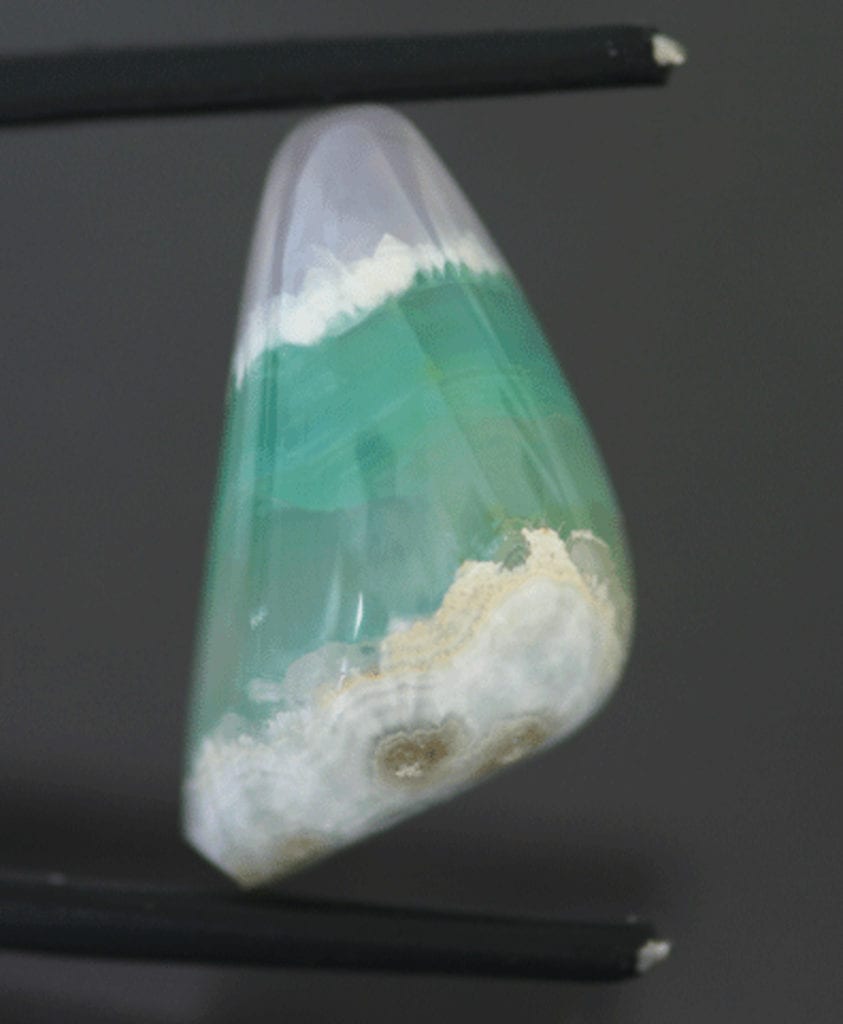 Smithsonite occurs across the globe, but facetable crystals are extremely rare. These gems can show a wide range range of rich colors but are too soft for most jewelry use. However, high dispersion makes properly faceted smithsonites truly magnificent collector’s pieces. 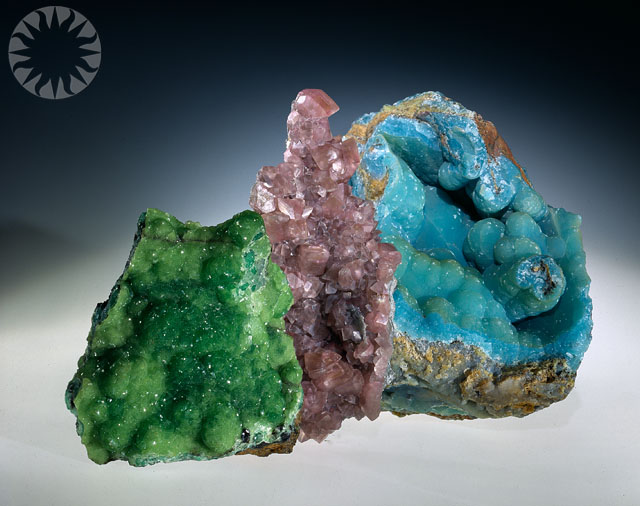 In addition to identifying smithsonite as a distinct mineral in 1802 and other scientific accomplishments, James Smithson was the founding donor and namesake of the Smithsonian Institution. Three specimens of smithsonite, center specimen from Greece, the other two from Namibia, from the collection of the Smithsonian Institution. Photo credit: Laurie Minor-Penland. Public.Resource.Org. Licensed under CC By 2.0.

Smithsonite belongs to the calcite mineral group. It also forms a series as the zinc-dominant (Zn) end member with iron-dominant (Fe) siderite.

For many years, collectors have prized blue-green smithsonites from New Mexico and yellowish stones from Tsumeb, Namibia. However, varieties in many stunning colors exist, including deep yellows, apple greens, pinks, and purples. 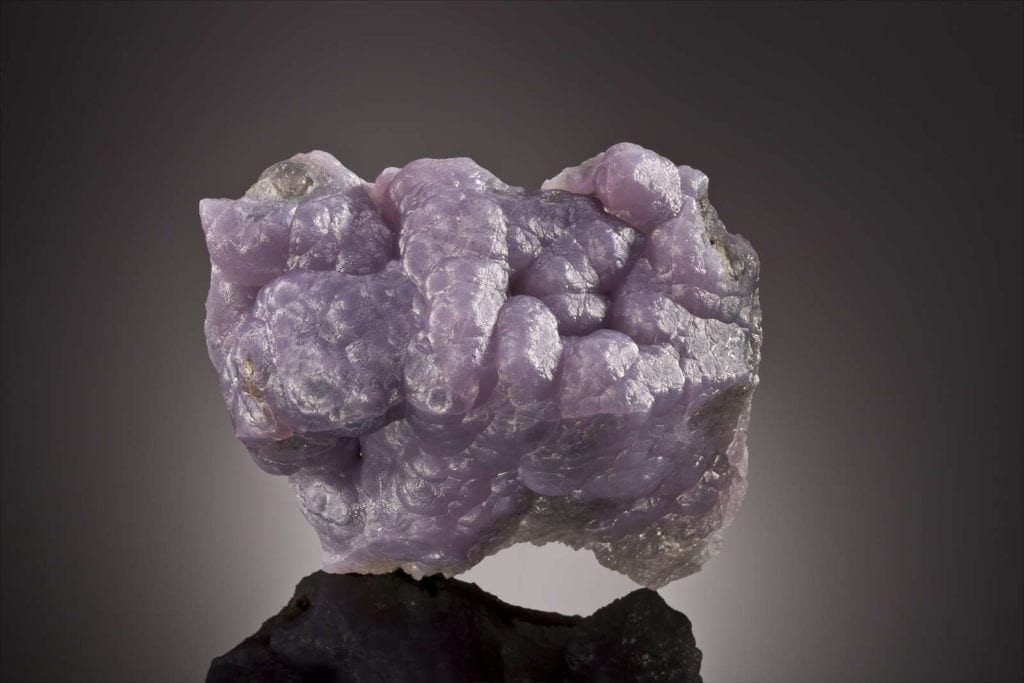 Regardless of the causes, the colors of faceted smithsonites benefit greatly from this gem’s considerable dispersion or “fire.” Unfortunately, relatively low hardness and perfect cleavage leave these gems vulnerable to damage from everyday wear as jewelry stones. Reserve these gems for occasional wear or pieces with protective settings. For instance, pendants and earrings would make excellent jewelry choices.

However, smithsonite’s cleavage can also make it a difficult material to cut. Thus, few faceted stones are available for jewelry. You’re more likely to find smithsonites in a mineral collection than a jewelry collection. 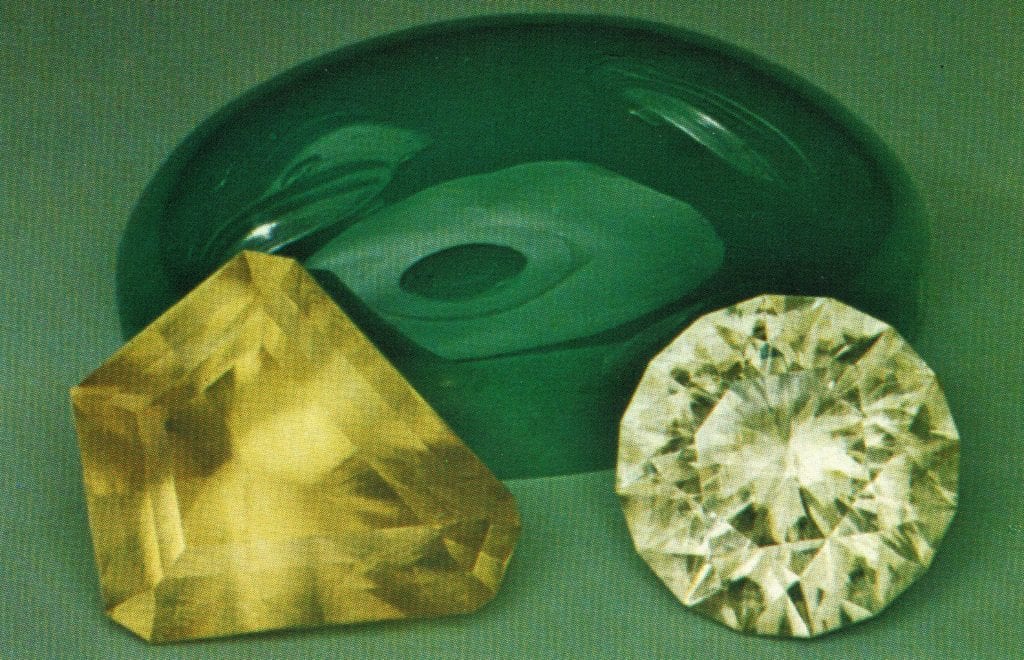 Smithsonite effervesces in warm acids. Please keep in mind that acid testing is a destructive test. It can endanger both the gem and the tester. Never conduct this test on a finished gem. Use this procedure on rough as a last resort for gem identification only.

Faceted smithsonites may show a doubling of back facets when viewed through the table due to high birefringence. However, such stones must have considerably greater transparency than typical.

Cabbed smithsonites will show a “birefringence blink” when examined through a refractometer. 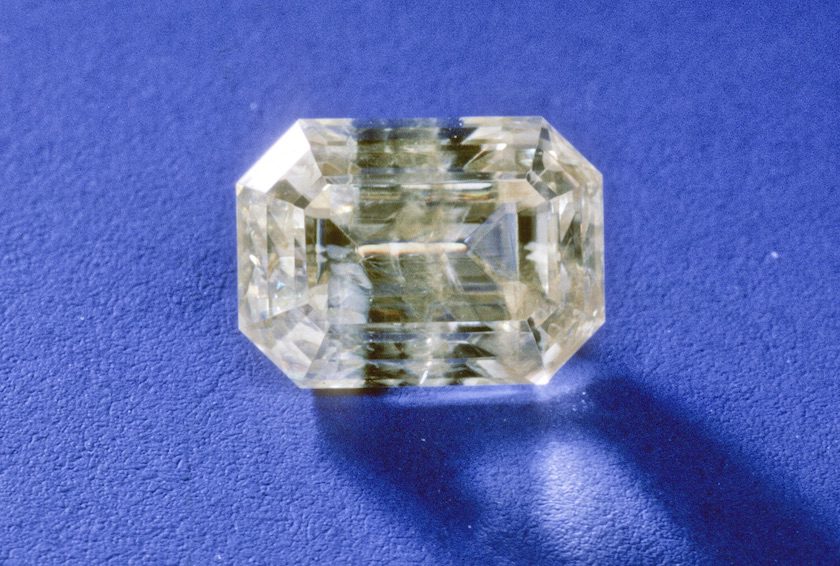 Are There Synthetic Smithsonites?

Geologists have synthesized smithsonite (a zinc ore) for research purposes.

Evidently, “synthetic smithsonite” does occasionally appear in jewelry. However, an online search for such pieces doesn’t clarify whether this material is actually lab-created or just a simulant or “imitation.” These may be instances of the term “synthetic” used in the more popular sense of just simply “not real.”

Smithsonites are somewhat porous. Thus, some pieces may receive oil treatments to enhance their luster or surface coatings to prevent discoloration.

Where is Smithsonite Found? 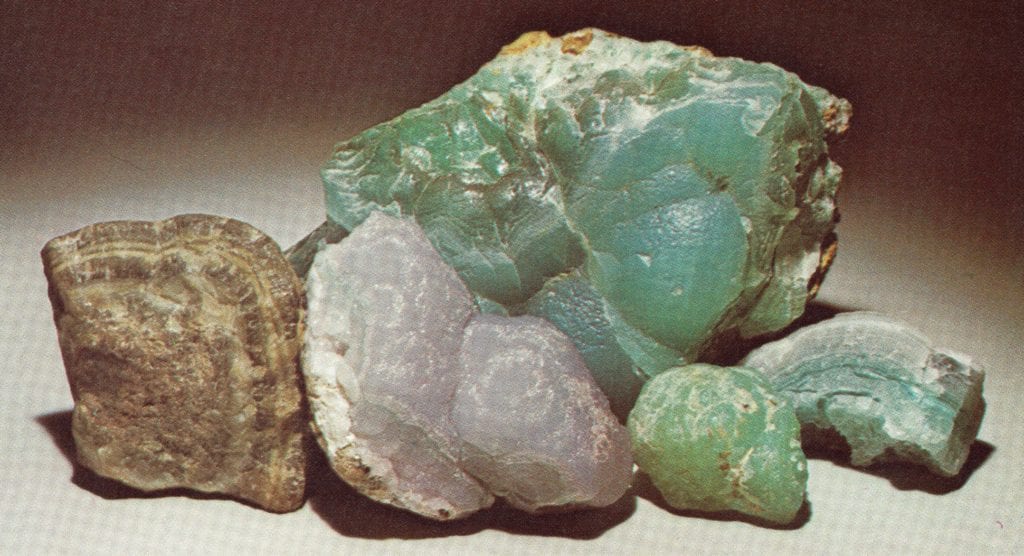 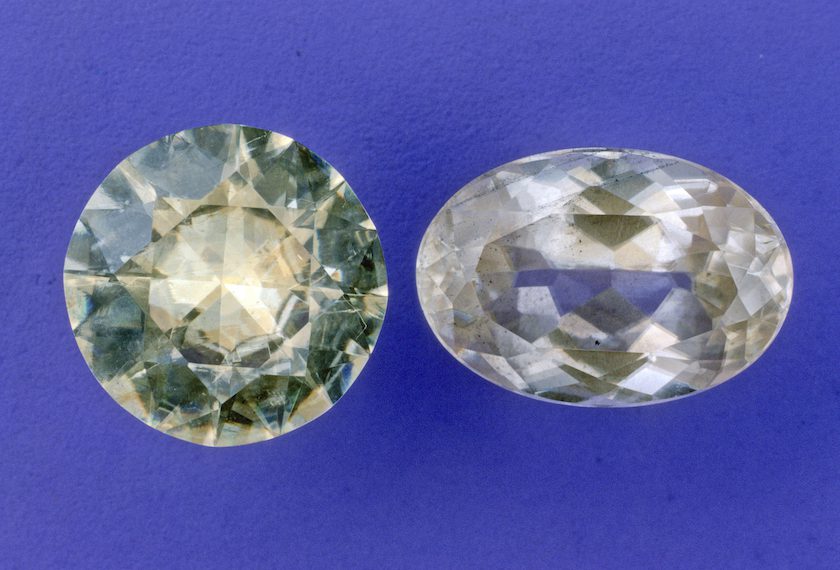 Mexico produces material with much variation in color, including bi-colors, as well as pink and bluish crusts. The pink material from Mexico is especially lovely.

The Masua and Monteponi mines in Sardinia, Italy once produced translucent, deep yellow, banded material. However, these mines are now closed. 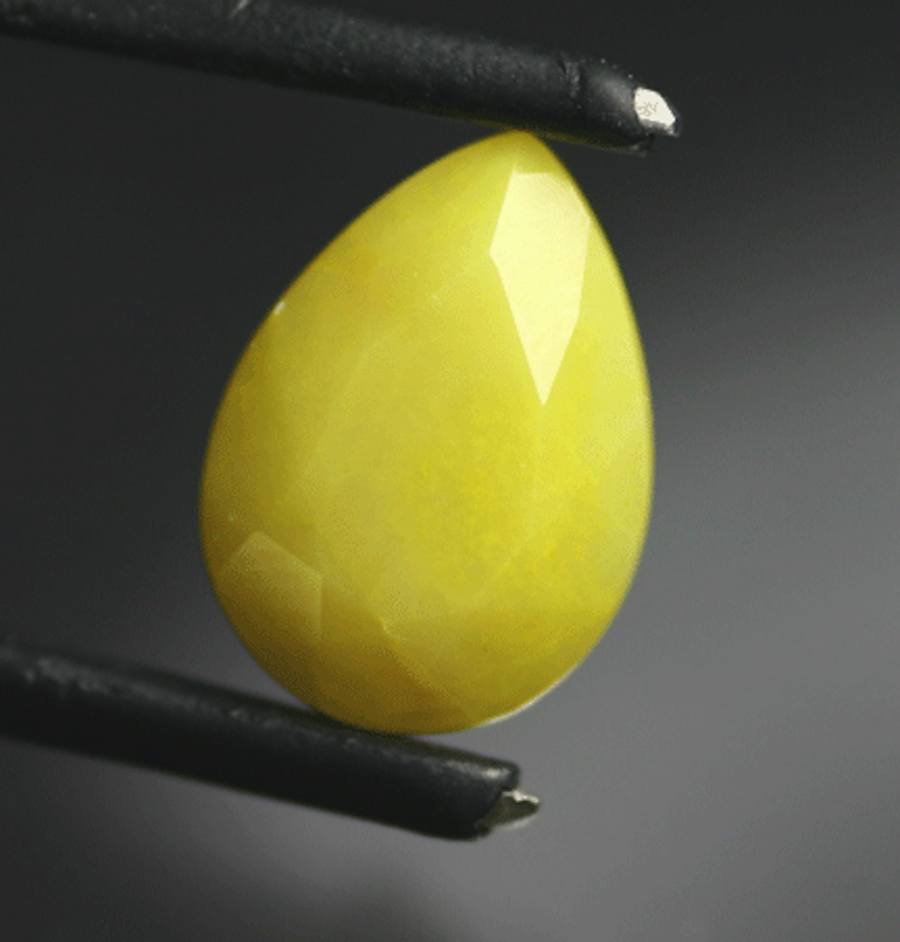 Under strong transmitted light, you could see the banding in this 6.17-ct yellow smithsonite. Pear mixed cut, 13.3 x 9.5 mm, Monteponi Mine, Iglesias, Sardinia. © The Gem Trader. Used with permission.

Lapidaries can cut beautiful cabochons up to many inches from massive material from New Mexico, Sardinia, and other localities. Crusts in some localities are several inches thick. Facetable crystals are rare, and stones over 10 carats could be considered exceptional.

How to Care for Smithsonites

Since smithsonites are somewhat porous, don’t wear them while applying perfumes or other sprays. Avoid wearing them directly against your skin. Clean these gems only with a soft brush, mild detergent, and warm water, but don’t soak them. See our jewelry cleaning guide for more recommendations. 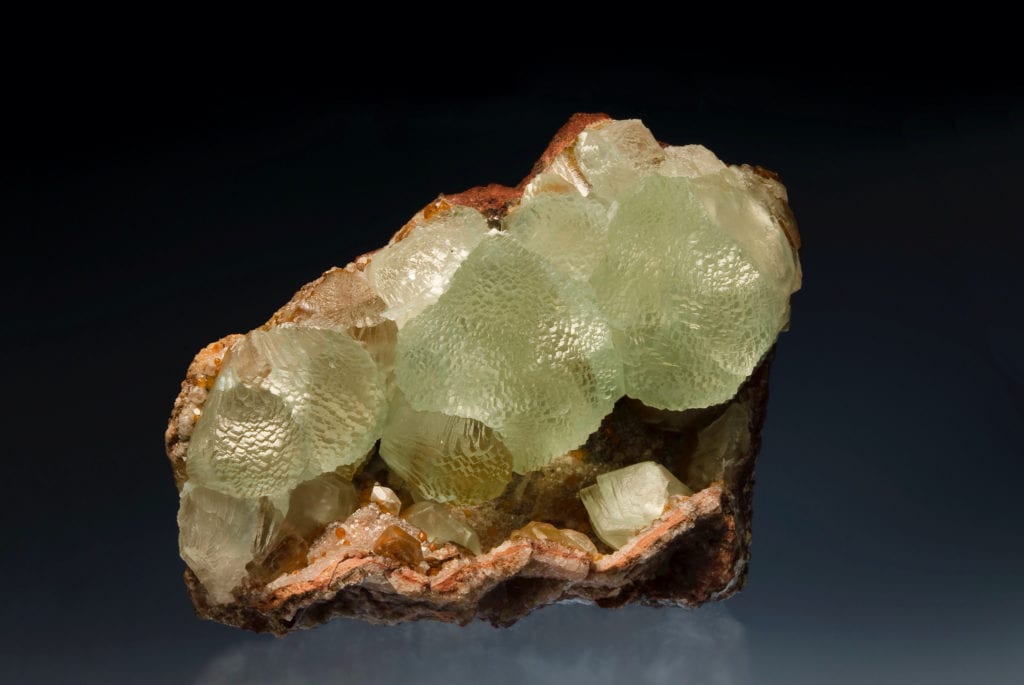 Some gems are seldom faceted because they’re rarely found in nature or rarely used for jewelry. Learn a few tricks for faceting seven exotic gemstones.…