Left: A picture of the TEP ball park gemshow.

Another Tucson Gem Show has come and gone. Basically this year it was rain, rain, and then some more rain, not too heavy, just all during the show it seemed like. There were quite a few changes and new shows open this year (as usual) and it looks like there will more changes and shows next year, again 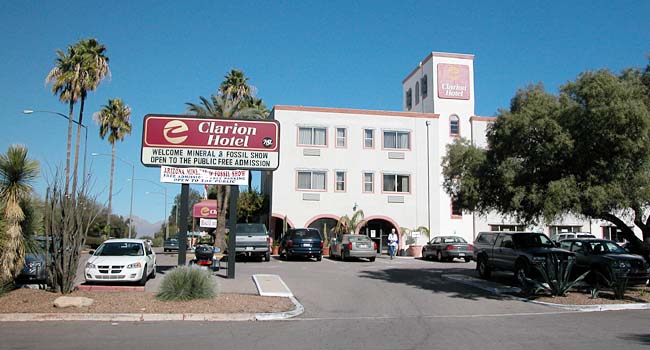 Left: A picture of the Clarion hotel, this is the same mineral show that used to be at the Best Western Executive Inn on Drachmann. The hotels and promoters are all moving around. The Clarion is located on Alvernon just north of Broadway and is a nice place to have a mineral show with the exception that there is very limited parking (gee, that is some thing new…).

Left: A picture of the GJX show.

Note: the second tent to the right in the picture. It is a new tent that expands the GJX show. A lot of the dealers that were in the smaller new tent were people from the GLDA show that used to be in the Holiday Inn hotel down town.

The promoters are playing musical shows and moving everything. There was no show at the Holiday Inn downtown this year and the GLDA moved 7 miles west to Star Pass for their show (terrible location in my opinion). I have been told by several of the dealers, former GLDA dealers (in the GJX tent) that the GJX will expand again next year and also have their show in the Holiday Inn where the GLDA formerly was. A short walk from the GJX tents in the picture.

Left: A picture looking north down the I-10 freeway ramp.

There are several shows down that way, including Days Inn, which you can see. You can see people walking along looking at the various shows.

What you really want to know is about faceting rough. Well here you go. Here is what I saw or did not see as the case may be. Not good news in general.

Quartz
Amethyst and Citrine – were available in about the same quantity and quality as the last few years. That is to say it was available, not too hard to find and up in price about 10-20% depending on what you wanted. All other Quartz was the same way basically.
Ametrine – Supply is zero, none, nada, zip… I met and talked briefly to the son of the mine owner. He told me that they are restricting the rough and only allowing it to be bought/sold and cut by quality faceters. They want to eliminate the low end people/manufacturers (read India in particular, China) from the rough completely. I am not sure how that applies to the American hobby market.

Beryl
Aquamarine – there was not much available in good quality color from Africa. Mozambique and Zambian materials were in very short supply. There basically is no rough available coming out from the mines right now.
Aquamarine – from Afghanistan and Pakistan was available, but not in large quantity and the majority of this material is light to pale in saturation (crystal shaped). Not much in large sizes and most of the large stones were dirty, but a fair amount in pinkie finger sized crystals, light color to pale.
Aquamarine – in small sizes 3-6 carats from Brazil in light saturation was around, if you were willing to work hard to find clean pieces in the piles of material.
Morganite and Emerald – was not available in faceting quality.
Goshenite – was around, but mostly small and not especially clean, an occasional large piece.
Helidore – was not really available.

Garnet
Pyrope – Garnets were about normal, around and not expensive but dark and small.
Spessertite – Mandarin orange was around but extremely few pieces are clean enough to facet. I did see some nice clean large pieces but the prices were very high. I passed…
Grossular – Garnets were very scarce and the price was VERY high. Nothing clean to speak of in mint (it is almost gone and they are asking Tsavorite prices), Tsavorite was available cut, no rough as usual.
Mali – Garnets were not available rough and cut prices are through the roof in price and not available.
Rhodolite – was available, but nothing like the quantity that used to be around and getting more expensive. At least in the short run. Still some decent rough around. 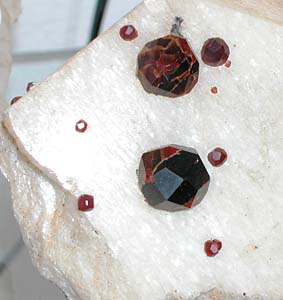 Topaz
Blue(s) – Not available, sort of. OK, interesting story… India Indians and Chinese bought out the entire supply of blue Topaz before anybody else could get some. I at first found this surprising, but on later thought realized that this should have been expected.

I will explain. The larger cutting houses and manufacturers of low end cut stones are typically the Indian and Chinese. We all know that there has been a major shortage of rough on the market, in particular Tourmaline. So naturally the prices on all quality rough has gone up. I personally fully expected the low end cutting houses to look for some thing else to cut and figured it would be Amethyst and Citrine. Well I was basically right they would buy other rough they could manufacturer with, but I was wrong about it being quality Amethyst and Citrine. It turned out to be blue Topaz…

Why? Well this is my personal opinion and observation, other people may disagree with me. But, the low end people/cutting houses are not buying quality Amethyst and Citrine because they have been cutting man-made Quartz for a long time (and using the “Don’t ask, don’t tell…” method to sell it for years). Read my articles or just look at any show and you will see piles of perfect (man-made) Citrine and Amethyst at almost all of these peoples tables.

Is all of that Citrine and Amethyst real?

So, they obviously have been selling man-made Amethyst and Citrine for years. Ask yourself what color do they need and they cannot fake? Right blue Topaz… Hence the run on blues. But never fear, blue Topaz is man-made and they are making a lot more as I write, so there will be no shortage anytime soon. However, there will be some price increases due to the high demand… So expect them.
Colorless Topaz – available, but the price of clear is going up, particularly in 6g and over because of the run on treated blue Topaz from the low end cutting houses.
Pink Topaz – There was nice color small (nothing clean over a gram and not much clean anyway) pink from Pakistan. Very expensive.
Imperial – None available rough. I have been told the mine is basically not producing, I do not know…
Tan to peach/pink – A fair amount of Pakistan material. But most of it is not color stable and not much was clean enough to bother with.

Chrysoberyl – I did not see a single piece. None.

Peridot – There was a some rough available but most of it was not clean. I did see some clean parcels but they were expensive and not something that the average faceter could afford. Cut Peridot in larger sizes has hit the big time price wise, it is expensive.

Sapphire – None available rough. Generally the usual amount in native cuts were available. I call them pre-forms.

Spinels – None available rough. Generally the not much available cut either…

Sunstone – Available in about the same quantity and quality as the last few years. Probably slightly up in price depending on what you wanted.

Opal – Available in about the same quantity and quality as the last few years in small sizes. That is to say it was available, but higher quality/large material was not really around rough.

Zircon
Blue – There was not much, a little cut, but not a lot of any size.
All other Types – There was basically not much, most of the Tanzania areas are no longer producing material. Look for fancy Zircons to go up in price.

In general rough is on a down cycle and because of poor supply the rough that is available is getting more expensive. These cycles are fairly common in the supply of gemstones and hopefully this down cycle will not last long. Not every thing is negative, there was rough, some of it pretty nice. However if the rough is a highly commercial type and in short supply like Tourmaline. There was and is going to be significant price increases.

The good news is that there is good quality Amethyst, Citrine, Sunstone, Garnets (not green), and some other rough still readily available and reasonably priced. Supply comes and goes, this is a cycle and there will be rough available. Believe me the miners are all looking and exploring new areas, I am seeing some very promising rough beginning to come out. Most of it at this point is not in large production. But.

Below are some more pictures of the mineral shows. 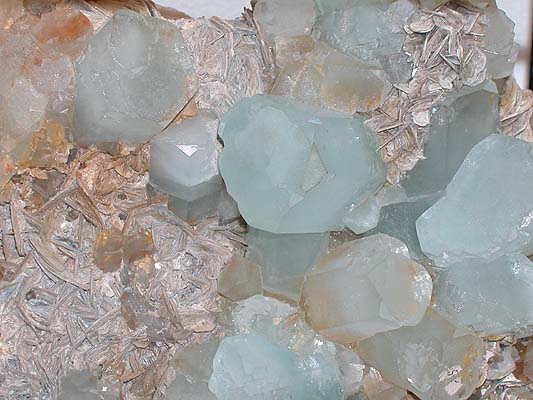 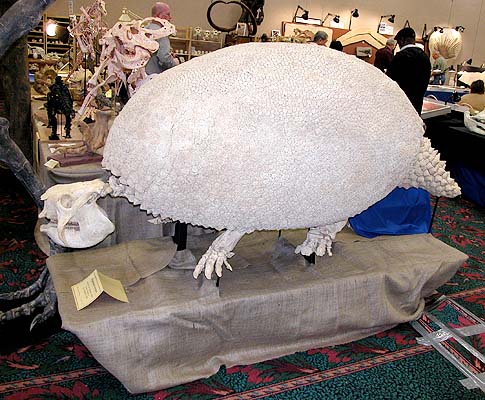 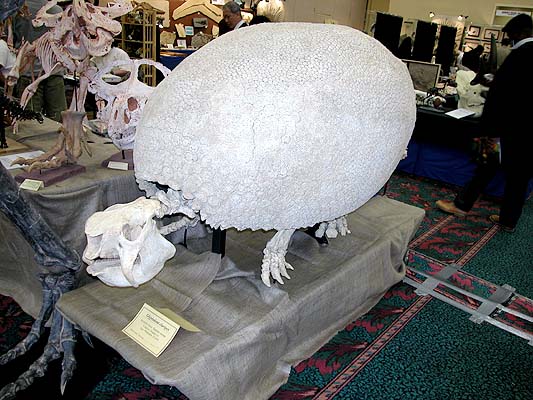 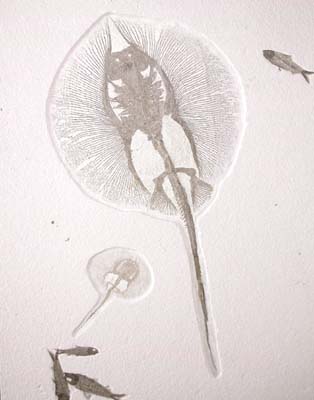 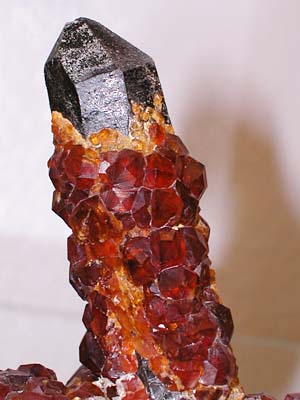 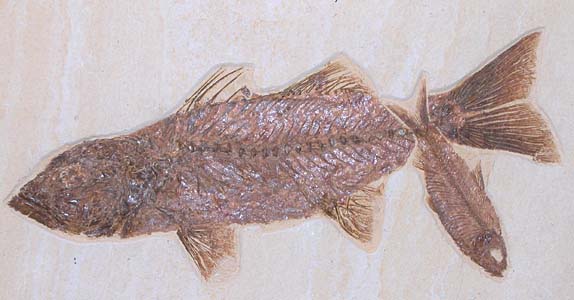 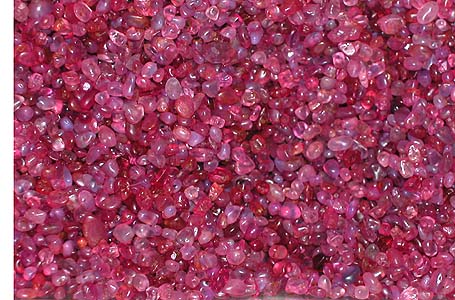