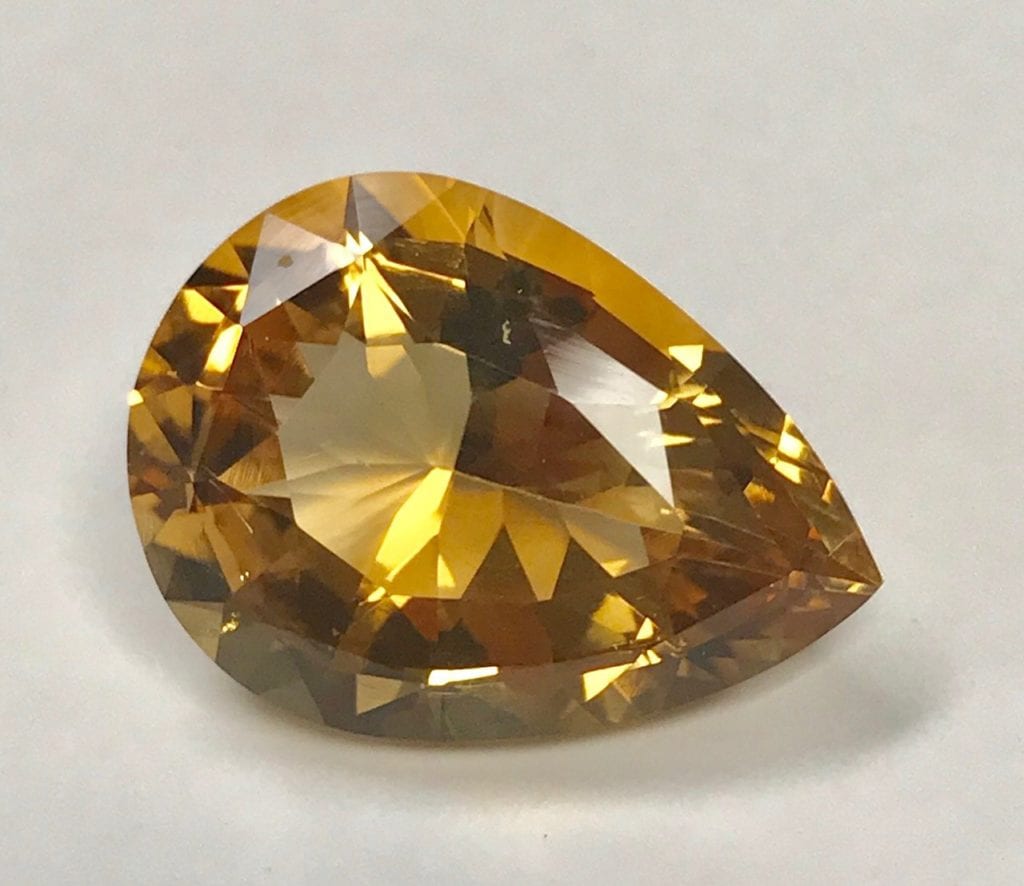 Citrine is the yellow to red-orange variety of crystalline quartz. Clever marketing and the rise of “earth tone” fashions have made this durable and readily available gem a popular jewelry stone in recent years. 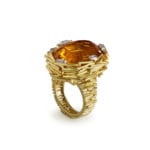 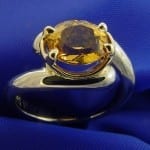 Why are Topaz and Citrine Gemstones Misidentified?
View Citrine Profile

In terms of color, at the top end of the scale, you’ll find prime specimens of the most saturated yellow, orange, and reddish tones. 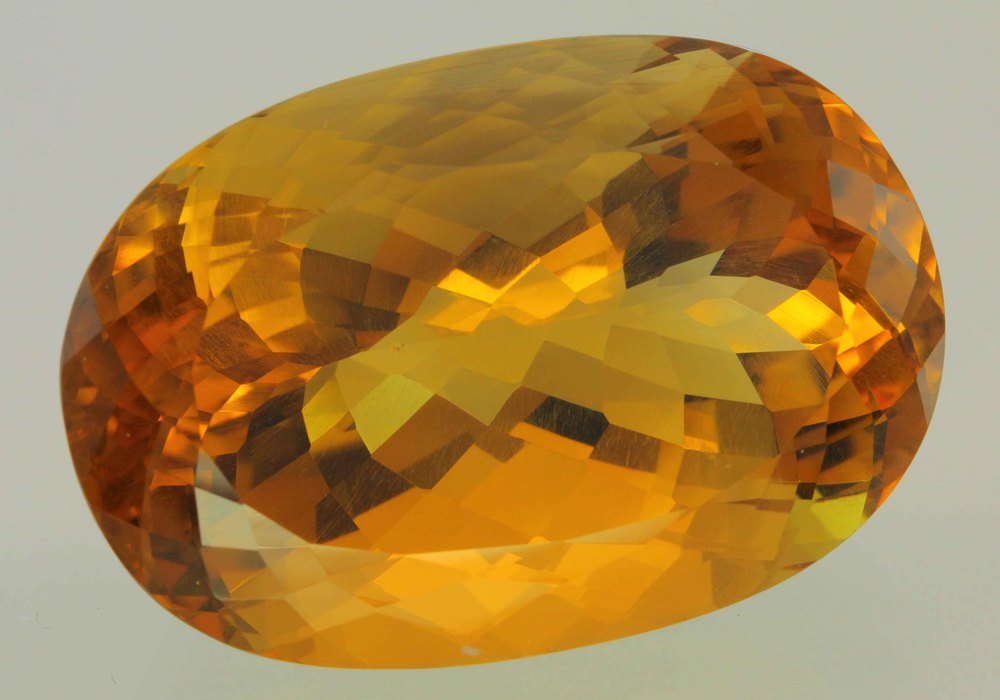 Those with less intense color fall into lower value ranges, with pale or smoky stones at the bottom. 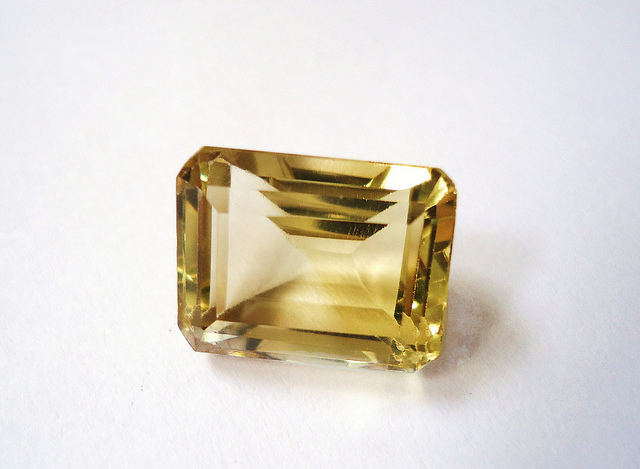 Citrine. Photo by Mauro Cateb. Licensed under CC By 2.0.

There’s no exponential increase in value per carat with increase in size, as larger sizes are readily available. Inclusions will decrease value.

As with any gem material, custom cutting increases value. In many fancy cut or carved specimens, most of the value is due to the artistry of the cutting. 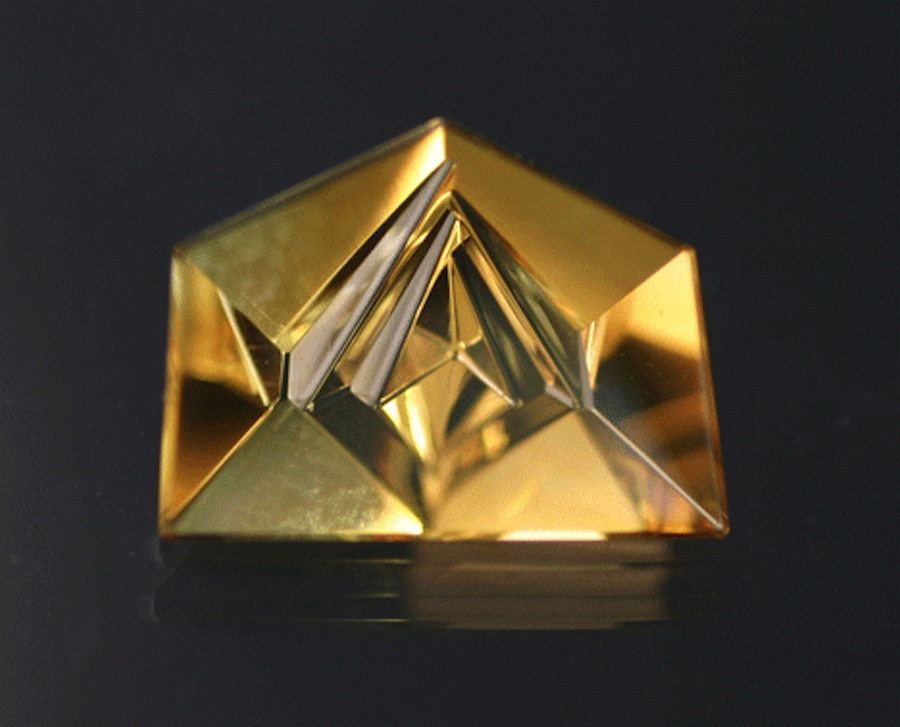 Citrine was once the Rodney Dangerfield of the gem world. Due to its abundance, it would “get no respect,” as it were. In recent decades, this perception has changed, partly because earth-tone jewelry has come into vogue. Home shopping networks have also marketed the various shades of citrine aggressively, with catchy adjectives like “butterscotch” and “whiskey.” Apparently, this has worked. Citrine is now a modern alternative birthstone for November. 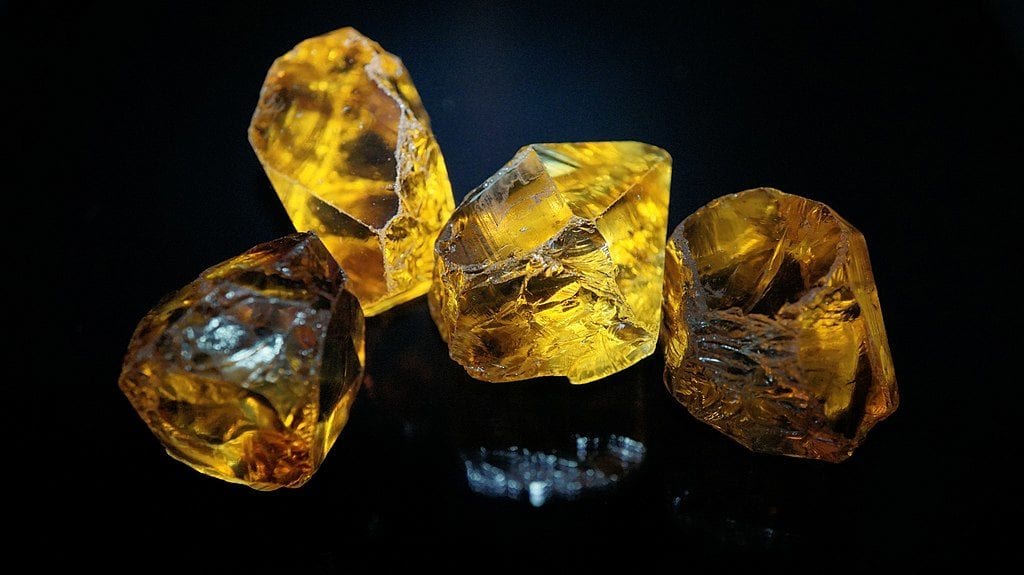 Citrines range from light, lemon yellow to “Madeira,” a rich, orange color with red flashes. This accepted description refers strictly to color, not a locality.

Citrine as a Jewelry Stone

Citrines make fine jewelry stones. With no cleavage and a hardness of 7, they can be used for any jewelry application. Like most quartz, it’s available in large sizes. Thus, custom gem cutters can easily use this stone for dramatic and intricate cuts. 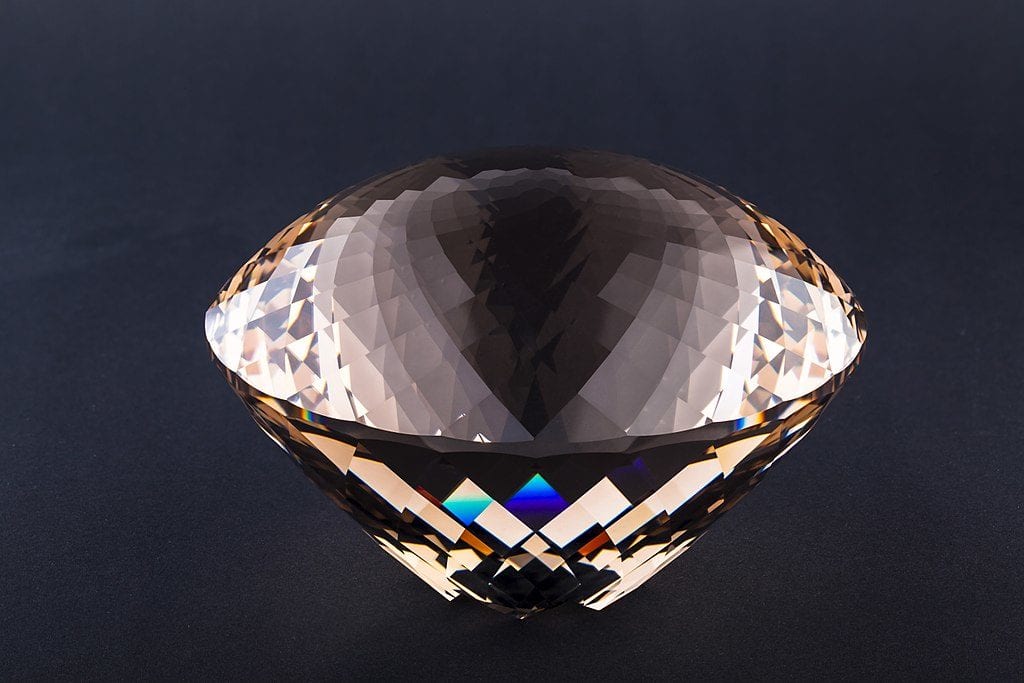 I saw a wonderful gemstone design online that caught my interest. With a little research, I discovered it was featured in an article in Lapidary Journal, July 1972, by Wm. J. Maloney. He named the cut The Beatress. Originally, he sawed a sphere into quarters, dopped it, and faceted the pavilion. We used the GemCad program to redesign the gemstone for 2017. Here is our rendition of this beautiful design. 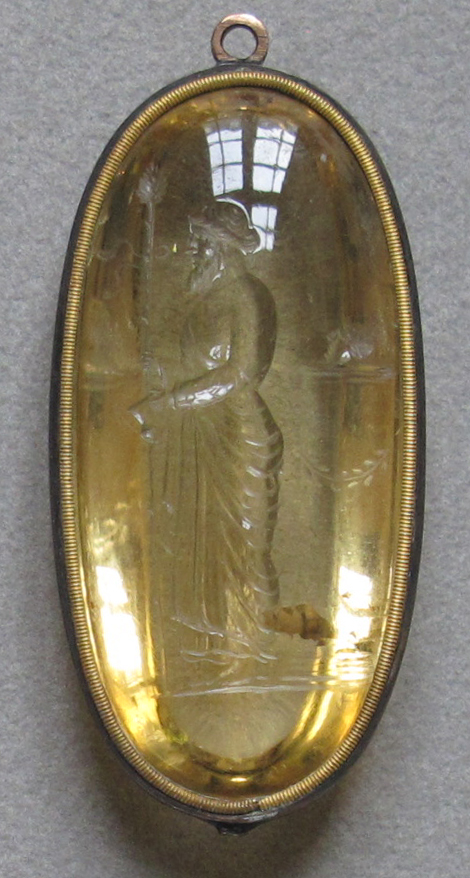 Citrine’s yellow colors are due to the presence of ferric iron, colors traditionally associated with topaz. Confusion between these gemstones does occur, even though quartz and topaz are distinct gem species. 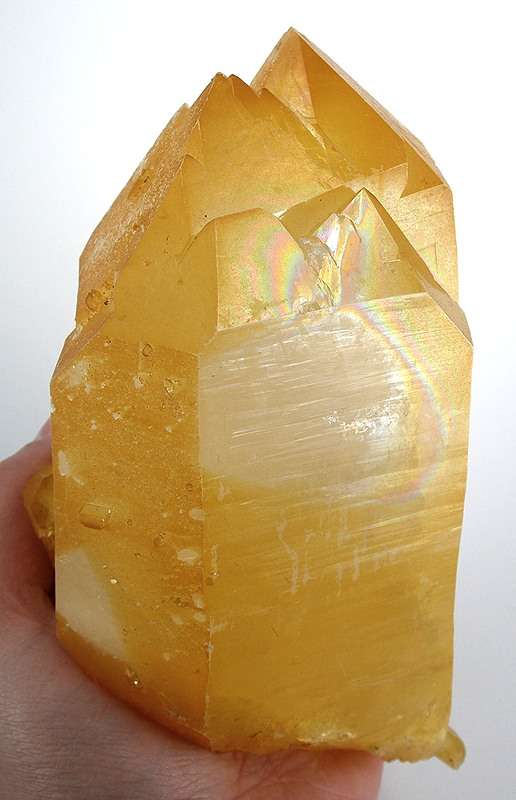 Although encountered much more rarely than citrine, scapolite can easily be misidentified as citrine. You can learn how to distinguish them here.

Citrines can be grown hydrothermally in labs. Although natural quartz is common and inexpensive, synthetic quartz can be manufactured in sufficient quantities and at low cost. This makes the practice economically viable.

Turning natural smoky quartz and amethyst to citrine via heat treatment usually occurs right at the mine. However, this stable treatment is fully accepted within the gem trade. Colorless quartz stones are also irradiated and heated to produce “lemon quartz,” stones with a neon, slightly greenish yellow color.

Heat treating citrines with the proper iron content creates the prized “Madeira” color. However, no simple way of testing the iron content of citrine exists. Therefore, processors must monitor this treatment carefully. 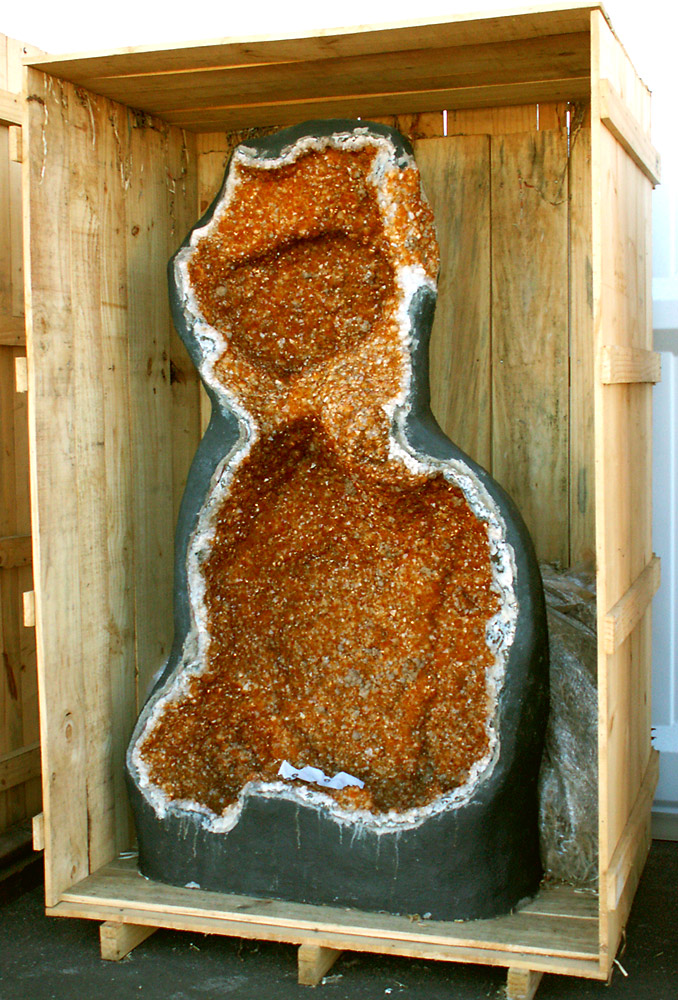 This citrine vug fills a crate about 9′ tall. Photo by cobalt123. Licensed under CC By-SA 2.0.

In the past, people commonly referred to citrine by misleading names, such as “Brazilian topaz,” “Madeira topaz,” and even “topaz quartz.” Unscrupulous vendors can still take advantage of the long association of yellow with topaz to pass off inexpensive citrines as more expensive topaz pieces. For more examples, consult our list of misleading or false gemstone names.

Citrines make durable jewelry stones that require little special care. However, heat-treated stones may fade when exposed to heat. Thus, avoid steam cleaning or boiling your citrine jewelry. Instead, use either ultrasonic cleaning or simply warm water, mild detergent, and a soft brush.

Although usually free of inclusions, citrines with low clarity grades — with liquids, gases, or crystals trapped within them — should be cleaned by hand only. However, any heat-treated citrines are most likely safe to clean in an ultrasonic cleaner. 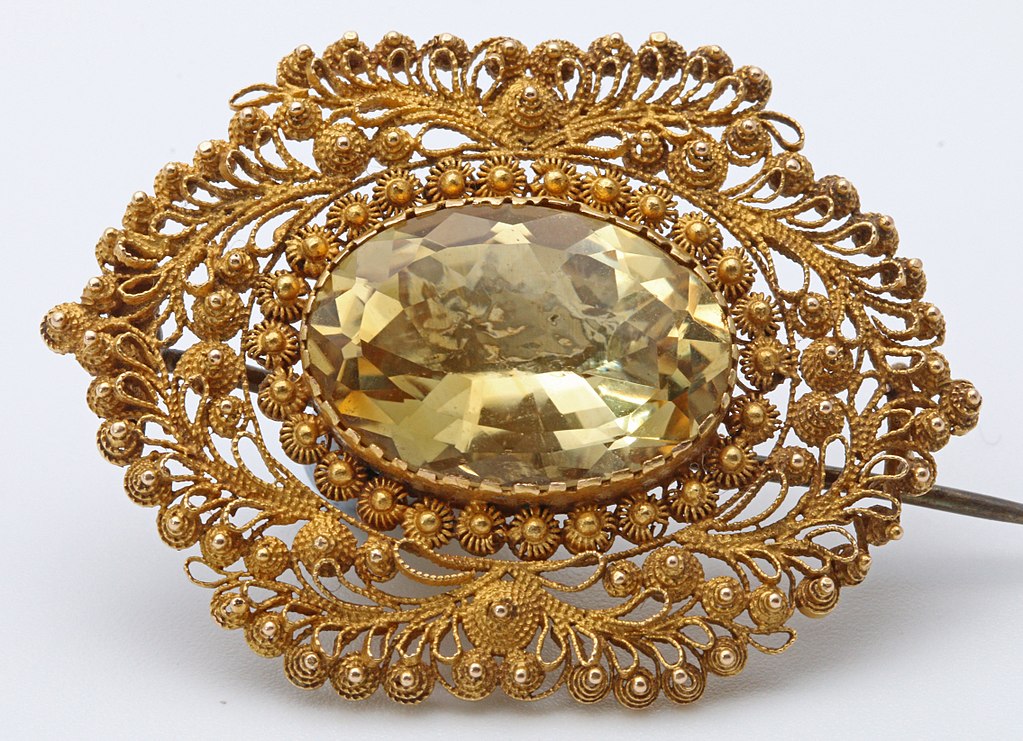 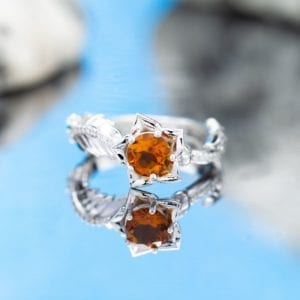 Sunny and bright, citrines symbolize health and happiness. Our citrine engagement ring guide will show you how to pick the perfect gem for your… 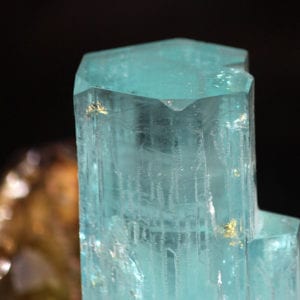 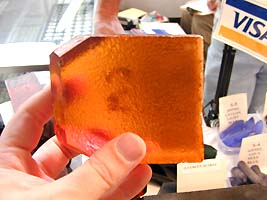 How to Identify Synthetic Rough in Gemstone Parcels

Telling synthetic rough from natural stones in a gem parcel can be challenging. These tips can help you find some telltale signs of lab-created… 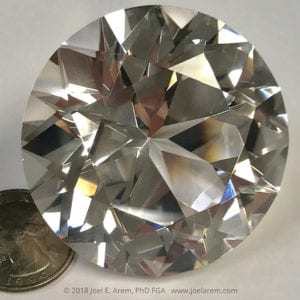 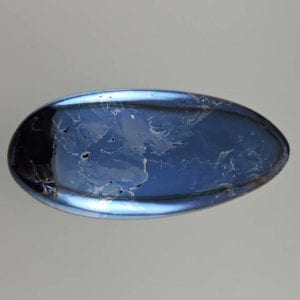 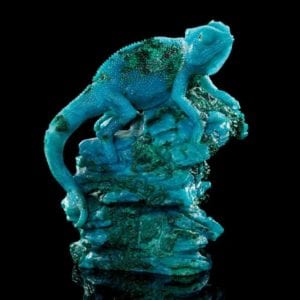 Gem carvings are judged on material, workmanship, and artistry. Learn how to apply these criteria to a piece with our step-by-step guide. 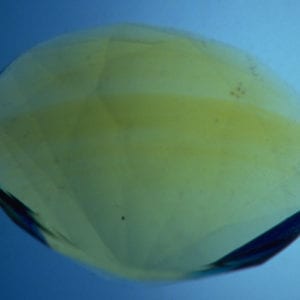 Is Demantoid the rarest garnet?

Is this agate? Scottish agate perhaps?