Questions About Lapidary and Jewelry Making

Answer: You sit and stare at the stone for a long time. The more expensive it is, the longer you stare. Seriously, orienting gem rough is an area where faceters have to build up skill and experience over the years. The decision is usually a tradeoff between many factors.

While you’re staring at that stone, consider the following:

I try to see what sort of shape is suggested by the rough. Try to identify where the table might be and see how much depth is available. Visualize the different positions for the table plane and stone axis. Try to imagine what size and shape you could fit into the piece. Narrow the possibilities to a few options.

Making a decision about table placement is critical. Most things follow from there.

My preference is to go for maximum recovery in expensive rough, even if it means the stone has a few tiny flaws. Cutting flawless stones can be expensive. You may end up with a lot of small stones. For general jewelry wear, a few small flaws won’t affect the appearance of the piece. Of course, if the material is cheap, you can afford to be more critical. That’s one reason why it’s a good idea for beginners to start with relatively non-directional things like quartz, synthetic sapphire, and garnet.

I’ve recently cut tourmaline, iolite, and topaz. Understanding the reasoning behind my gemstone orientation choices might be helpful for a beginner. 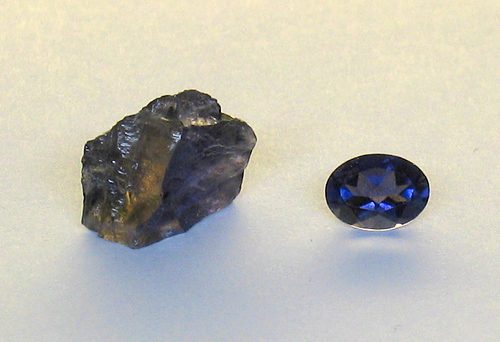 I received a batch of orange-pink tourmaline with well-developed crystals that were virtually emerald-cut preforms. The orientation was obvious, but I kept in mind the well-known fact that most tourmaline has a deeper color looking down the C-axis (the long axis). However, cutting with the table across this axis would have meant slicing into a large number of small triangular stones. That was a silly idea.

In practice, the obvious cut worked well. The internal reflection picked up the C-axis color, and the stone had a good shade when finished. (In green tourmaline, it’s almost obligatory to cut with the stone axis perpendicular to the C-axis. The color viewed down the crystal can be so intense as to be opaque).

A few small flaws appeared near one end of the orange-pink stone as I started to rough it out. I was undecided on how much to shorten the crystal. Eventually, I decided to leave them in, since they would be below the end facets and not visible through the table. Of course, if I had decided that they were objectionable in the final stone, I could have recut it smaller. 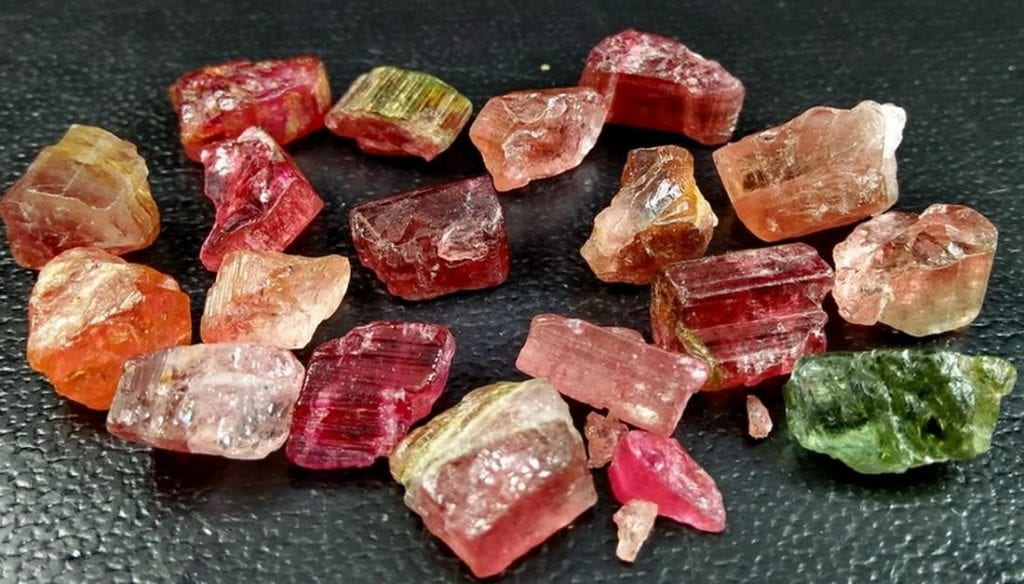 This pleochroic material commonly has only one axis with a strong purple. The others are pale purple or yellow/brown. However, the cleavage is such that it often comes in thinnish pieces with the dark color on edge. Again, I didn’t try to cut it for the depth of color. I cut across the axis. Again, the internal reflection picked up the color. The result was a much larger stone with a steely, mid-lilac color. In my opinion, this was far more attractive than the dark conventional cut which attempts to emulate sapphire.

This material also had flaws. Many of the stones in my batch had veils that would pick up the light only at certain angles. I ignored all but the worst of these. As I suspected, they were invisible to the eye in the final stone. (Although a loupe reveals them clearly). 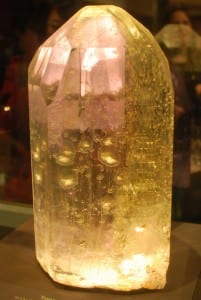 Topaz crystal. Photo by Karen Neoh. Licensed under CC By 2.0.

I had irradiated material with a patchy brown color that was good down the axis but poor across. Since I had to watch out for the cleavage plane, there was only one choice. I had to tilt the table to the cleavage plane by 5º or so. The final color was much warmer and more uniform than the rough suggested.

For all three stones, cutting at the correct angles allowed light to be reflected within the stone at many angles, thus mixing up the color. This way, color problems in the rough are often not apparent in the finished stone.

Additionally, I had the luxury of being able to cut fancy shapes and non-standard sizes from my rough. This made my job easier. If you need a particular size and shape, then you may have to sort through several pieces of rough to find one that will work.

Tourmaline is a name applied to a family of related minerals with widely varying properties. Tourmalines make very popular jewelry stones and…

This stone, which represents one of the few relatively available and affordable blue stone options, is rapidly gaining in popularity. Arguably… 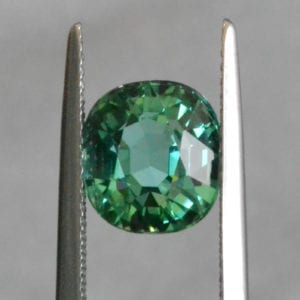 Mint tourmalines, with their pastel shades and great clarity, are becoming more popular. Learn why these gems are well-suited to our challenging…

Topaz requires specific and unusual conditions to form. Learn how topaz develops and how it gets its colors, from yellow and blue to rare and valuable…

Thinking about a tourmaline engagement ring? Learn everything you need to know to buy your perfect gem, from hardness and durability to color connoisseurship.…

Tourmalines are a large mineral group with a variety of chemical compositions. Learn how tourmalines form and why so many colors can appear in one…

You can probably find a topaz engagement ring stone in your favorite color at a reasonable price. Learn what to look for and how to care for your gem.…