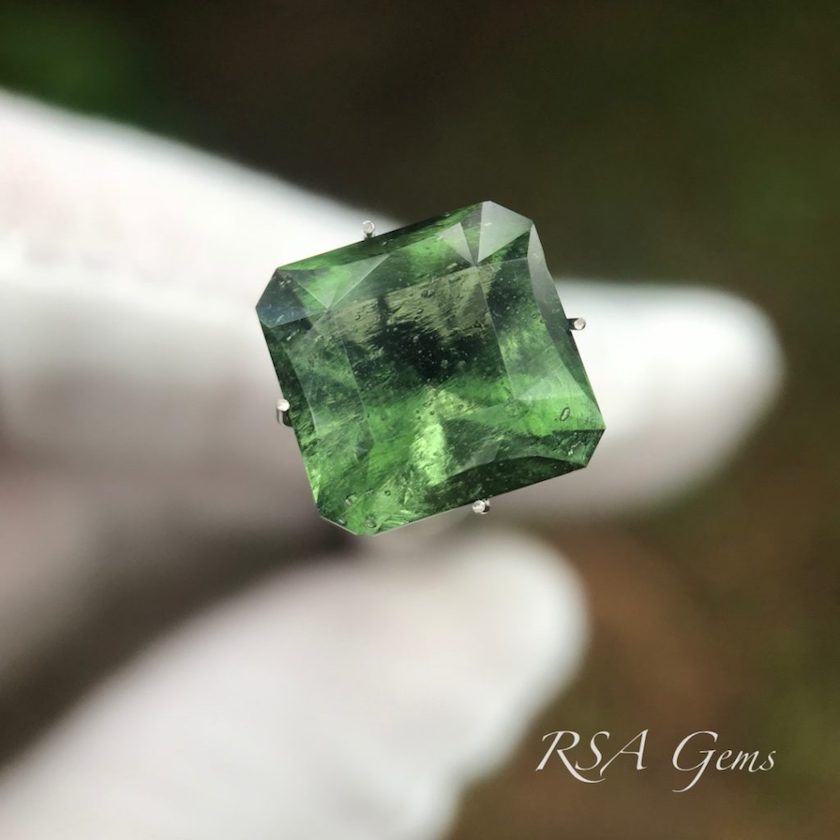 While moldavite is primarily a collectors gem, “New Age” interest in the so-called metaphysical properties of gemstones has boosted its availability and appeal to consumers. Moldavite’s connection to a prehistoric meteorite impact also adds another level of intrigue.

Moldavites are prized as “raw stones” for jewelry or as display pieces. The value of these rough specimens depends greatly on their shape, size, and visual appeal. 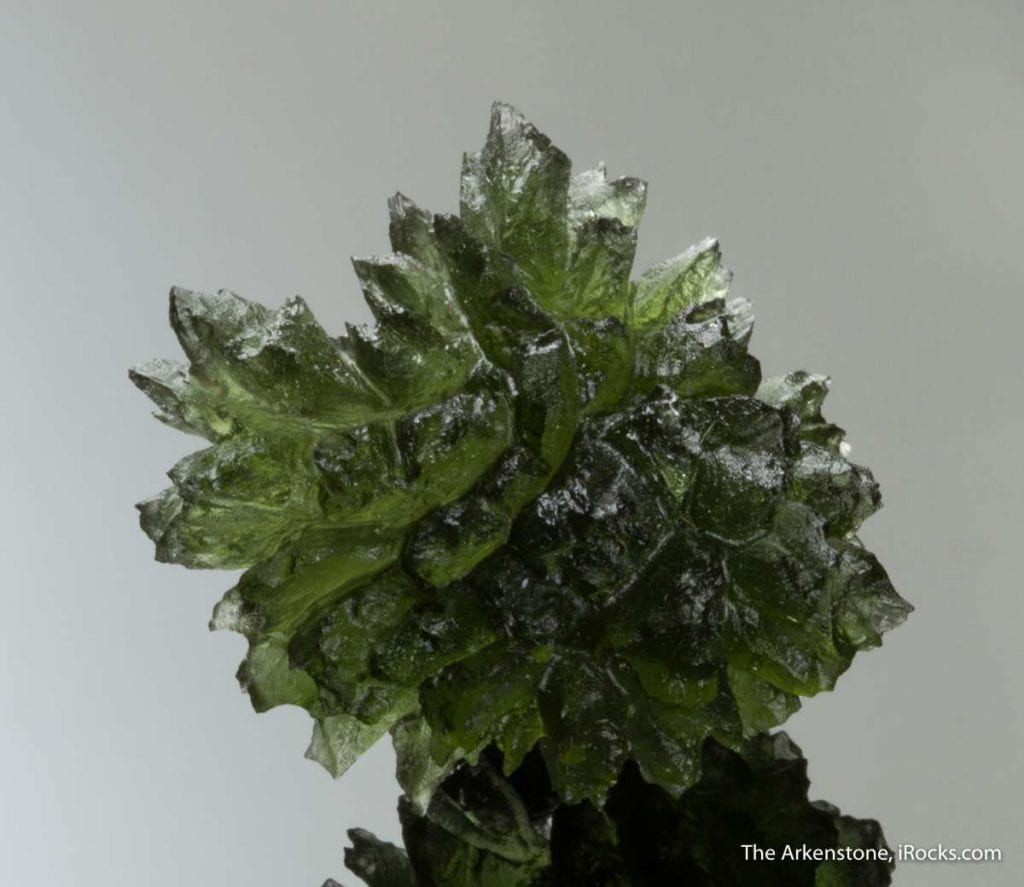 Although this moldavite specimen looks crystalline, it has an amorphous structure, like all glass. Formed from the molten debris of a meteorite impact, it cooled into this shape. The arms radiate from a central point, “like a droplet of water after it hits a solid object.” 3.1 x 2.7 x 2.0 cm, Bohemia, Czech Republic. © Rob Lavinsky, www.iRocks.com. Used with permission.

Lapidaries have also faceted, cabbed, and carved this material as curiosities. Cut quality plays the greatest role in the value of these gems.

Bubble inclusions are common and numerous in moldavites. Faceting a moldavite without one of these inclusions breaking the surface poses a great challenge to gem cutters. If a bubble breaches the surface on the pavilion side, it will have a minimal effect on value, based on its visibility. On the other hand, a bubble breaking on the crown side would be considered a significant blemish and would greatly reduce the gem’s value.

Poorly cut gems look very dull compared to custom-cut ones. Well-cut and polished moldavites are certainly worth the higher prices they can command. However, they’re still quite affordable. 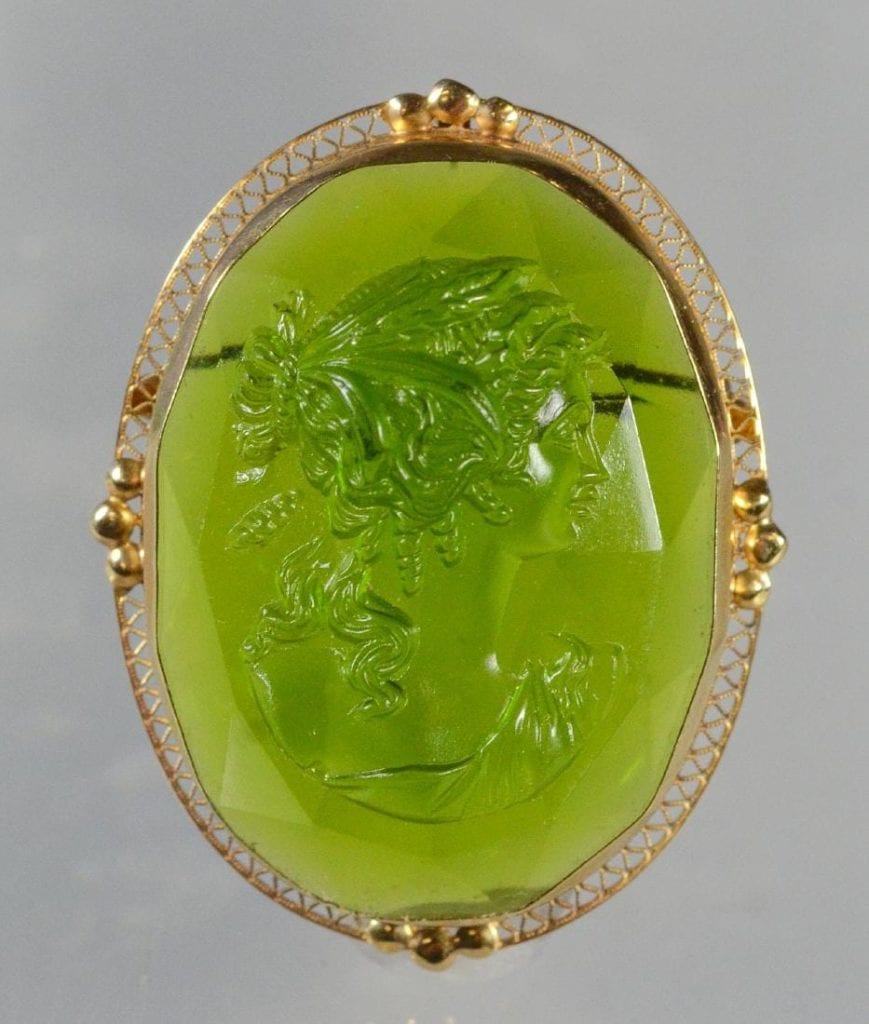 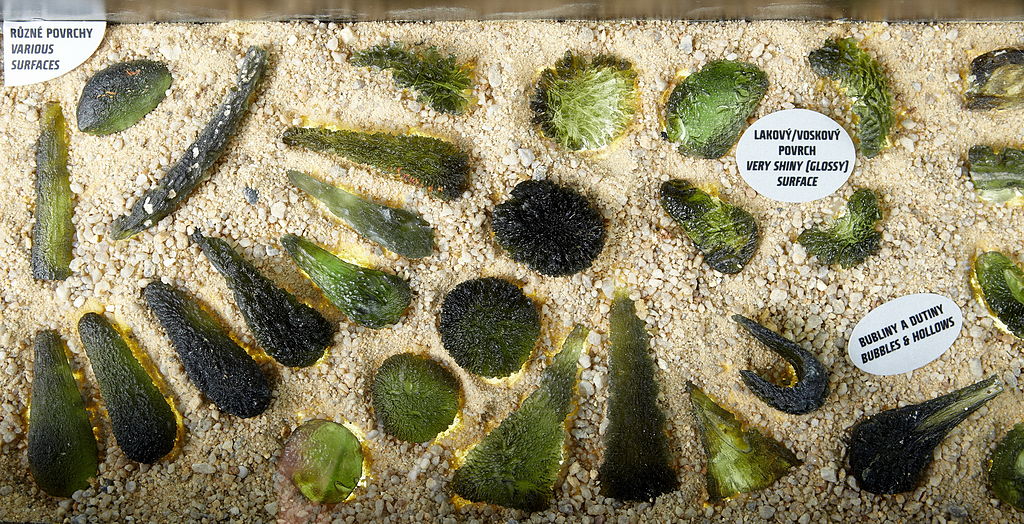 Moldavites are a type of tektite, natural glass formed by the melting and cooling of silica sand or rock ejected into the atmosphere after a meteorite impact. Only the natural glass formed by the meteorite impact at Nördlinger Ries in Germany, about 15 million years ago, can be called moldavite. Moldavites formed in the strewn field of the impact, at distances up to 280 miles from the crater.

Since prehistoric times, people have used many varieties of tektites, including moldavites, for ornamentation, tools, and religious purposes. Moldavites have even been found inside a cave in Austria and at locations beyond the strewn field, indicating prehistoric people collected and traded these pieces. However, moldavite was first described scientifically as “chrysolite” in 1787. Historically, people have used this term, which means “golden stone,” to refer to many different species of gemstones, including chrysoberyl, prehnite, and peridot. In 1836, scientists named the material moldavite, after a major source near the Moldau River in Bohemia.

Tektites from other localities have shown black, brown, and yellow colors. Moldavites have a green color — ranging from olive and yellowish green to bottle green — due to a low concentration of iron.

What are the Best Jewelry and Gem Designs for Moldavites? 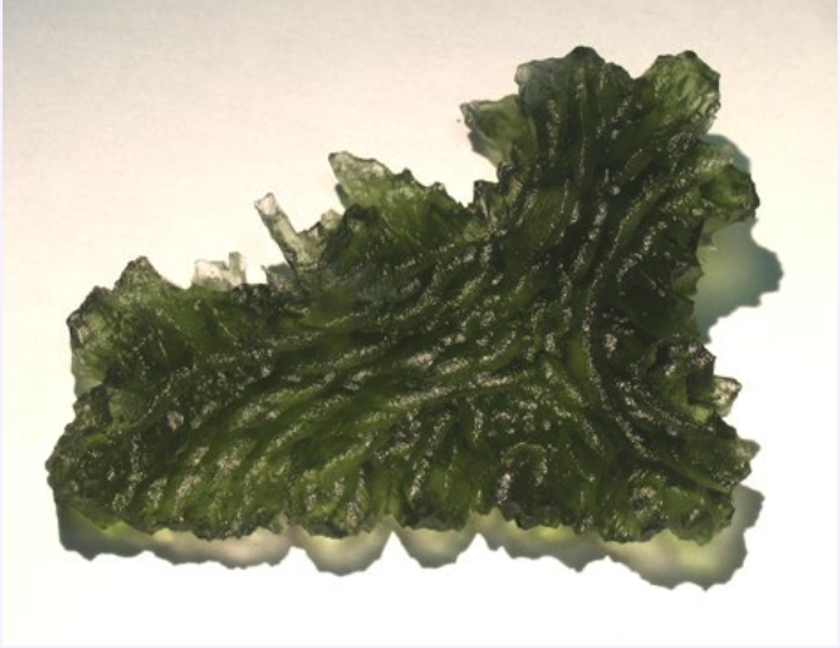 Moldavites with numerous spines and edges, like this 45.36-ct specimen from Besednice, Czech Republic, are sometimes called “hedgehogs.” Note the swirling flow patterns, which preserve the moments when this material was actually a liquid. © All That Glitters. Used with permission.

Lapidaries can sometimes carve this rough into lovely, fanciful shapes. Of course, some connoisseurs prefer jewelry made with moldavites left in their natural shape or cut to showcase their inclusions. 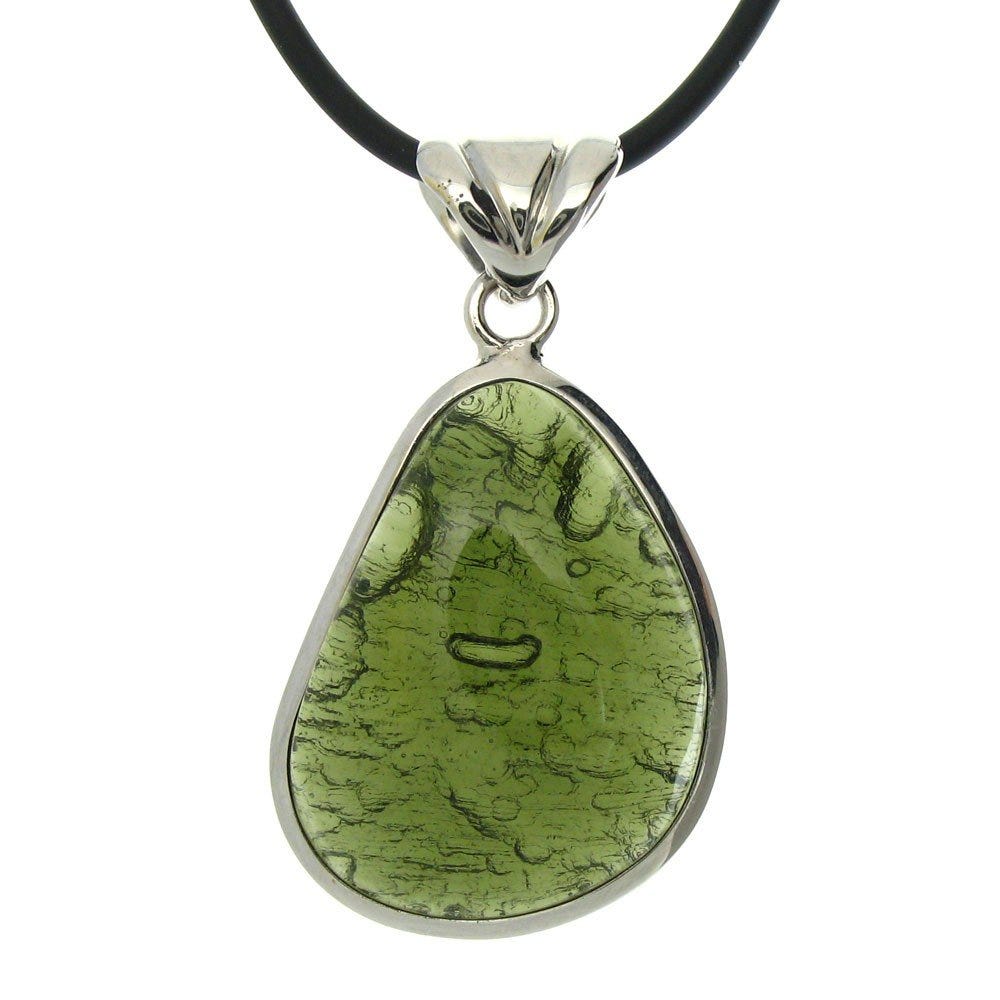 The most popular faceted cuts for moldavites are simple rounds and emerald cuts. Small cabochons are also common choices. 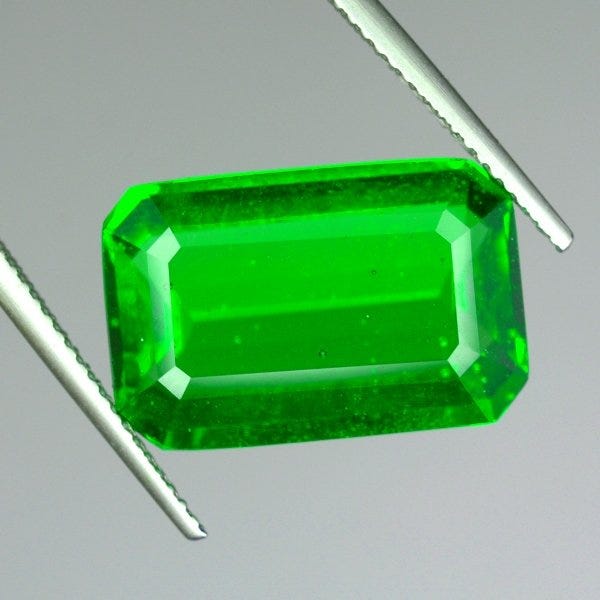 Although named after the emerald, emerald cuts can be used on many different gems. Faceters usually choose an emerald cut to highlight a gemstone’s color. 10.1-ct, emerald-cut moldavite. Photo courtesy of liveauctioneers.com and ARF International Co., Ltd.

People who wish to highlight the extraterrestrial connection can combine moldavites with meteorite materials in unique jewelry pieces. 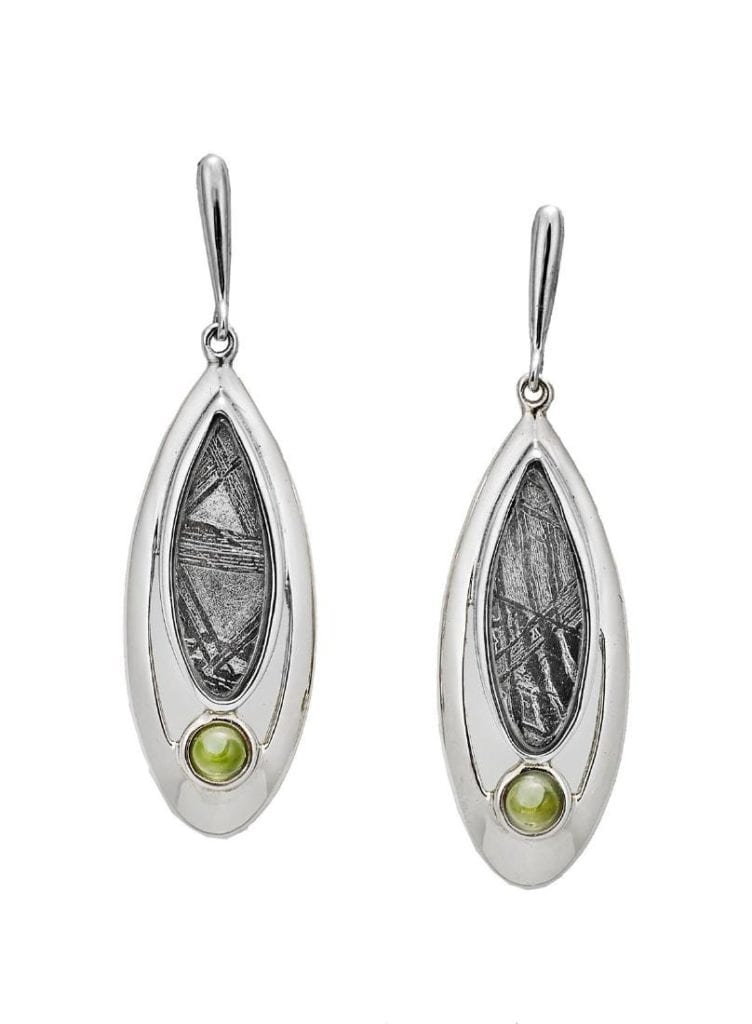 These earrings feature moldavites with silvered meteorite from the Muonionalusta find. Photo courtesy of liveauctioneers.com and I.M. Chait Gallery/Auctioneers.

Like all tektites, moldavites can vary in chemistry and have a wide range of refractive index (RI) and specific gravity (SG) values. Testing for X-ray fluorescence and searching for inclusions are the best ways to start identifying these gems.

Moldavites typically have a wavy, roiled “heat wave” appearance, like hessonites. They also contain numerous inclusions of gas bubbles, swirls (flow marks), and grains or long wires of lechatelierite (amorphous silica glass). Finding lechatelierite inclusions is a strong indication you have a moldavite. Since these inclusions have a lower RI than the host moldavite, they will appear in high relief if you view a gem through a loupe or immersed in a refraction liquid with an RI that matches the gem.

How Can You Spot a Fake Moldavite?

Before moldavites were recognized as a type of natural glass, it was believed they were just slag from the Bohemian glass-making industry. Distinguishing moldavites from synthetic glass remains difficult. Jaroslav Hyršl’s 2015 article, Moldavites: Natural Or Fake?, contains a great deal of useful information for separating genuine moldavites not only from contemporary Chinese imitations but also 19th century imitations.

Beware of any material sold as “African moldavite.” Africa does yield tektites, such as Libyan desert glass and ivorite from Ivory Coast. However, by definition, moldavites occur only in the strewn field around the Nördlinger Ries impact.

Libyan desert glass can have a pale yellowish green color, while moldavites tend to have a darker green color. Ivorites only occur in black. Most likely, so-called “African moldavites” aren’t tektites at all but actually manufactured glass pieces sold under a misleading name. They tend to look clearer than actual moldavites, with fewer inclusions. 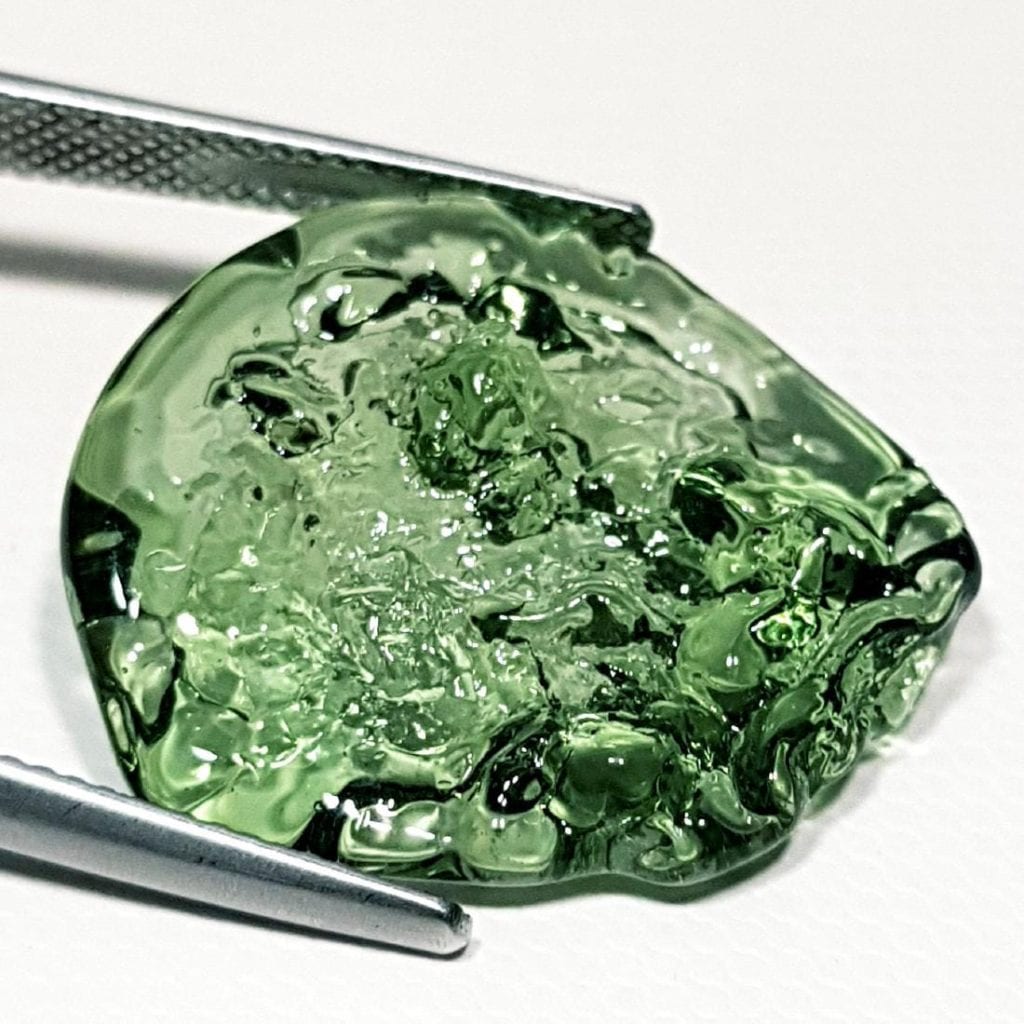 No natural moldavites occur in Africa. Most likely manufactured glass, this piece has great clarity compared to actual moldavites. Photo courtesy of liveauctioneers.com and Zaaraqueen.

The main source of moldavites is the Czech Republic. Other sources include the following: Austria, Germany, and Poland.

Lapidaries have faceted moldavite gems weighing up to 25 cts. Rough moldavites up to 235 g in weight (about 1,1175 cts) exist, but pieces that large are very rare.

The website tektites.co.uk lists the largest/heaviest recovered tektites, organized by country. Per this source, the heaviest known moldavite comes from Bohemia and weighs close to 500 g. This moldavite was referenced in the 2001 book Tektites by Ken McNamara and Alex Bevan.

How to Care for Your Moldavite Jewelry

Moldavites have a hardness of 5, which makes them susceptible to scratching. As ring stones, they should receive protective settings and only occasional wear. However, other jewelry uses, such pendants and earrings, should present no problems.

Since moldavites typically contain numerous inclusions, don’t use steam or ultrasonic systems to clean them. Instead, use a soft brush, mild detergent, and warm water. Consult our gemstone jewelry cleaning guide for more recommendations. 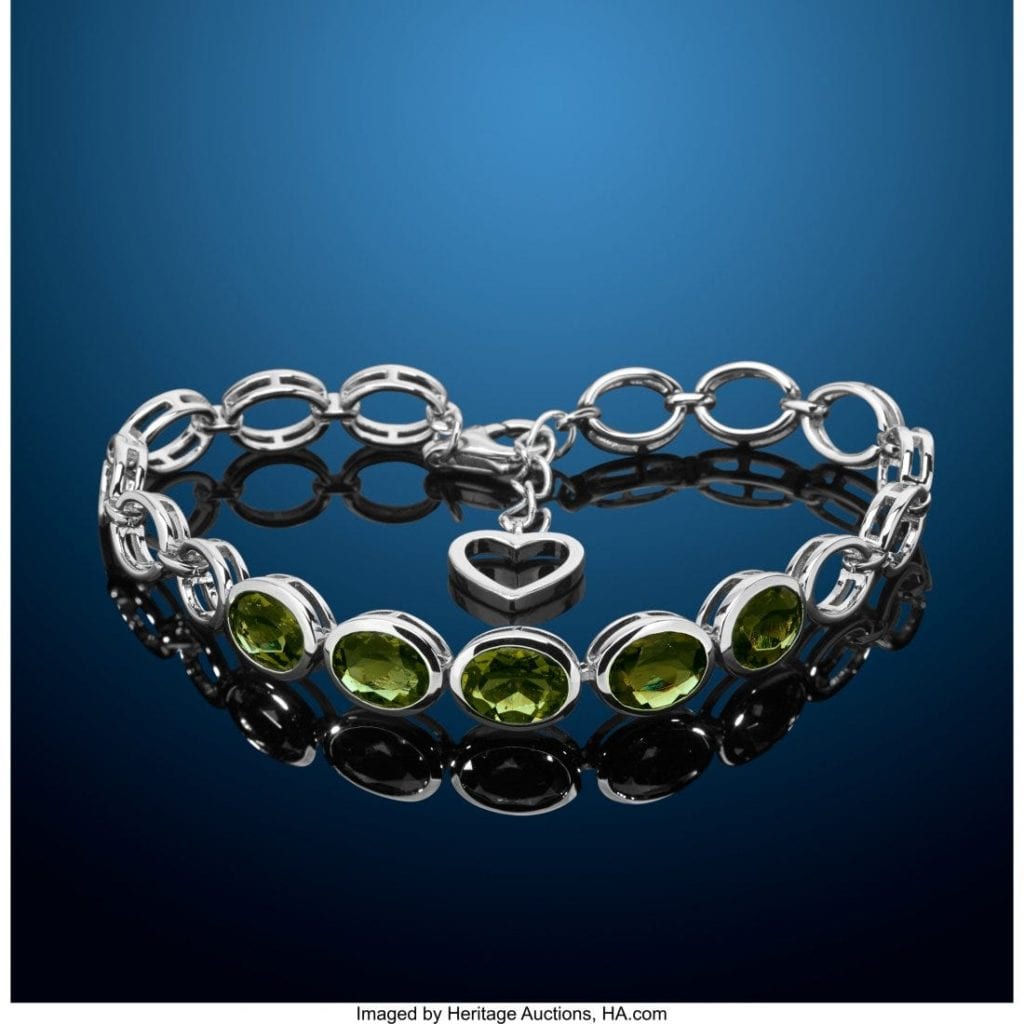