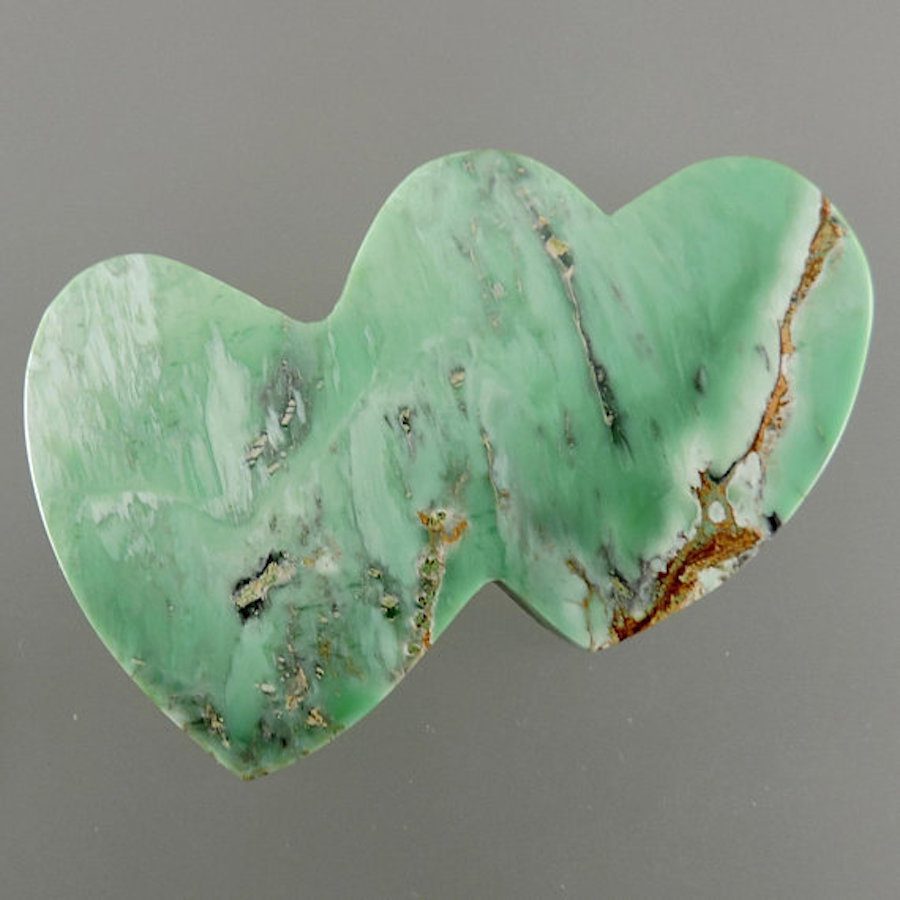 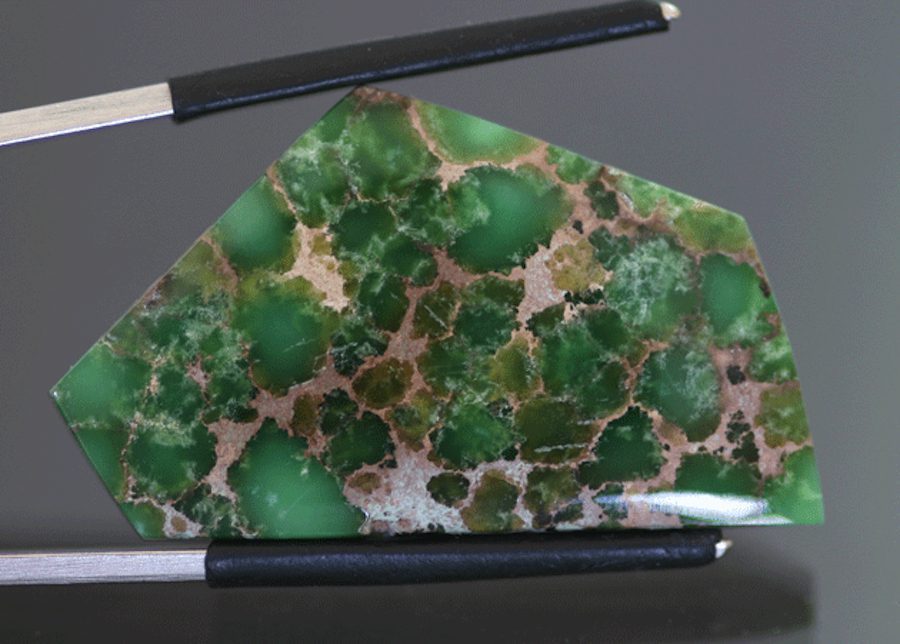 Variscite lends its name to the variscite mineral group, which includes gem materials like scorodite and the very rare mansfieldite. It also forms a series as the aluminum-dominant end member with iron-dominant strengite (FePO4 · 2H2O).

Massive variscites have no cleavage planes, which means cabs and decorative objects cut from this material may have excellent structural integrity. Nevertheless, these gems have great susceptibility to scratching due to their very low hardness. Therefore, wear these gemstones in jewelry with protective settings, especially if used as ring stones. 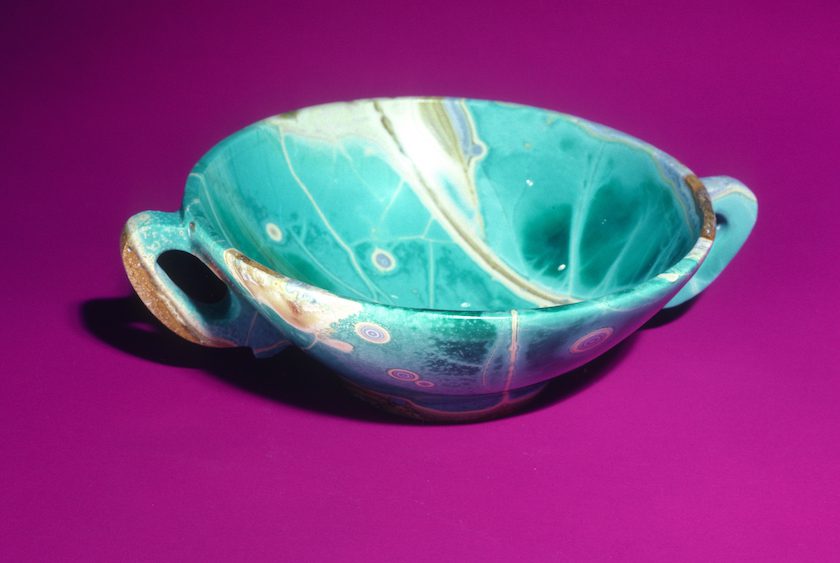 Chromium and vanadium impurities contribute to variscite’s typically green range of colors. However, the presence of iron may give some stones known as ferrian or ferroan variscites a rare red or violet color. 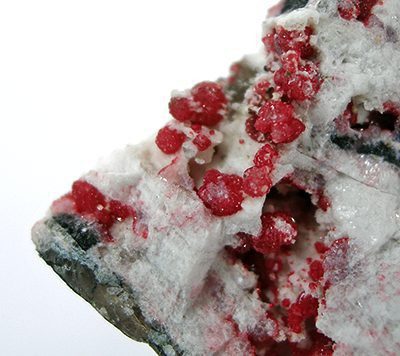 Metavariscite is a monoclinic dimorph or polymorph of variscite. Cut metavariscite may resemble fine, translucent jadeite. 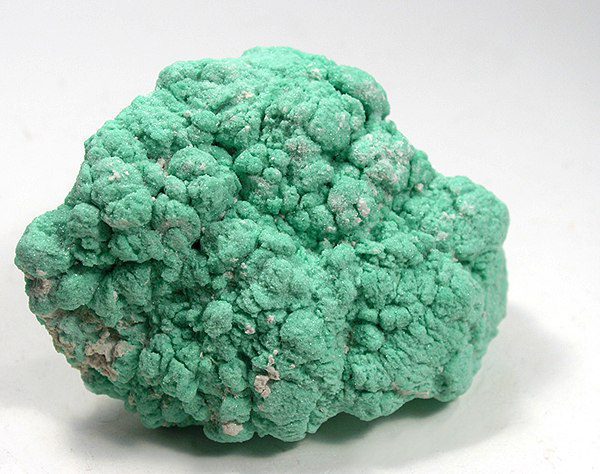 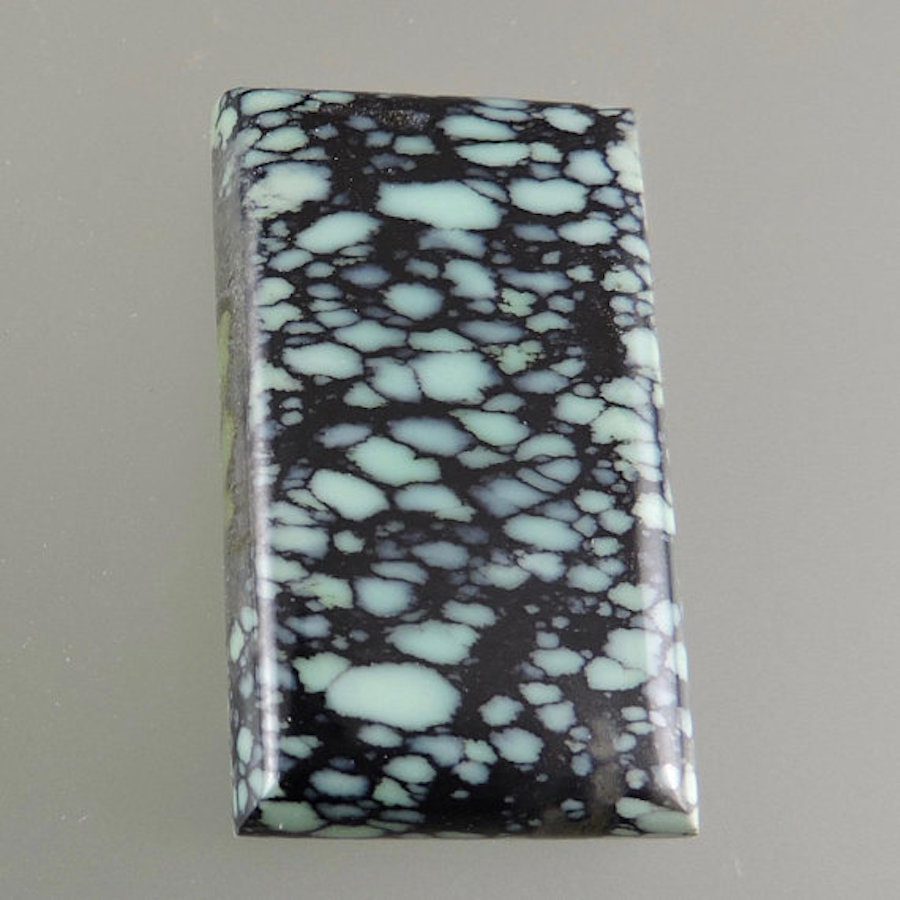 This gem material has garnered quite a few trade names.

Variscite mixed with quartz from Ely, Nevada, is sometimes called amatrice or amatrix, for “American matrix.” (However, such mixes also occur in Australia).

Variscites from Utah usually feature interesting patterns, which makes material from this state very popular for cabbing and carving. These variscites are sometimes called lucinites or utahlites. 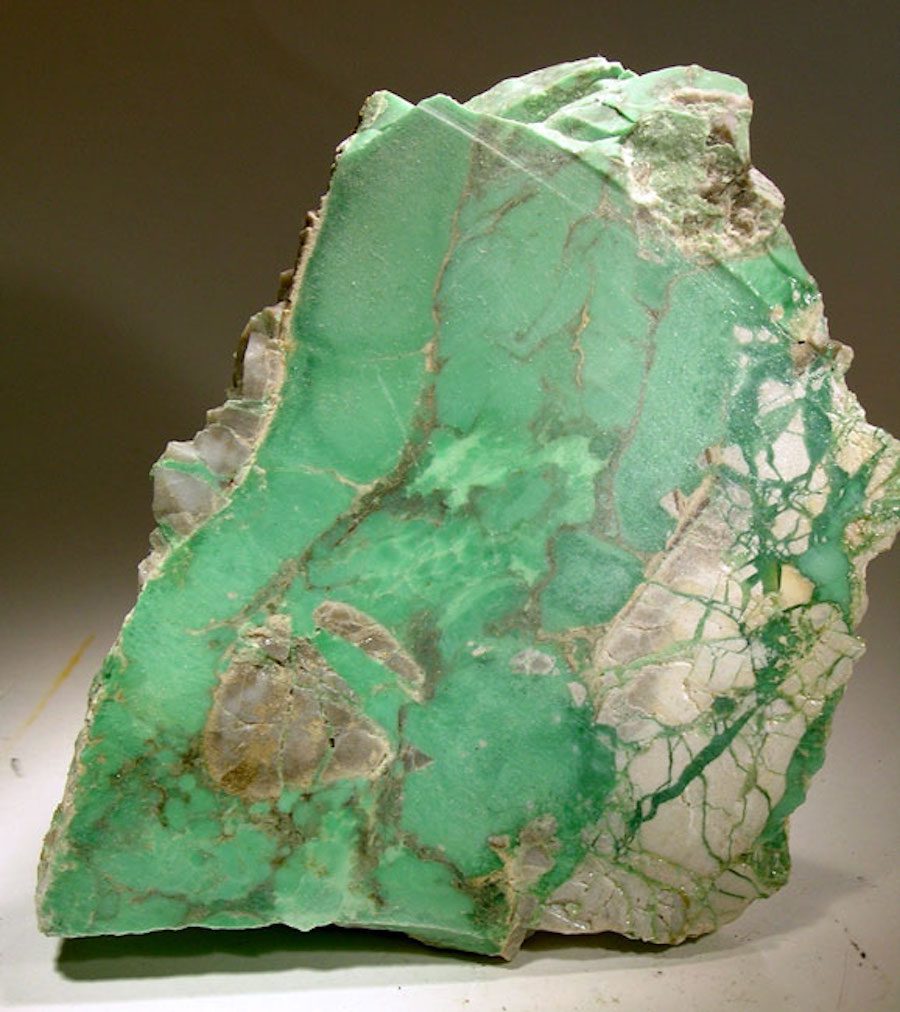 Banded variscite has been called sabalite as well as trainite. 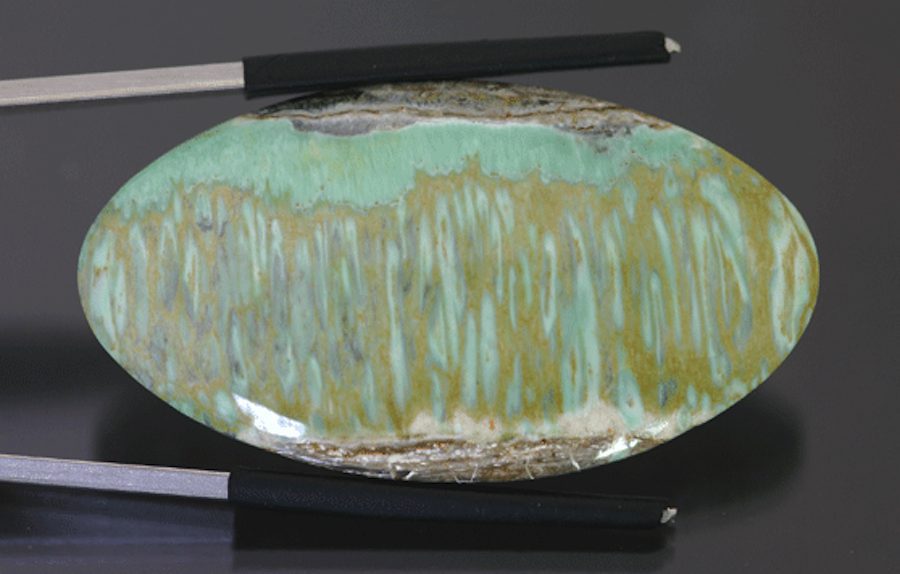 People have created jewelry from variscites since Neolithic times, more than 6,000 years ago. Neolithic beads carved from variscite discovered in Brittany, France were called callaïs or callaina (callainite), after a gemstone described by the Classical Roman scholar Pliny the Elder. Although first believed to be turquoise from China, it became evident this material wasn’t turquoise but variscite. However, the name callaïs for these beads remains in use in art history and archeology.

While not proof of Neolithic trade between Europe and China, researchers have determined that some of these variscites came from Sarrabus on the island of Sardinia (Italy). Thus, these artifacts still point towards a large prehistoric gem trade network in Europe.

A callaïs or variscite necklace created around 4500-4,000 BCE, found in the tumulus of Mané-er-Rhoek near Locmariaquer (Morbihan, Bretagne, France). From the collection of the Museum of History and Archeology, Vannes, France. Photo by Vassil. Public Domain.

How Can You Distinguish Variscites from Turquoise Gems?

Even experts may find distinguishing variscites from turquoise gems challenging. Although variscite has lower refractive indices than turquoise, common turquoise treatments may mask this. Generally, variscite “looks greener” than turquoise, though this is hardly diagnostic.

Variscites have a significantly lower hardness, but testing this would require a destructive scratch test. Conduct this only on rough material or on an inconspicuous area of a finished gem as a last resort.

Scientists have synthesized variscites for various projects, including research into how soils react to phosphates in fertilizers.

You may find “synthetic variscites” for sale online. Interestingly, some of these jewelry stones have pink or red splotches on a green body color or a pink or red body color. (Perhaps a consumer demand exists for the rare ferrian variety). As far back as 1988, synthetic or imitation variscite was on display at the Tucson Gem and Mineral Show. However, it isn’t clear whether these materials are truly lab-created variscites or simply simulants, “faux” pieces that just resemble natural variscites. These may be examples of the term “synthetic” simply used in the popular sense of “not real.”

Variscites typically don’t receive any treatments or enhancements. However, when misrepresented deliberately as turquoise, they may receive dyes or wax/polymer impregnation treatments to make the deception more convincing.

While variscites are relatively rare, they occur in many localities across the globe. However, the US state of Utah is the principal source of gem-quality material. Fairfield County, Utah produces nodules with rich colors up to 24 inches across mixed with other massive complex phosphates. Tooele, Utah also produces massive, rich green nodules, suitable for cutting.

Suitable only for cabochons, variscite nodules may weigh many pounds and measure up to 24 inches in diameter. However, lapidaries may cut variscite mixed with other phosphates into spheres or for use in decorative displays. 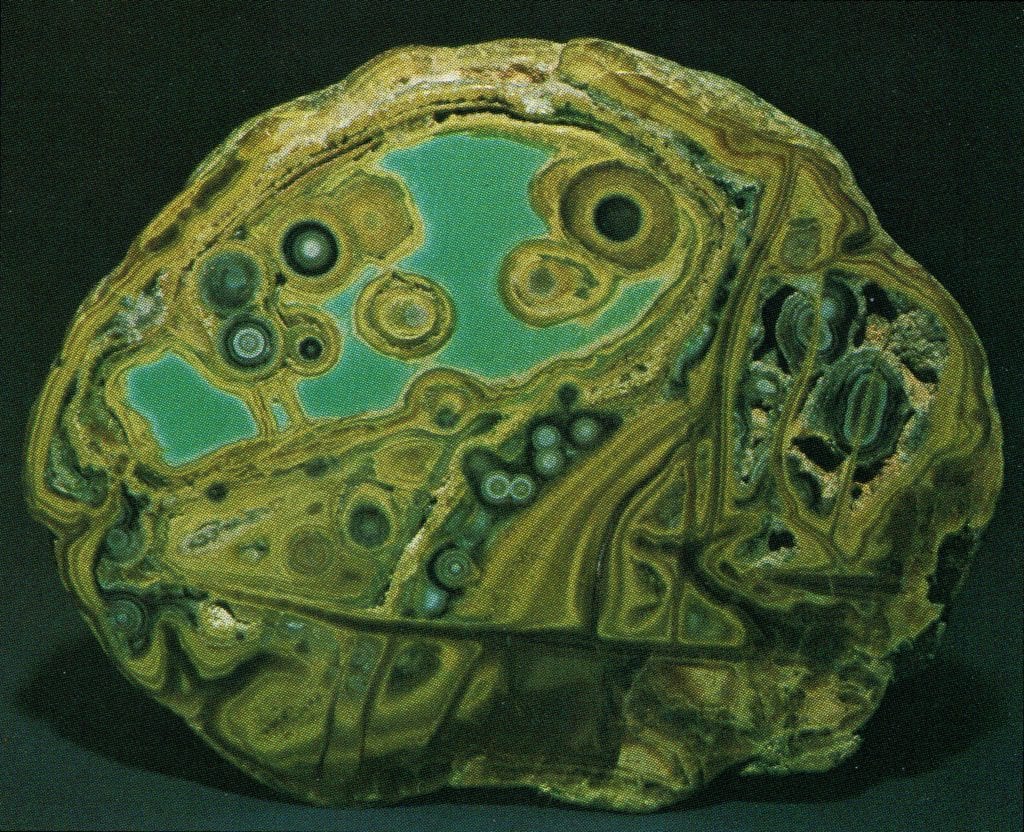 How to Care for Variscite Jewelry