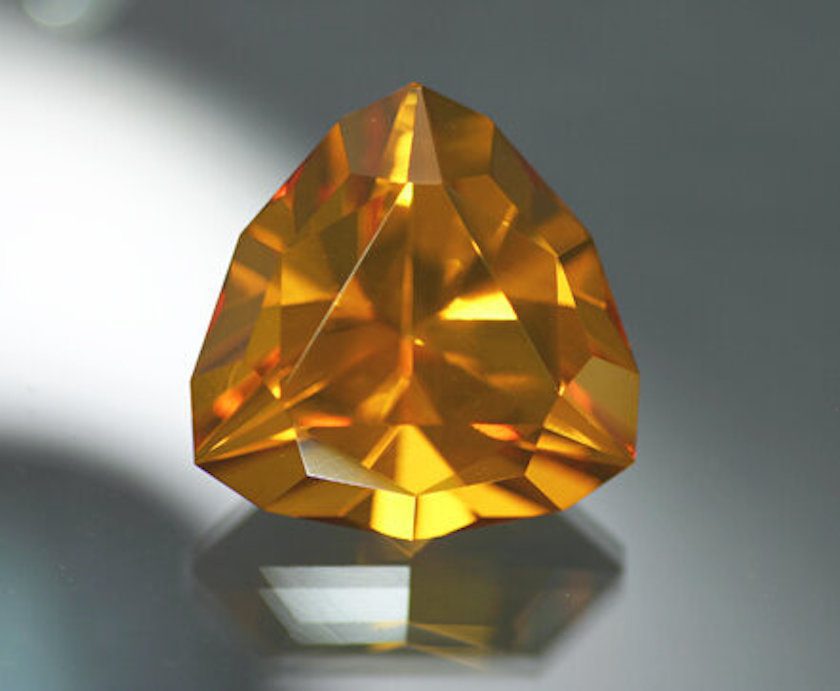 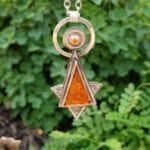 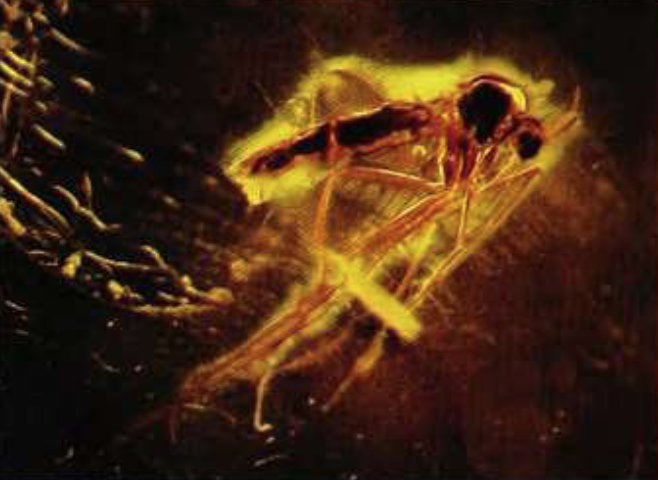 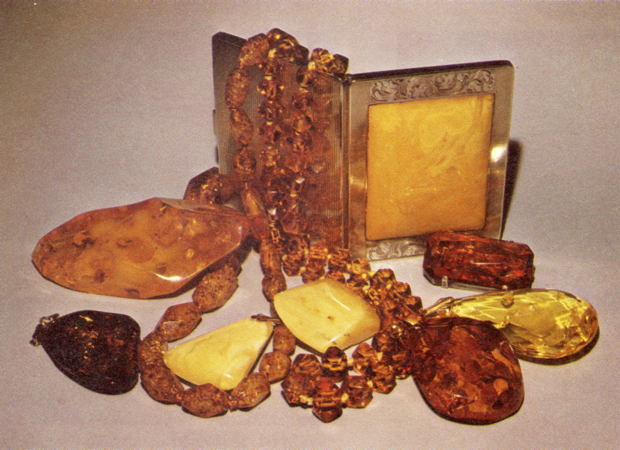 Preserved resin younger than 30 million years is known as copal, as is the organic gem material from the copal tree, Protium copal. Most gem pieces come from South America, Africa, and New Zealand. “Kauri Gum” is a copal from the kauri pine tree of New Zealand. 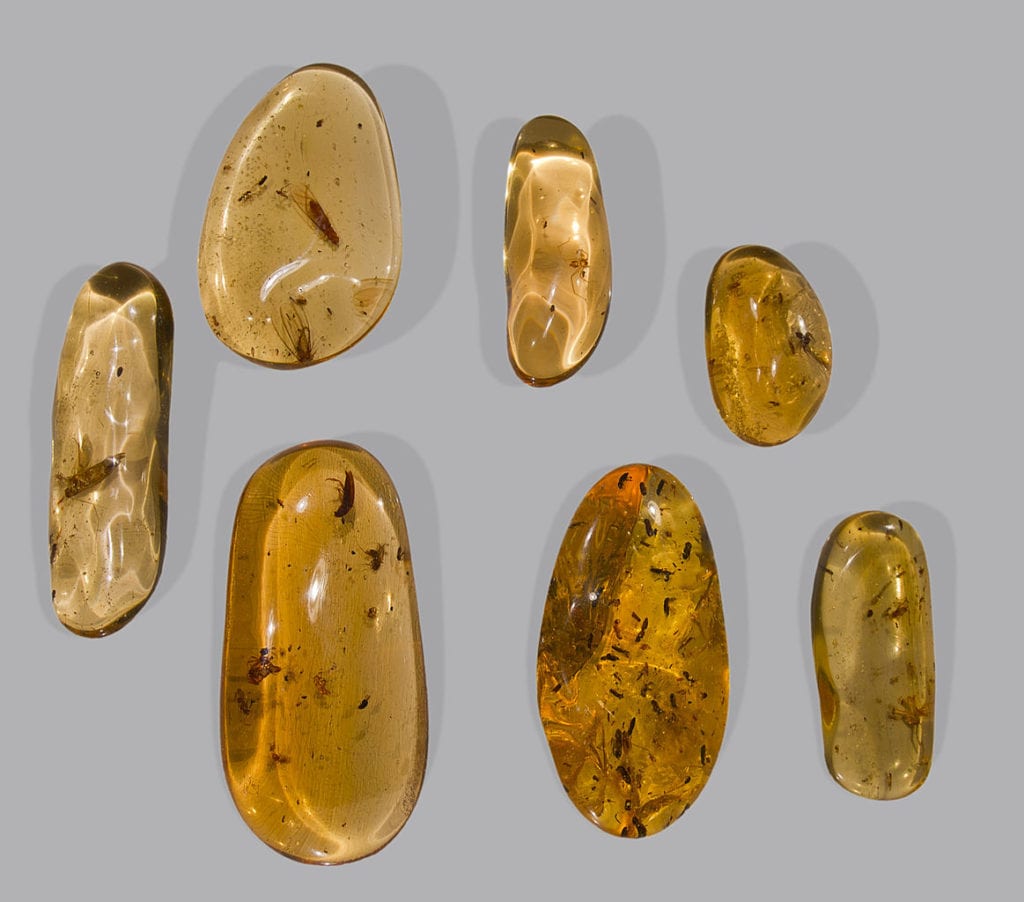 Although amber is commonly referred to as fossilized resin, it’s not a fossil in the strictest sense. Most fossils begin when an animal or plant is buried in the earth. Over millennia, the organic material in fossils is slowly replaced with elements from the mineral kingdom. In contrast, amber’s organic elements haven’t been replaced. Instead, the resin has undergone a chemical transformation into a polymer, a natural plastic.

Raw amber pieces from the Baltic region, left piece is 2.7 cm across, right piece is 3.1 cm across. Photo by James St. John. Licensed under CC By 2.0.

Star spangles, flattened starburst shapes, are another type of inclusion. Caused by stress, these internal fractures radiate from a central point. While quite attractive, most are human induced. Hence, they don’t fetch the same value as a good-quality insect.

Ancient techniques for identifying amber are still useful today. If rubbed vigorously on a piece of wool, the real deal will generate a static charge strong enough to pick up a small piece of ash. When it’s warm enough, it also gives off a distinctive, pleasant scent. These techniques may distinguish the genuine material from plastic imitations (and entertain inquisitive children). 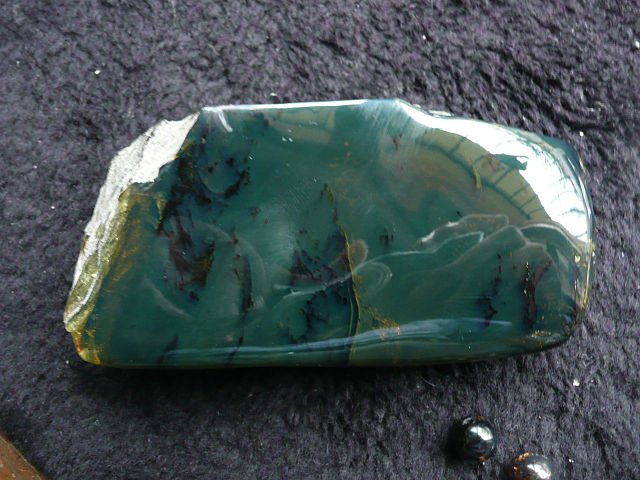 Green amber, Dominican Republic. Photo by The Singularity. Licensed under CC By 3.0.

A specific gravity (SG) test can also help weed out the plastic imitations. You can concoct a handy homemade testing liquid by boiling water and adding as much salt as you can dissolve in it. This will have a density of about 1.13. Amber, with a SG of 1.08, will float in this solution. Most plastics will sink. However, a few plastics have a density as low as 1.05. Many can have a lower SG than amber if they have air bubbles inside. So, if your sample sinks, you can be sure it’s not amber. If it floats, you still need to conduct more tests.

This is a destructive test, but if conducted with care, it can leave no visible marks. First, find a place on your specimen where a mark would be as unobtrusive as possible (for example, on the bottom, an edge, or an area with existing scratches). Next, heat the tip of a needle until it glows red. Touch the selected spot just enough to release a tiny whiff of smoke. Now comes the hard part. Smell the smoke. If it’s genuine, it will smell like fine incense. If it’s plastic, it will smell chemical and offensive. (This is another reason to make your test on as small a scale as possible).

If you’re unable to make the distinction based on fluorescence, you’ll have to turn to a destructive test. On an inconspicuous area of the specimen, place a drop of acetone. Let it sit for three seconds, then wipe it off. Copal will have the surface damaged by the acetone, whereas amber will show little or no change from the brief exposure.

Amber can be darkened by heating. If done properly, this also creates star spangles. Dyeing is a common treatment. 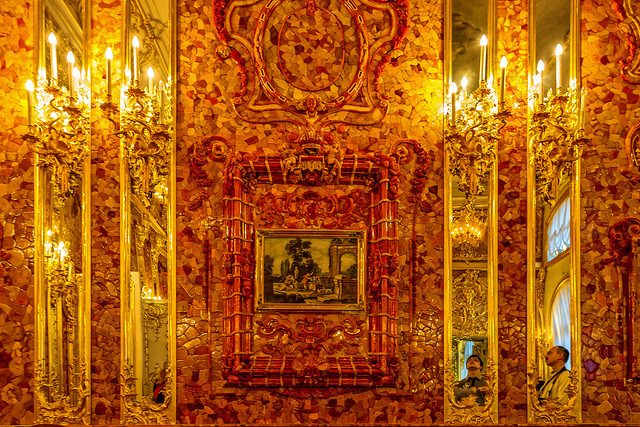 Decorated with panels made from amber and backed with gold leaf, the celebrated Amber Room was originally constructed in the 18th century in the Catherine Palace near St. Petersburg, Russia. This “Eighth Wonder of The World” was looted during WWII and has disappeared. A reconstruction project was begun in 1979 and completed in 2003. This is the reconstructed chamber in the Catherine Palace. Photo by Dmitry Karyshev. Licensed under CC By 2.0

Amber from Cedar Lake, on display at the Manitoba Museum, Winnipeg, Canada. Photo by Mike Beauregard. Licensed under CC By 2.0. 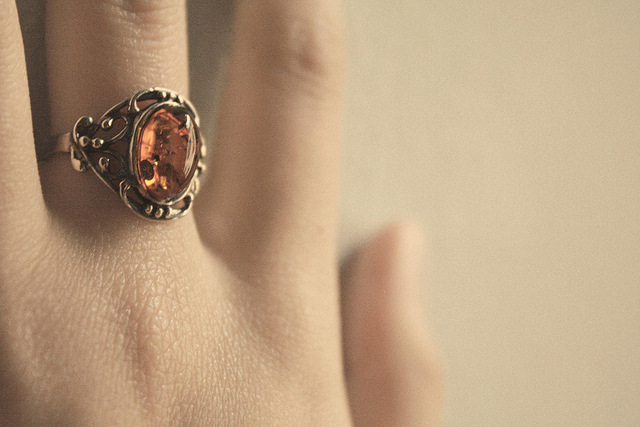 “Amber Tells The Past.” Photo by Chiara Cremaschi. Licensed under CC By-ND 2.0. 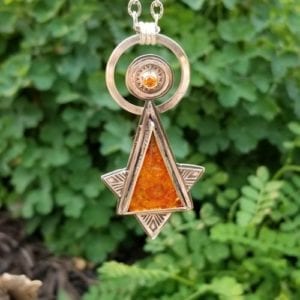 One of the earliest known gems, amber’s bright sunshine hues delight and enthrall. Learn more about this ancient gem’s qualities in our amber… 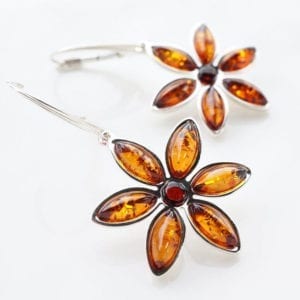 Amber has a long history of ornamental use and popular associations with animals, energy, and the Sun. Learn more about amber symbolism and lore.…