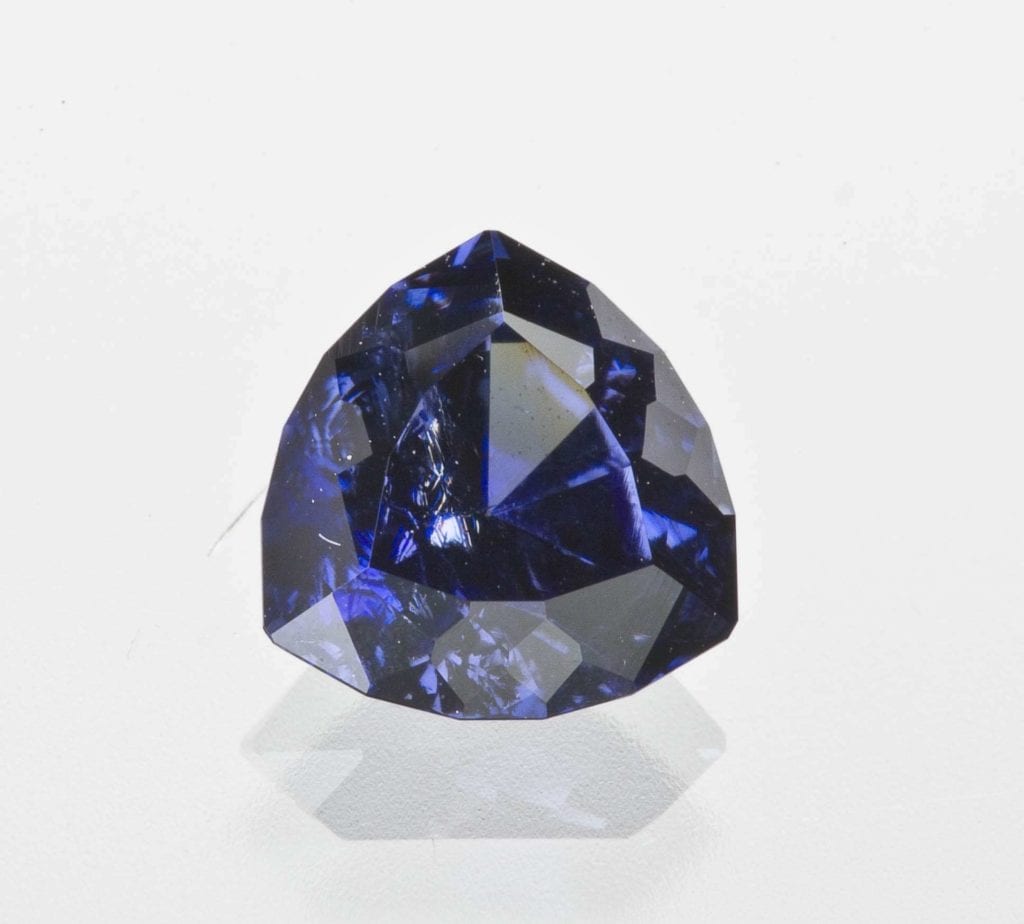 This gem is quite expensive. Rich blue, clean stones at carat and above sizes can command high prices. Clarity enhances value, especially eye clean or better scores. Very light and very dark stones reside at the lower end of the value spectrum. At the pinnacle, you’ll find medium-dark stones.

Declared the state gem of California in 1985, benitoite was discovered in 1907. At first, opinions about the material’s identity ranged from volcanic glass to spinel and, due particularly to its color, sapphire. However, the stone’s greater dispersion and birefringence values distinguished it from sapphire. Further examination revealed it as a new gemstone.

Benitoite colors can range from various shades of blue to white and, more rarely, pinkish or colorless. Rough can show color zoning.

With a hardness of 6.5, benitoites are tough enough for most jewelry applications. However, household dust, a common daily hazard, can still scratch them. Thus, protective settings are recommended, especially for ring use. Otherwise, this collector’s gem is very wearable.

Benitoite’s sometimes intense blue color usually masks its high dispersion, which can potentially cause stones to twinkle with red and green flashes. Then again, the stone’s scarcity also masks it from the general public, who remain largely unaware of this gem. Nevertheless, when the time comes to cut this rare stone, consumers face a choice between dispersion and body color.

While some admirers will forgo the dispersive display for a darker blue stone, others will want a lighter stone with more evident dispersion. The gem pictured to the right shows a balance between rich body color and visible dispersion.

Because of the rarity of this material, even custom gem cutters sacrifice the cut to produce the largest possible gems. Thus, you’ll commonly find windows and less than optimal proportions in faceted stones.

Laboratories have created synthetic colorless crystals too small to facet.

Heating can turn colorless benitoites orange. These stones will then show orange/pink dichroism. However, this treatment can also destroy gems due to inclusions exploding in the process. (See “Inclusions” in the Benitoite Information table above).

Crystals can reach a size of ~2 inches across. However, facetable areas are always very small because crystals are badly flawed. Most gems weigh under 1 carat but may reach 2-3 carats. Finished gems are almost always under 1 carat and usually less than 0.5 carat. Larger stones are exceedingly rare.

The Smithsonian Institution holds the largest stone on record, 7.8 cts.

A 6.52-ct gem was cut for a private collector but stolen in transit.

The American Museum of Natural History in New York holds a 3.57-ct gem.

Caring for Your Benitoite Jewelry

Due to inclusions, avoid cleaning benitoites with mechanical processes, such as ultrasonic or steam systems. Instead, use a soft brush, mild detergent, and warm water for cleaning. Consult our gemstone jewelry cleaning guide for more recommendations.

Ultraviolet testing can be crucial for gemstone identification. Learn the basics of this technique as well as how to make your own UV viewing box.…