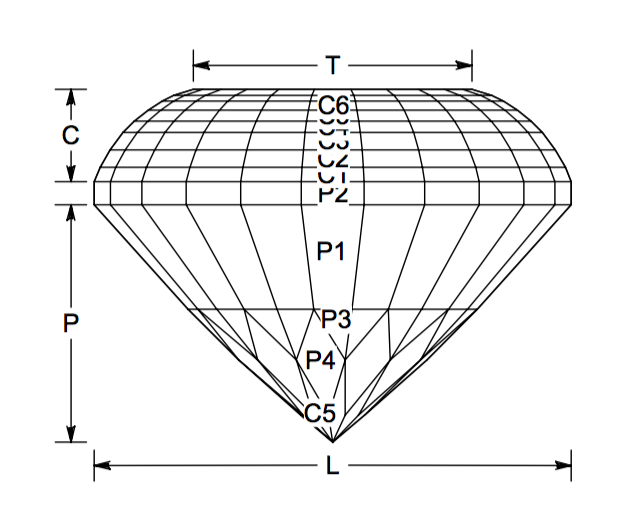 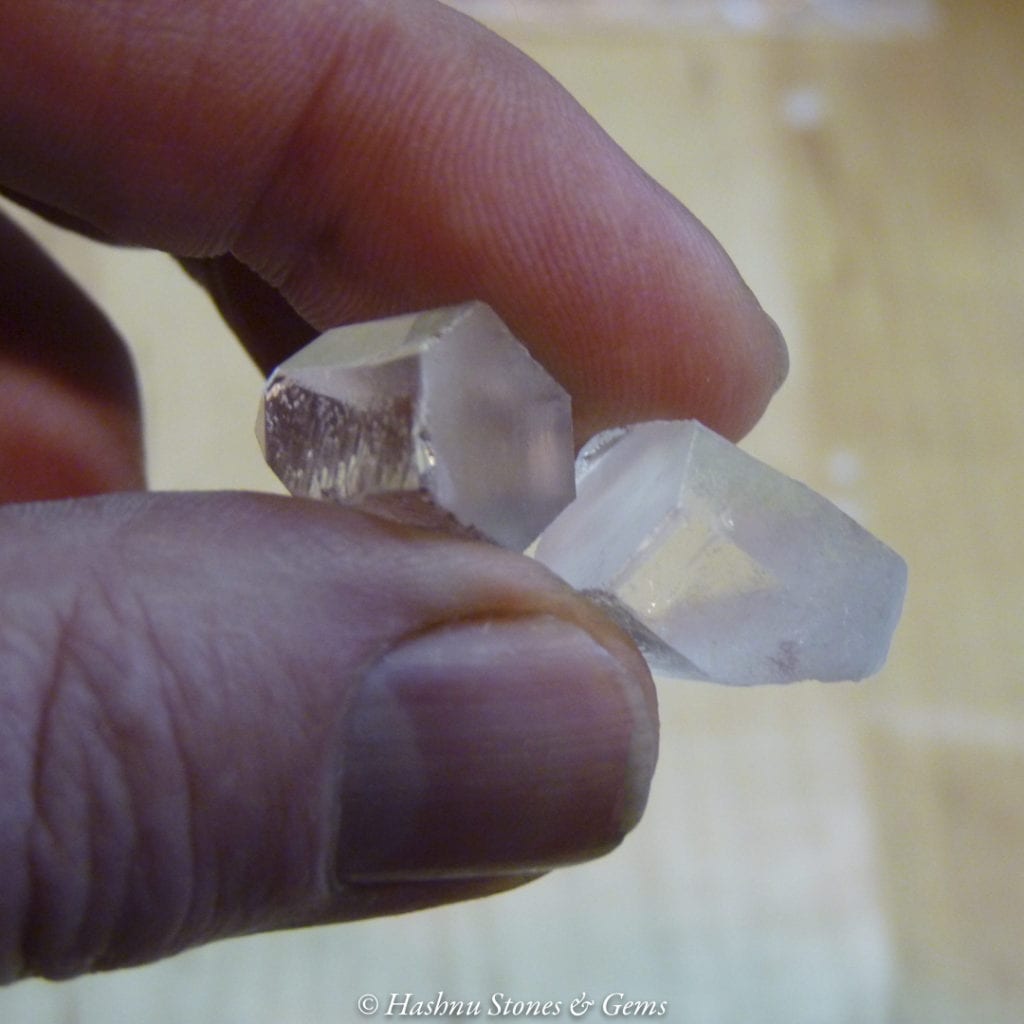 Clear quartz sawed and ready to be preformed and dopped. © Hashnu Stones & Gems. Used with permission.

Once you’ve selected your rough stone, the next step to creating your one-of-a-kind story gemstone is choosing the gem design. At this stage, the jeweler usually enters the process. Your precision faceter can recommend professional jewelers who’ll support your creative vision. Jewelers will have valuable input regarding the size, design, and mounting of the finished gemstone. Keep in mind that a jewelry piece or style can inspire the gem design (or vice versa).

From Classic To Contemporary Gem Design: An Aquamarine Story

I often hear customers preface their stories by saying they don’t want to wear the same jewelry styles as their mothers or grandmothers. (Interestingly, great-grandmothers’ styles tend towards being cool). Classic jewelry lines are timeless. However, each generation has its own voice and style. Janet had inherited several nice pieces of jewelry, all featuring small to medium-sized gemstones. She wanted to honor her mother and grandmother by wearing the pieces that had been handed down in her family over the years. However, the style was outdated and the pieces too cumbersome to wear.

Janet was a graphic designer. She’d reached a point in her career where she had extra income. She designed her own pieces with the idea of using the vintage jewelry’s stones in her new, contemporary creations. Aesthetically, they all worked out. Except the pendant. Janet needed a larger stone for its showcase center.

Janet saw my work in jewelry magazines she’d bought to learn about jewelry and gem design. She emailed me and asked if I could help. She knew exactly what she wanted: an aquamarine in a shield-type cut. I sent Janet some drawings and pointed her to websites that featured these faceting designs. She quickly chose one and sent me the link. With Janet’s approval, I purchased a very nice medium-colored aquamarine with the perfect shape for her design from a gem rough broker and colleague. I cut the stone and recommended a fine goldsmith. Janet’s gem story had a happy ending. 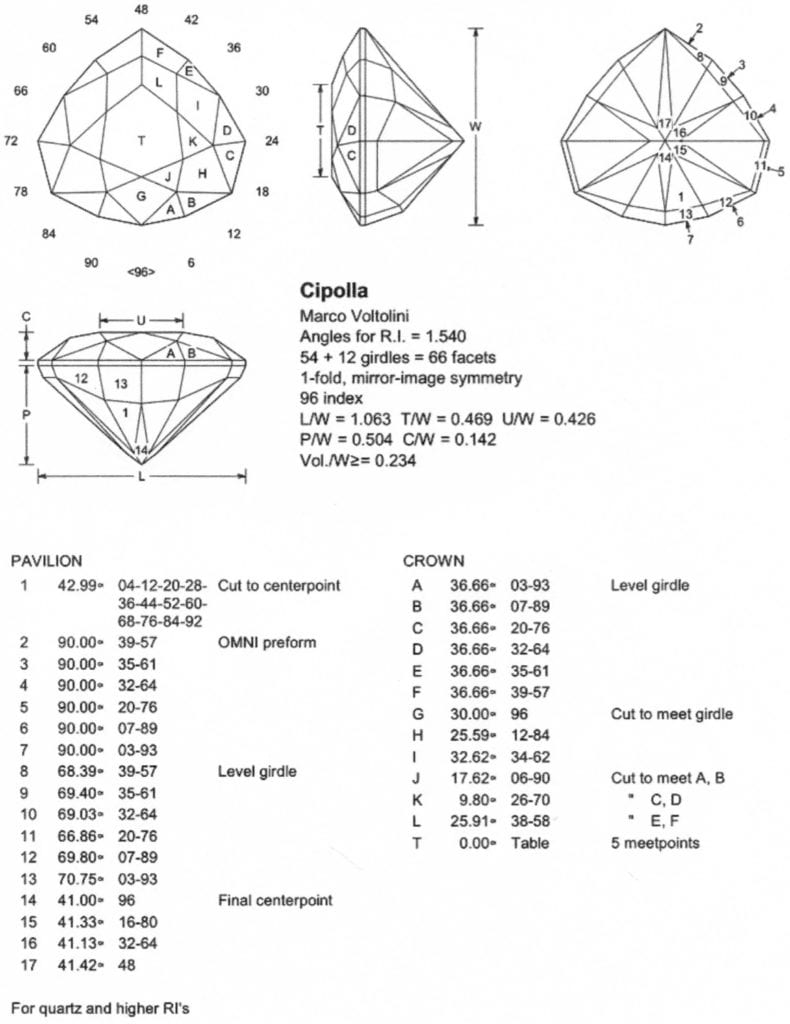 Most gemstones are set in jewelry. However, they’re also given as gifts, used for their purported metaphysical properties, or displayed solo in collections. What do you want to do with your gemstone? In the gem design phase, consider carefully the purpose of your individual stone.

The gem design process is a series of decisions made to maximize the stone’s beauty. Whatever the gem’s intended use, its design should highlight its finer attributes. While you’re entertaining different designs, keep in mind the following factors:

Some stones may have color zoning. Others may be pleochroic, showing different colors when viewed from different directions. Precision faceters must orient these types of stones so the most desired colors are prominent.

Depending on the gem design, a stone’s light return can vary from very bright to somewhat dull. Although a generous amount of light return is preferable, other gem attributes may call for a compromise.

In finished gemstones, scintillation is very desirable. Faceters should factor this attribute properly into the design equation.

Natural stones may have inclusions or flaws that need to be cut out or hidden. This will affect how faceters orient rough stones.

Gemstone hardness and dispersion will also influence the orientation and gem design process. Research these and other gem attributes on the International Gem Society (IGS) website and through the IGS Certification Course.

Jewelers, faceters, and clients should take all the above factors into consideration when choosing a gem design. Unfortunately, they can’t have the best of each. These gem attributes tend to play against each other. For example, the best color orientation may produce a smaller size gemstone than desired because the stone is shorter in one direction. Attaining the best attributes is much easier with synthetic stones. However, nature makes the growth of gem crystals a sometimes unpredictable process with varied results.

Once you’ve selected the best orientation and desired attributes for your stone, you’ll need to look at gemstone shapes.

For jewelry stones, most people choose standard shapes such as rounds, ovals, pears, rectangles, and squares. Although these classic shapes are fine choices, your faceter can discuss other shapes with you. Faceters can also show you computer aided designs (CAD) and pictures of cut gemstones. Of course, you can also show your faceter a picture of a gem design you’ve found and like.

Once you’ve selected a design, modifications can be made. To enhance the beauty of your specific stone, angles in designs are sometimes modified. Gemstones have different densities, refractive indexes, and critical angles. When optimized in an appropriate gem design, these attributes may make a brighter and more outstanding finished stone. For example, garnet and aquamarine have significantly different critical angles. Using the same design for both stones could adversely affect their beauty. 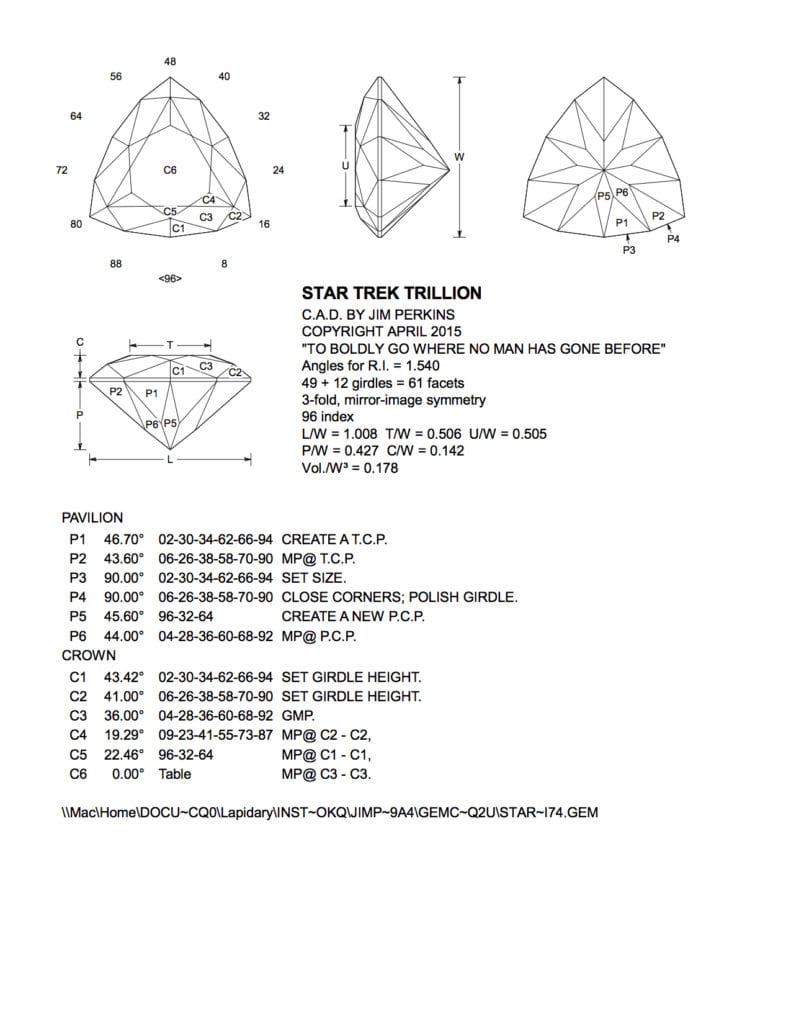 Faceters may suggest certain embellishments to your gem design, such as frosted or concave facets, which may enhance the beauty and individuality of your gemstone. Make sure your faceter explains how any such additions will affect the finished stone. Most importantly, make sure you and your faceter agree on a final design before giving the OK to start cutting your gemstone. Once the faceting starts, you can’t reconstruct the original gemstone. At best, you’ll have to restart with a smaller stone or stones. 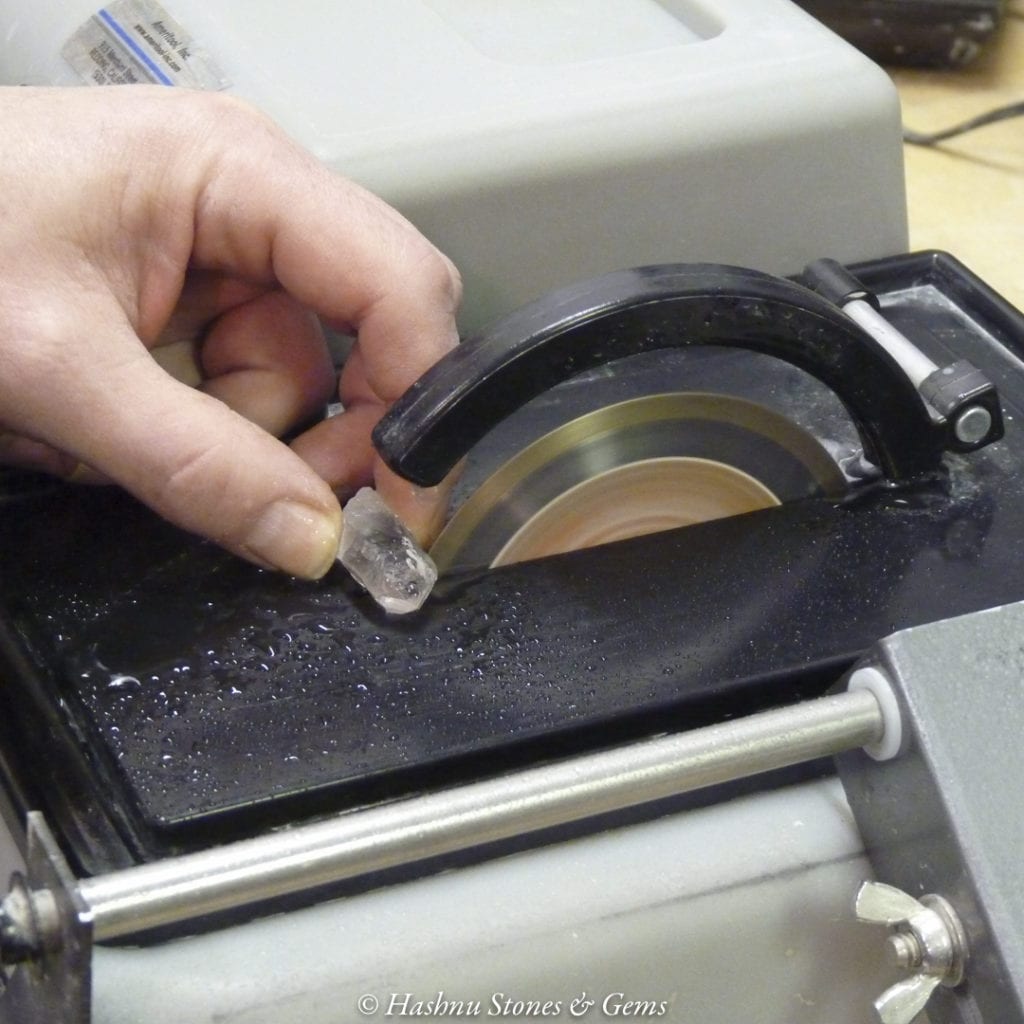 Take full advantage of the discussions you can have with your custom jewelry designer and precision faceter. They will give your gemstone careful consideration far beyond what factory-cut stones will ever receive. The time you take in the gem design stage will ensure your finished gemstone will be a unique piece and a special part of your individual story.

Video of All Story Stones Dopped and Ready to Be Faceted from Ganoksin on Vimeo.

Above, you’ve seen the designs my clients selected for the rhodolite garnet and aquamarine story gems. Here are the gem designs chosen for the other gemstones. Watch their stories unfold in the coming articles in this series. 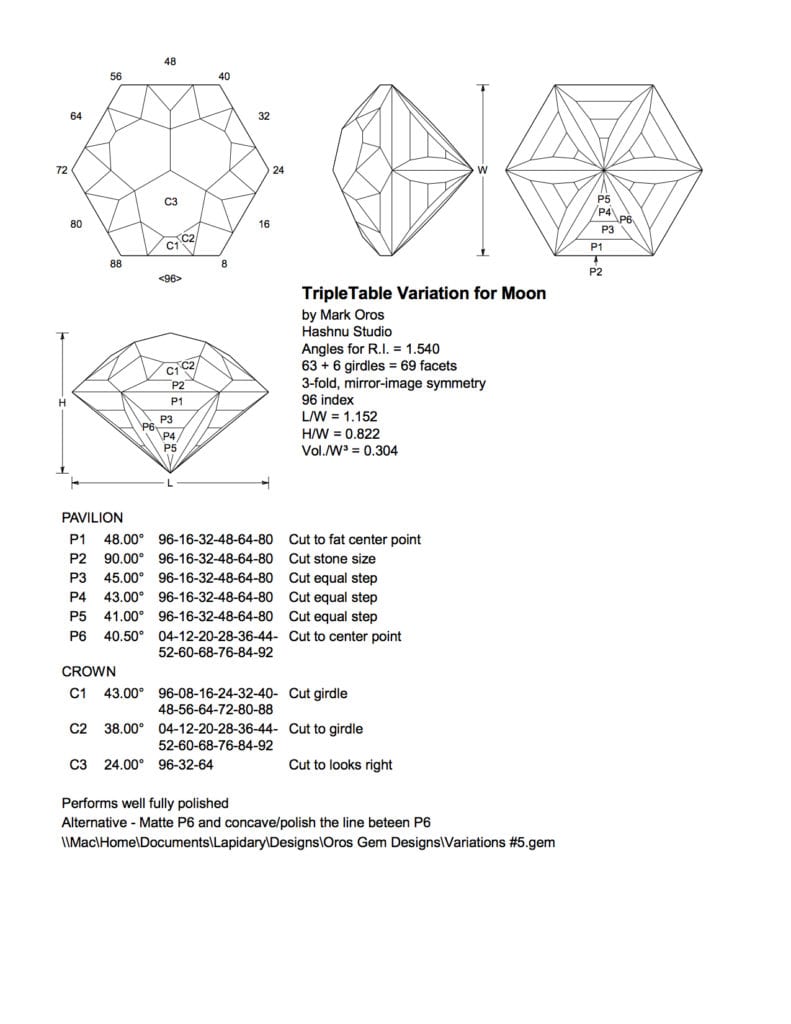 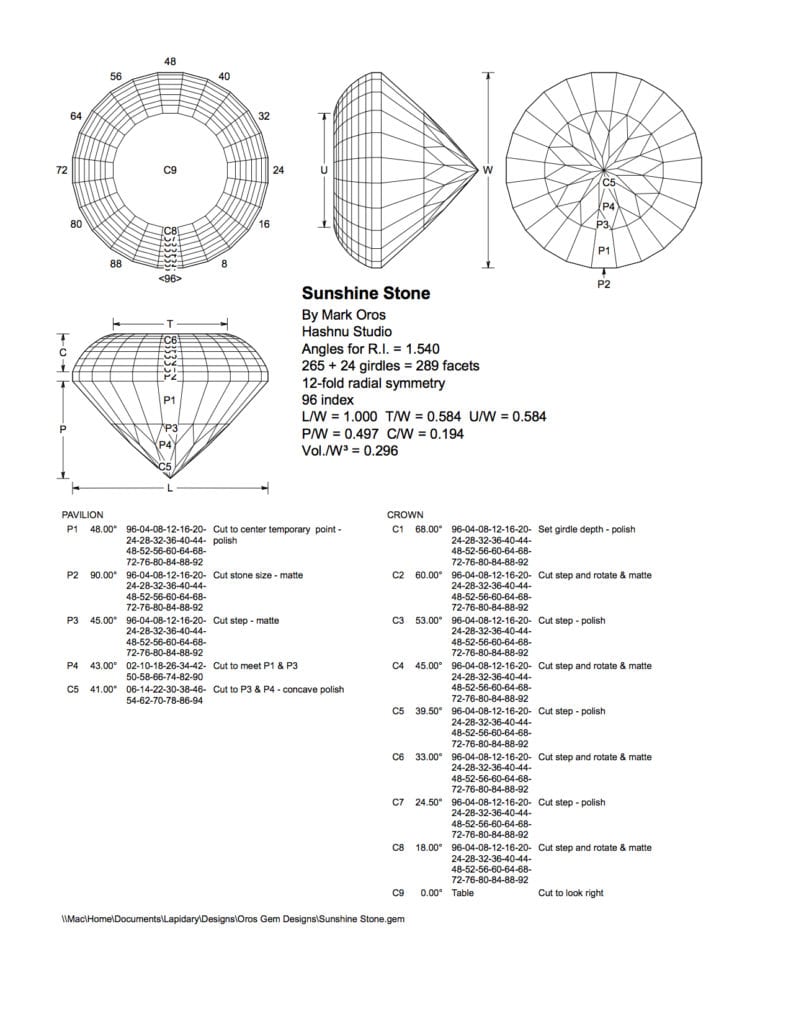 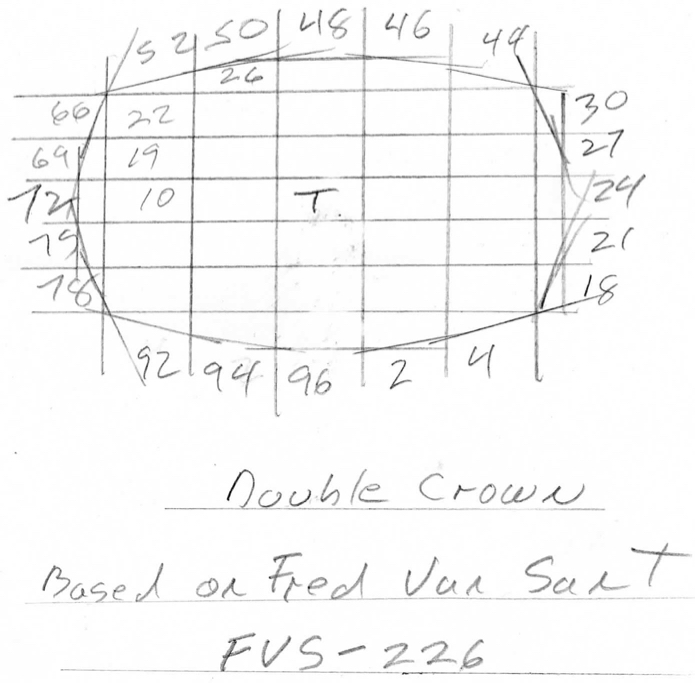 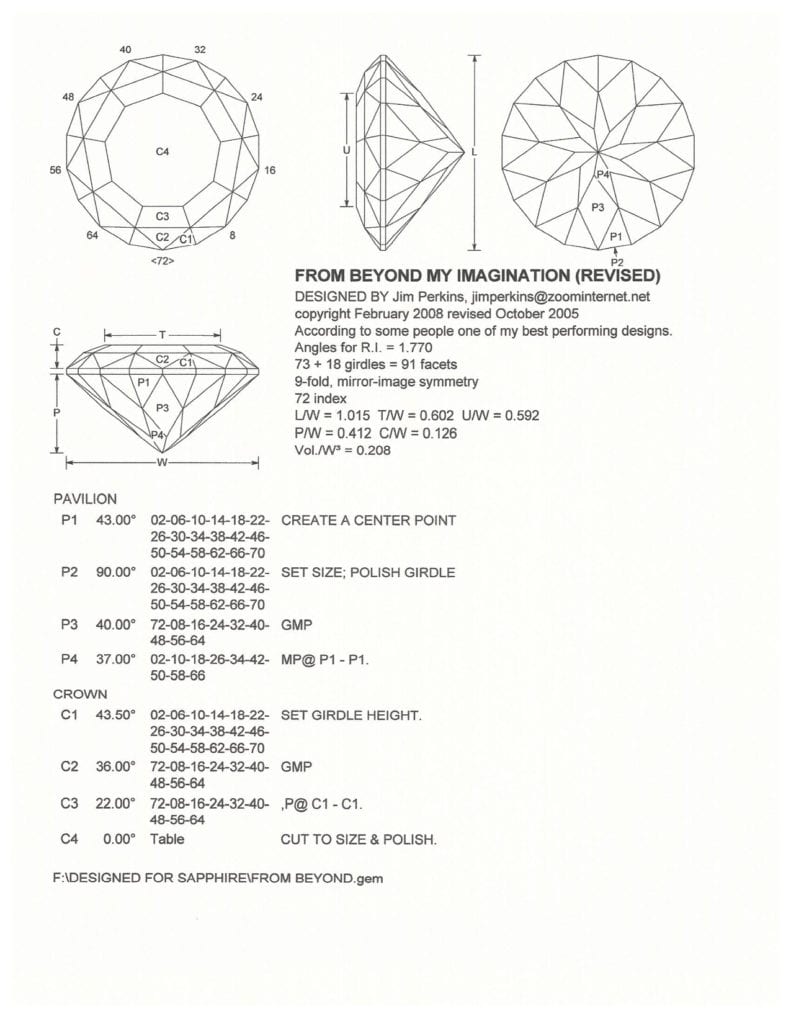 “From Beyond My Imagination (Revised)” by Jim Perkins, selected for the sapphire. Image © Hashnu Stones & Gems. Used with permission.

At Hashnu Stones & Gems, we work and play with some of nature's finest creations, gem stones, opals, agates, jaspers, and fossils. We custom facet and carve a great variety of materials for our patrons, collectors, jewelers, artists and our friends. We also provide fellow lapidarists with facet-grade quality rough material for their own creations. 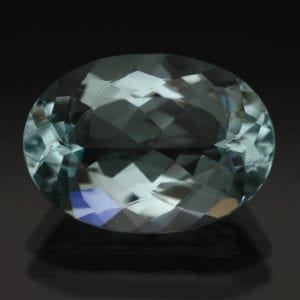 Named after the color of sea water, aquamarine is the blue to blue-green member of the beryl family. Readily available and moderately priced, the…

Aquamarines are fairly tough jewelry stones, but they do have some weaknesses. Learn about aquamarine durability and what precautions you should…

Synthetic aquamarines are relatively rare, but gemologists may encounter them. Learn how these stones are made and how to distinguish them from…

Aquamarines can look great, but what’s the best way to mount them? Novice jewelers should learn the pros and cons of various aquamarine setting…