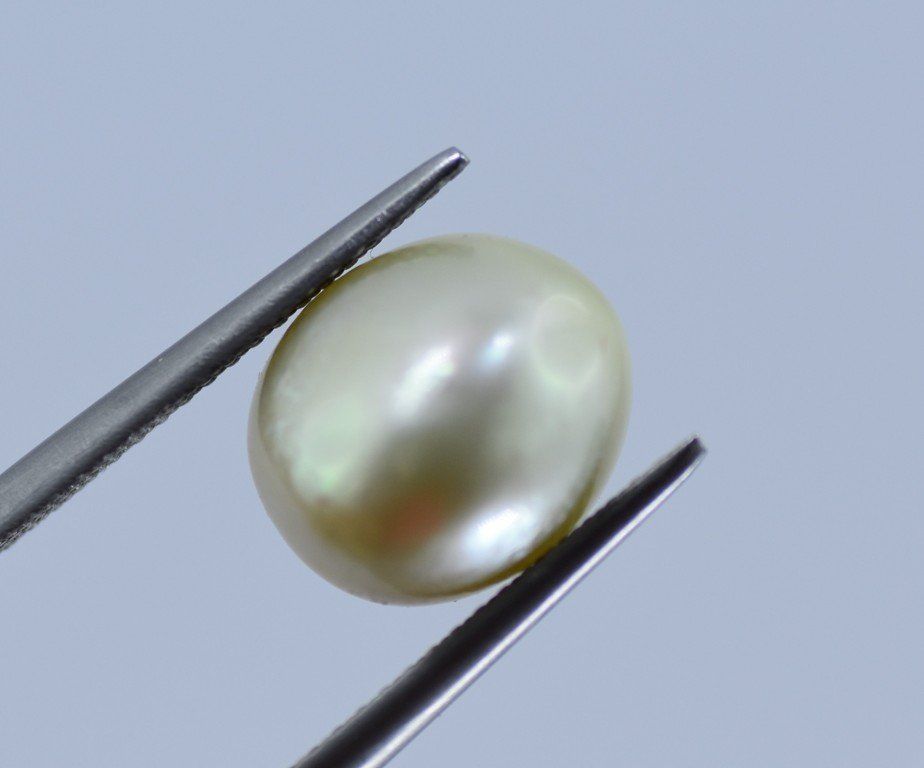 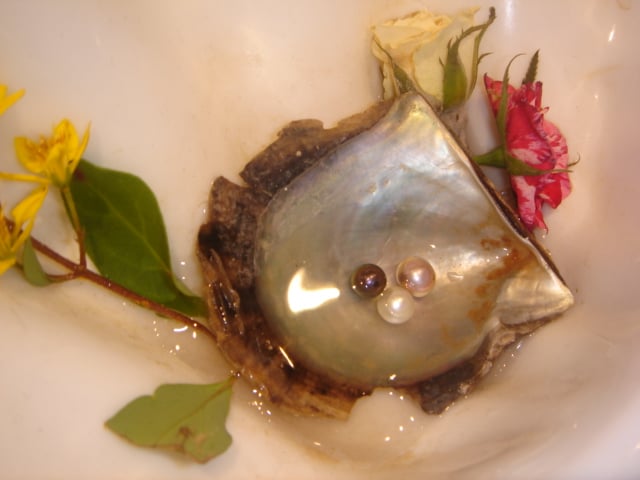 First recorded in history by a Chinese historian in 2,206 BCE, pearls have been valued as gemstones for millennia. However, there’s a major difference between pearls and other well-known gems like diamonds, emeralds, rubies, and sapphires. While these others form as minerals underground, pearls have organic origins. They form within various species of freshwater and saltwater mollusks. Simply put, pearls are gems but not stones. However, the ancients made little distinction between pearls and actual stones.

The Moon, Water, and Pearl Symbolism

Not surprisingly, many cultures have made lunar associations with pearls. These connections are further reinforced by the Moon’s association with the watery domain where pearls are born. 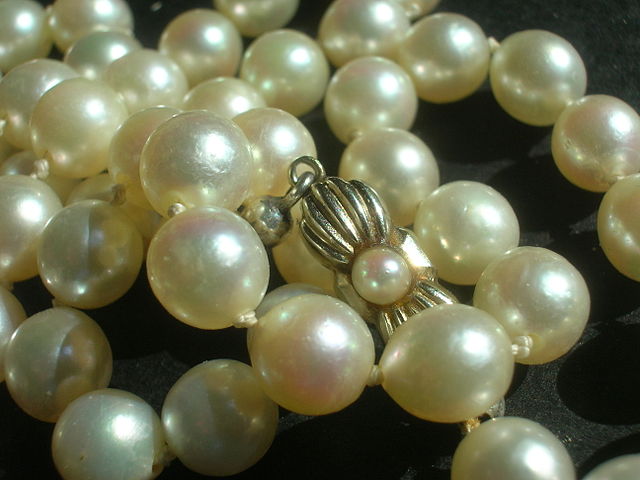 In ancient Vedic texts, the pearl is born of the Earth’s waters and the heaven’s powers, fertilized by a flash of lightning. It’s considered to be the daughter of the Moon. In Western cultures, the pearl has astrological associations with the planet Venus. Like pearls, the goddess of love came from the sea.

Due to their shape, pearls have another watery association. Some stories say white pearls are tears shed by the gods. One legend says the tears Eve cried when she was banished from Eden turned to pearls. 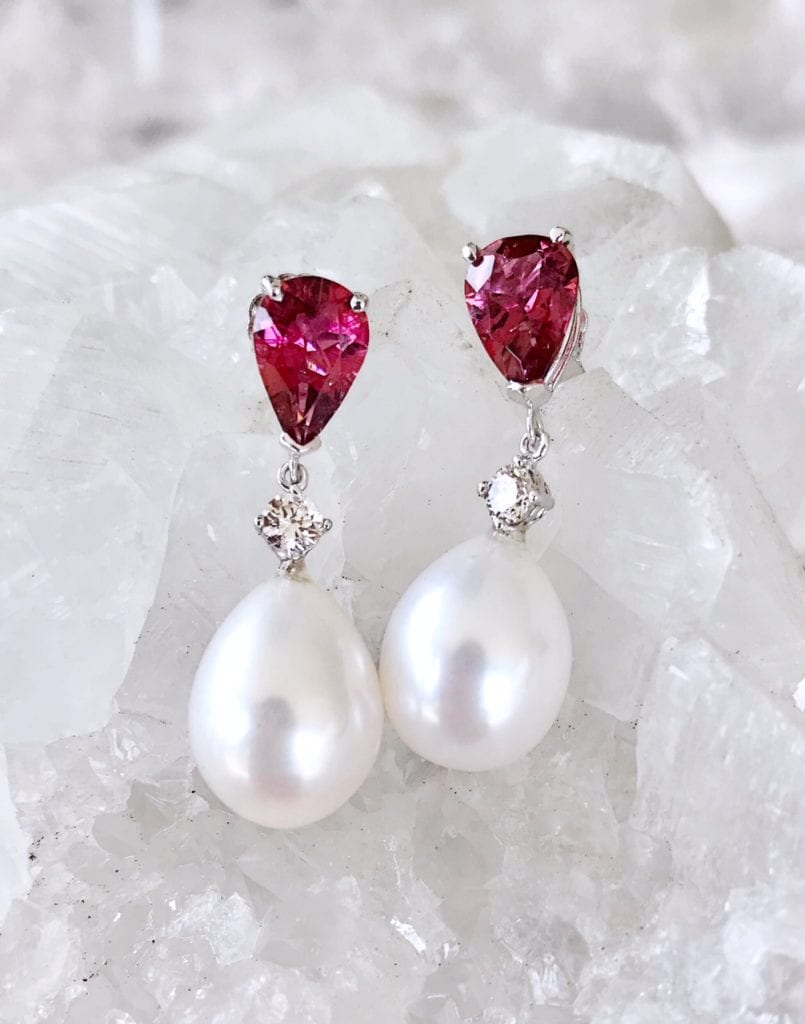 Today, natural pearls are extremely rare, which increases their value considerably. The search for the perfect pearl, whether natural or farmed, has gone on for centuries. In fact, evidence of pearl cultivation goes back to at least the 13th century CE. In ancient times, the expense of perfect pearls gave rise to a curious spell for increasing wealth. The caster would select a particularly fine pearl, infuse it with the desire for riches, and then throw it away into a rubbish heap. The idea behind this sympathetic magic practice was that someone who could throw away pearls was rich indeed.

The rarity and expense of pearls also contributed to some common expressions still used today. In The Bible, Matthew 7:6 admonishes against throwing “pearls before swine,” wasting what is valuable on fruitless endeavors. We still commonly refer to precious advice and counsel as “pearls of wisdom.” In the millennia before perliculture, pearls were very hard to find and harvest. When wisdom is given, treasure it like a rare pearl. 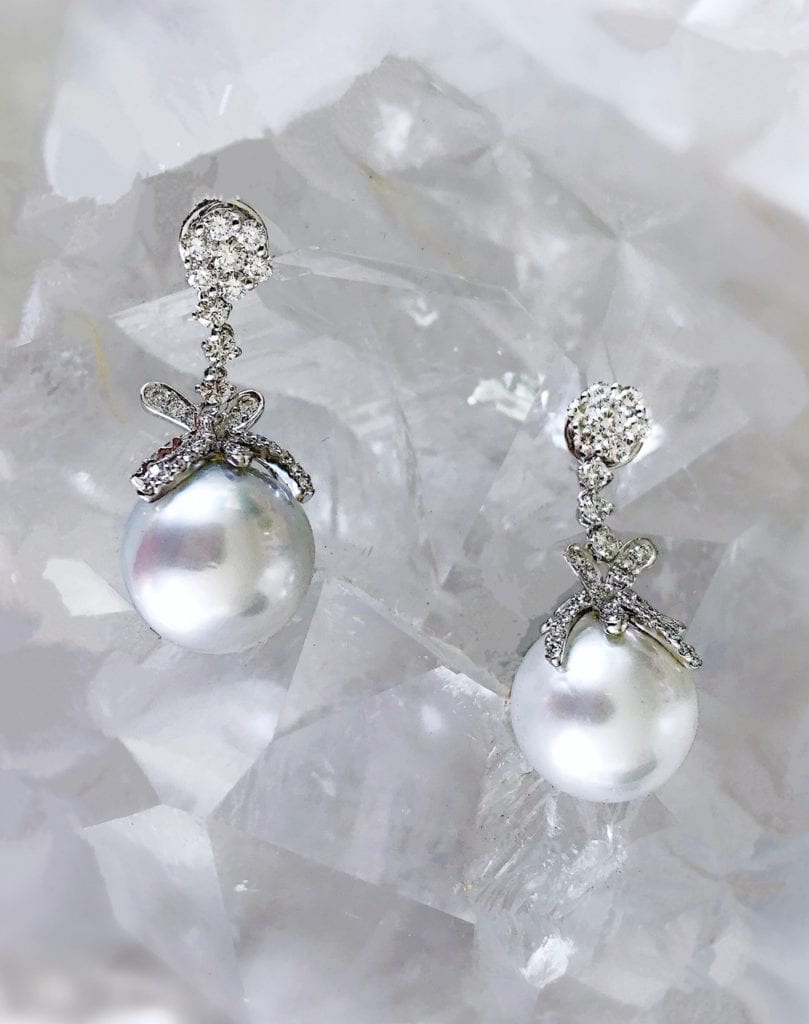 Pearl’s associations with the Moon and Venus seem to reinforce the popular perception that it’s a feminine jewel. The mineralogist George Kunz, in his 1913 work, The Curious Lore of Precious Stones, made this comparison between diamond and pearl:

The diamond is to the pearl as the sun is to the moon, and we might well call one the “king-gem” and the other the “queen-gem.” The diamond, like a knight of old — brilliant and resistant, is the emblem of fearlessness and invincibility; the pearl, like a lady of old — pure and fair to look upon, is the emblem of modesty and purity. 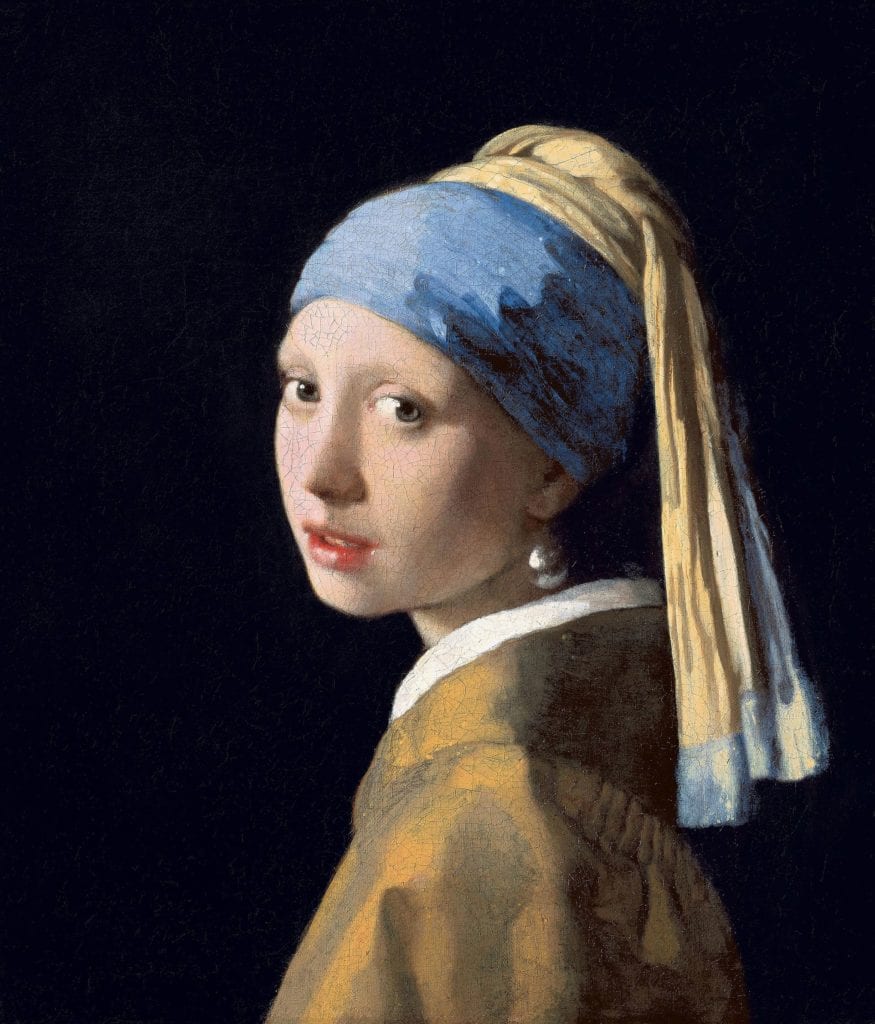 This celebrated 1665 painting by Johannes Vermeer, Girl with a Pearl Earring, has inspired a novel, a play, and a film. From the collection of the Mauritshuis, The Hague, Netherlands. Public Domain.

This idea isn’t limited to chivalric notions from over a hundred years ago. Western cultures still commonly associate the color white with innocence and purity, which in turn is associated with weddings. As white gems, pearls remain popular gifts for brides. (It’s even said pearls can keep newlywed brides from crying). Furthermore, as the traditional June birthstone in Western cultures, pearls have another popular link with the idealized month for weddings and brides. Brides in Asia also wear pearl necklaces as symbols of fertility.

The Gem of Kings

Even today, despite concerted marketing efforts, pearls are worn commonly by women but rarely by men. However, keep in mind that although this association of pearls with particular ideas of femininity is strongly engrained in our cultural psyche, it wasn’t always so and need not be. In ancient times, kings wore ropes of pearls as a mark of wealth. 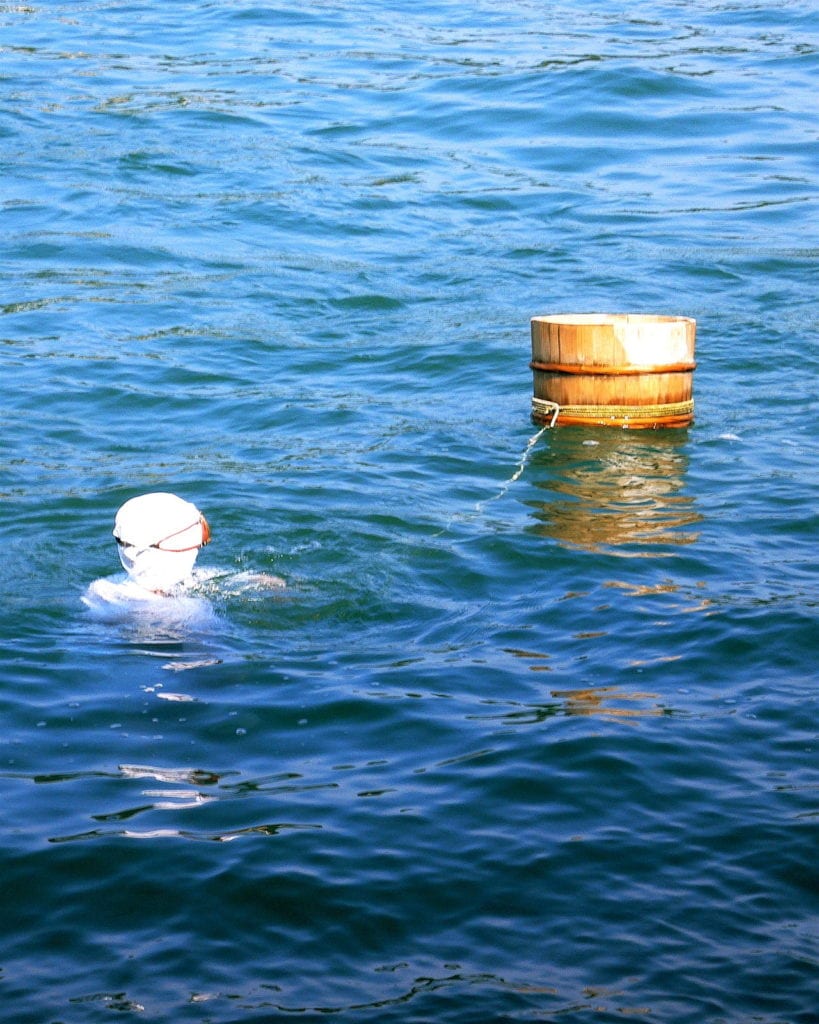 Ama, Japanese for “sea person,” are Japanese female pearl divers. They dive without scuba gear. When Mikimoto Kokichi began to cultivate Akoya pearls in the 1920s, these women were crucial to his success. Photo by ジェームズ  ディズレー. Licensed under CC By-SA 2.0.

Few gems are as varied in shape and color as pearls. Thus, it’s not surprising that pearls of colors other than white have also inspired legends.

According to Polynesian lore, the god Lono came down on a rainbow to a princess, carrying black pearls with him as gifts. The black pearls, with their beautiful iridescence, were imbued with the colors of the rainbow. 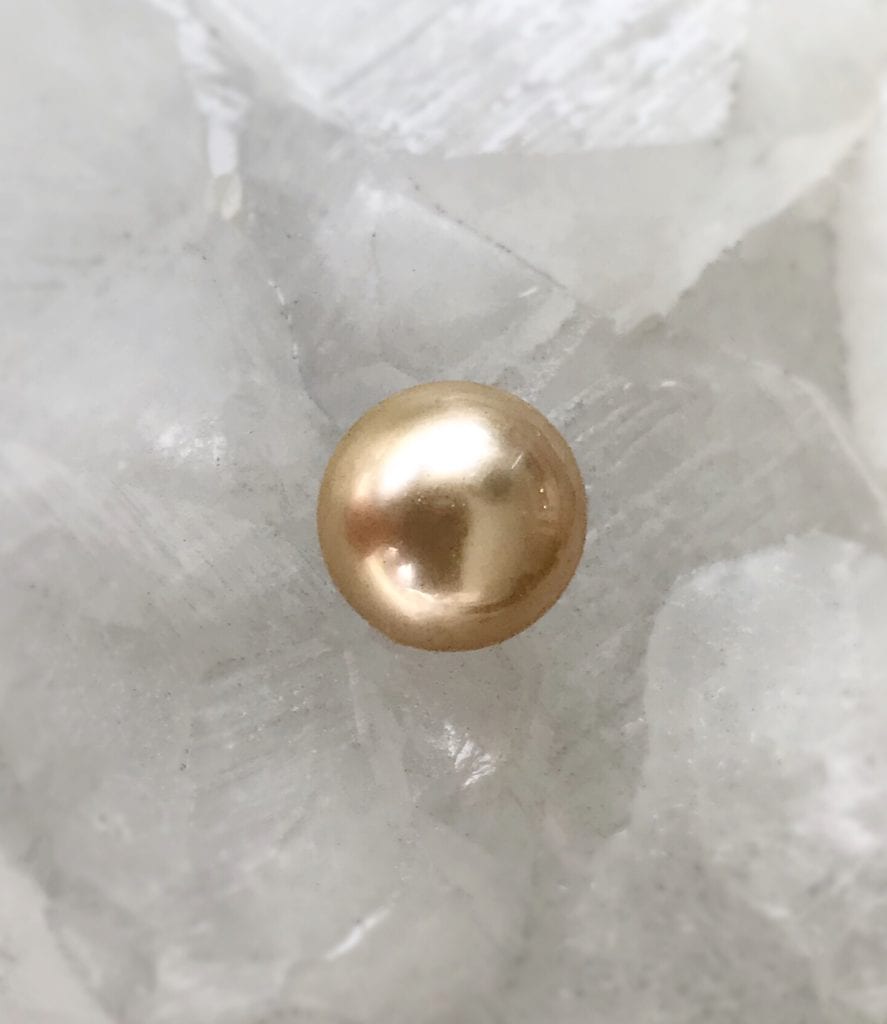 One early Chinese myth related that pearls fell from the sky when dragons fought amongst the clouds. Another myth states that pearls originated as raindrops swallowed by oysters. In one ancient tale, a boy found a miraculous pearl. When placed in a jar with just a bit of rice, it filled the jar with rice the next day. After his neighbors discovered this, they tried to steal it. The boy swallowed the pearl to protect it. As a result, he became a dragon. 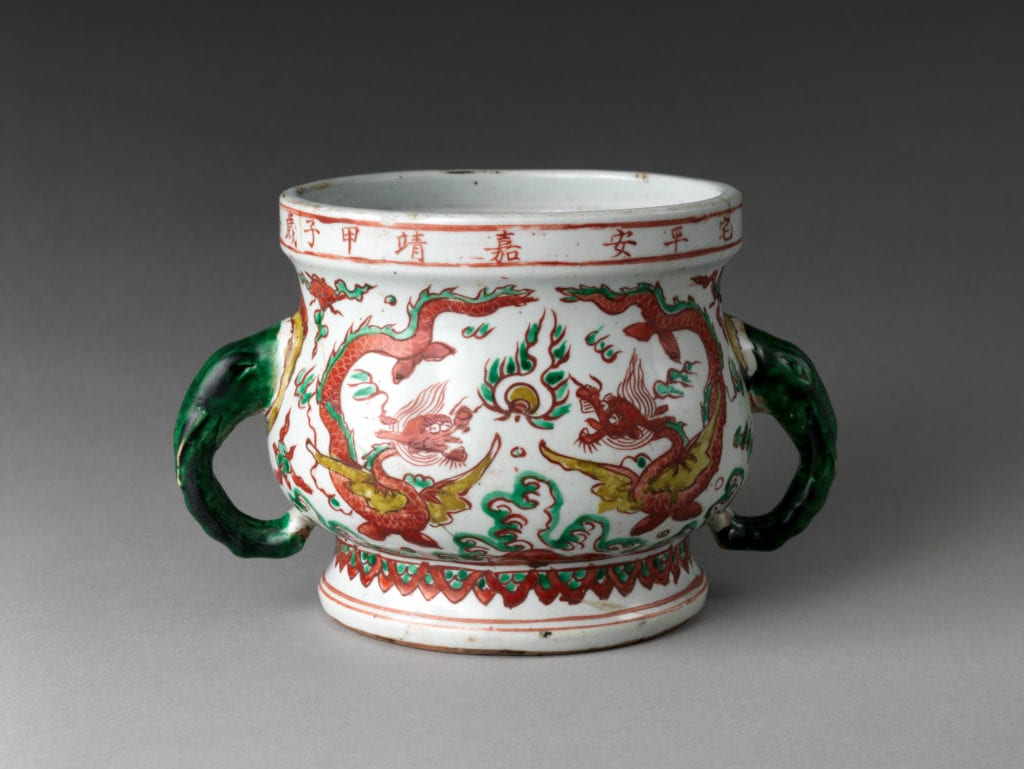 This porcelain incense burner depicts dragons chasing a pearl. The Wu family offered this item to the Temple of the Lord of the Black Heaven for the protection of their home. China, Ming Dynasty, 1564 CE, 26.7 cm diameter. Gift of Stanley Herzman, in memory of Gladys Herzman, 1997. Metropolitan Museum of Art, New York. Public Domain.

Pearl Symbolism and the Soul’s Journey

In many ancient Asian cultures, the smooth wholeness and seemingly “magical” appearance of pearls in such lowly lifeforms as oysters indicated the presence of divinity. The pearl represented the journey of the soul or spirit along the path to perfection. In ancient burials, mourners placed pearls in the mouths of the deceased. Since pearls apparently contained the principles of life, they hoped they could assist the dead on their journeys beyond. Mourners also decorated burial gifts and clothes with pearls. This seemingly ritual act may have started as a practical act. Pearls were among the first materials used for beads. Their natural bead-like shape made them easy to use for decoration and yielded lovely results. 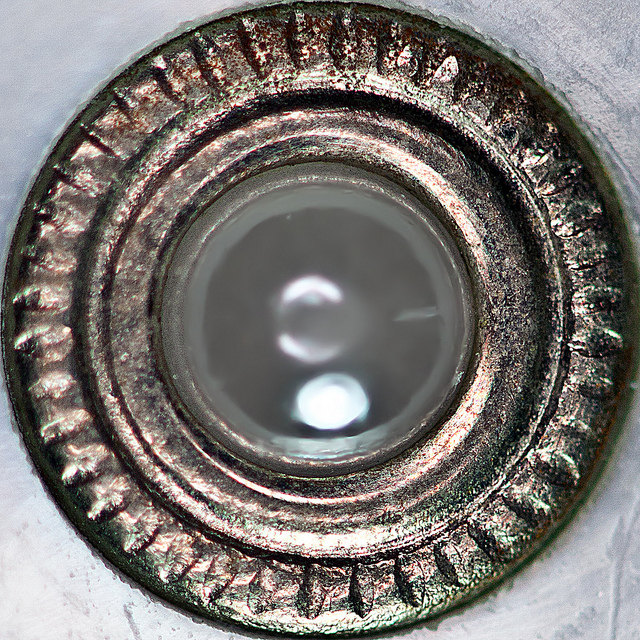 Pearl and silver cufflink. Photo by Mark Morgan. Licensed under CC By 2.0.

The violence associated with removing pearls from their natural abode (living creatures) has given them a reputation as unlucky. However, most of the superstitions surrounding the unluckiness of pearls go back to the ideal of their purity. Any pearl jewelry with malice or jealousy in its past builds a reputation for bringing bad luck to those sharing the same traits. If given in love with a pure heart, a pearl always symbolizes purity, fertility, and the cycles of life. 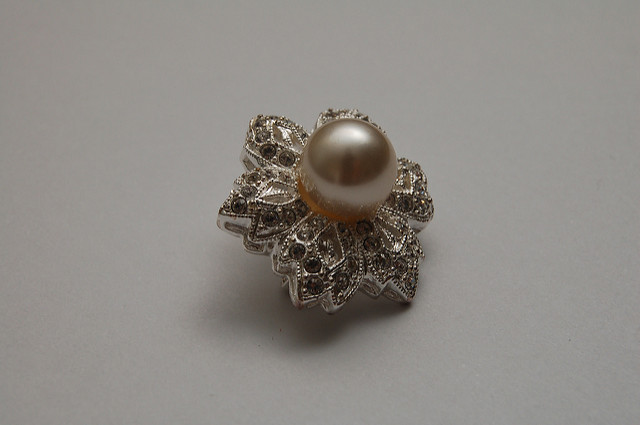 “Pearl Flower,” photo by sonictk. Licensed under CC By 2.0. 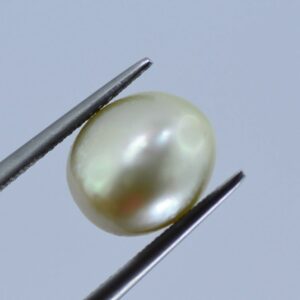 Pearls are the only gems found within living creatures, both salt and freshwater mollusks. However, most pearls on the market today are cultivated,… 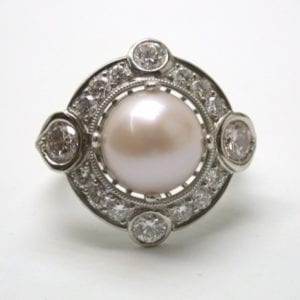 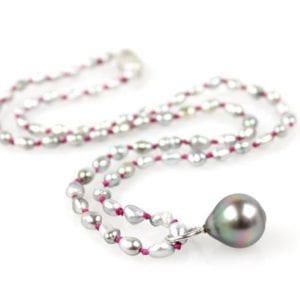 Not all pearls are perfectly round and white. Learn about keshi pearls and soufflé pearls, two beautiful byproducts of the cultured pearl industry.… 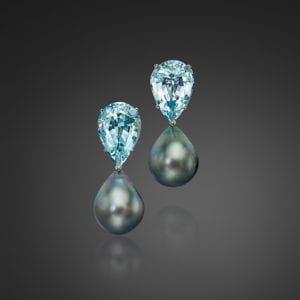 With dark bodies and colorful sheens, beautiful Tahitian pearls have mesmerized jewelry lovers for decades. Learn more about these and other… 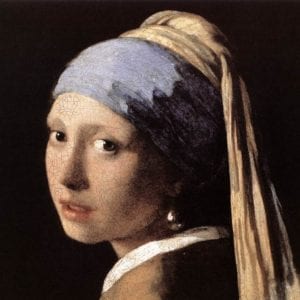 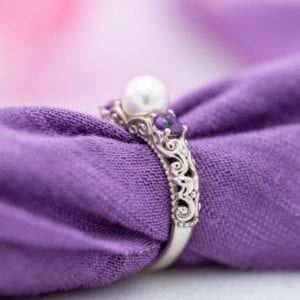