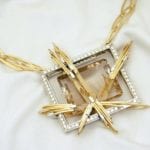 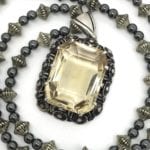 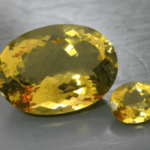 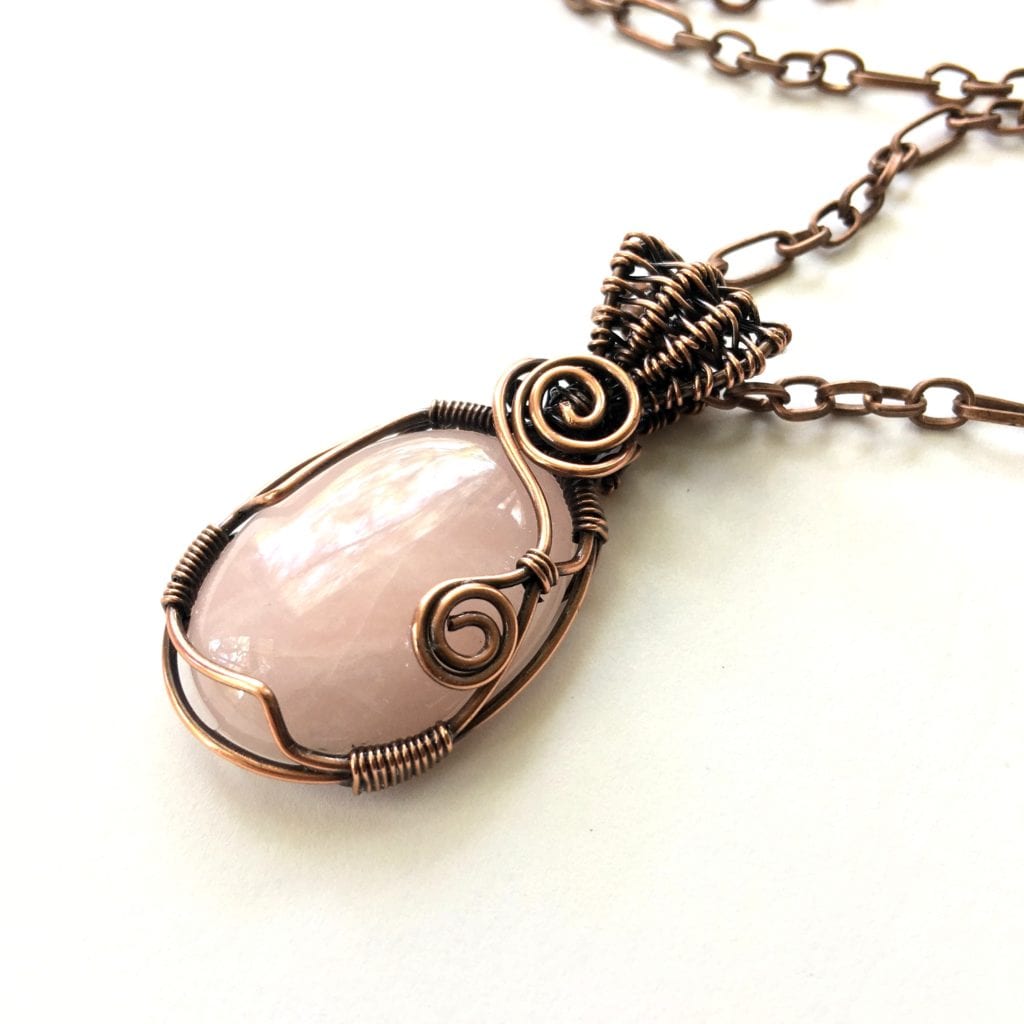 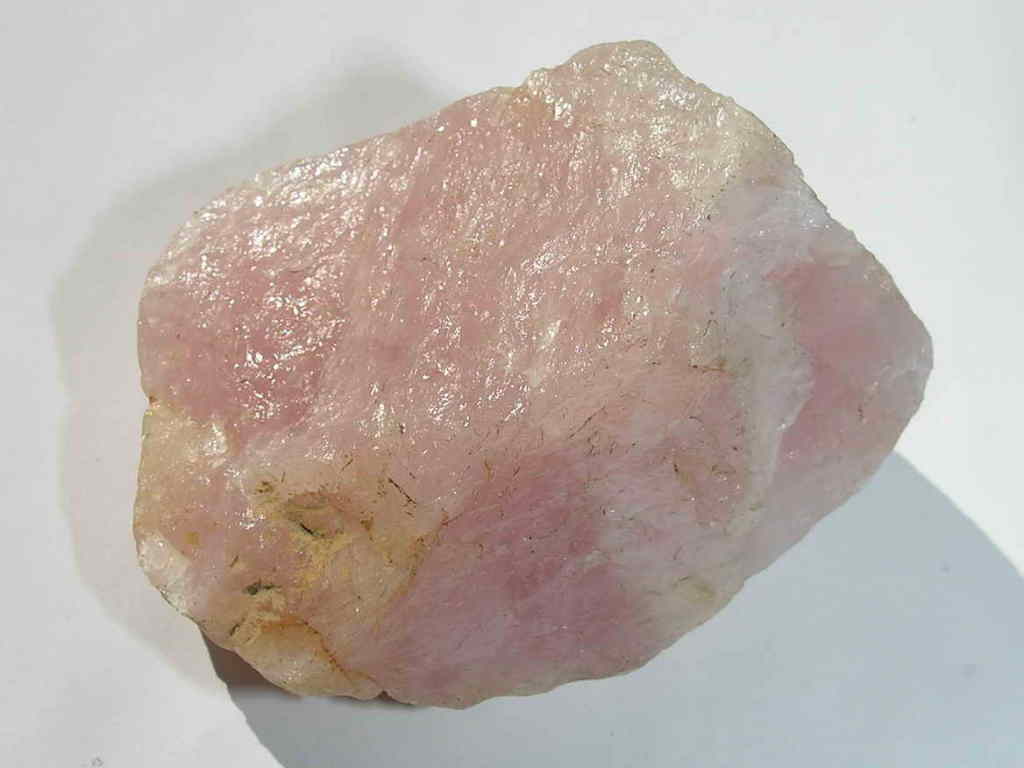 What is Rose Quartz?

Rose quartzes are quartzes that show a light to medium pink color. These gems receive their coloring from fibrous inclusions of a mineral similar to dumortierite. Sometimes, amethyst (the purple variety of quartz) may influence rose quartzes and give them a violet or purplish shade.

Rose quartz has a hardness of 7 and no cleavage, which make it an excellent choice for any type of jewelry use. This quartz variety has long been known as an opaque to translucent gem material. Indeed, it remains a popular choice for spheres, beads, decorative objects, and other types of carvings as well as cabochons. 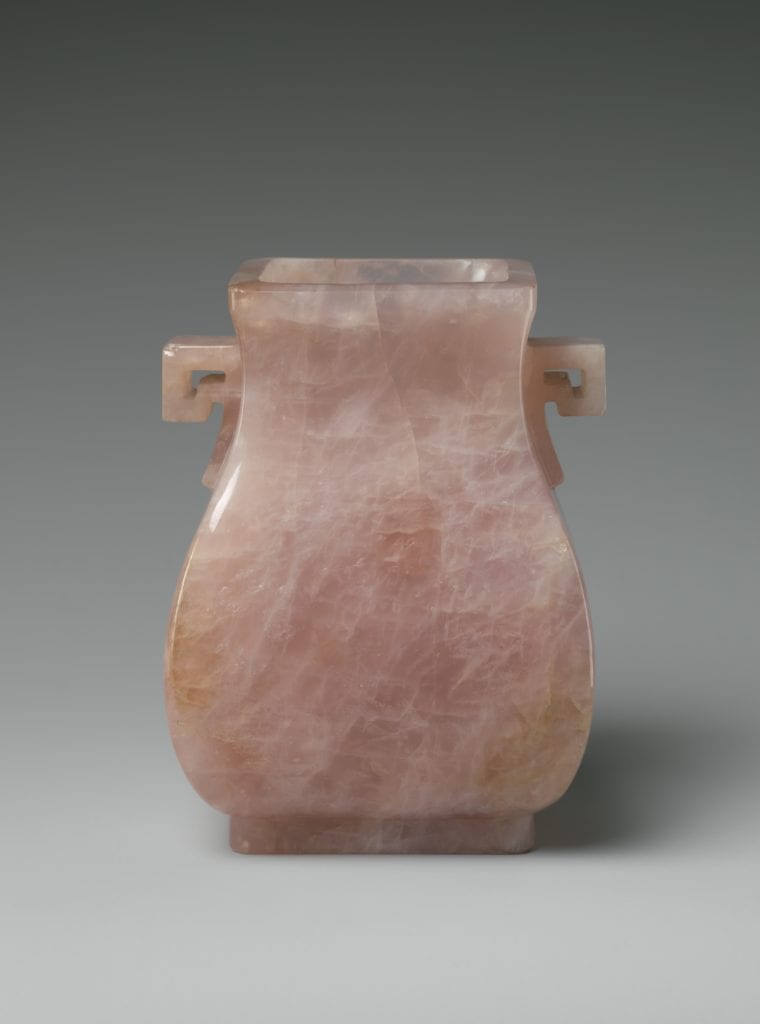 In the 1980s, transparent material was discovered in Madagascar. As a result, faceted rose quartzes entered the jewelry stone market. 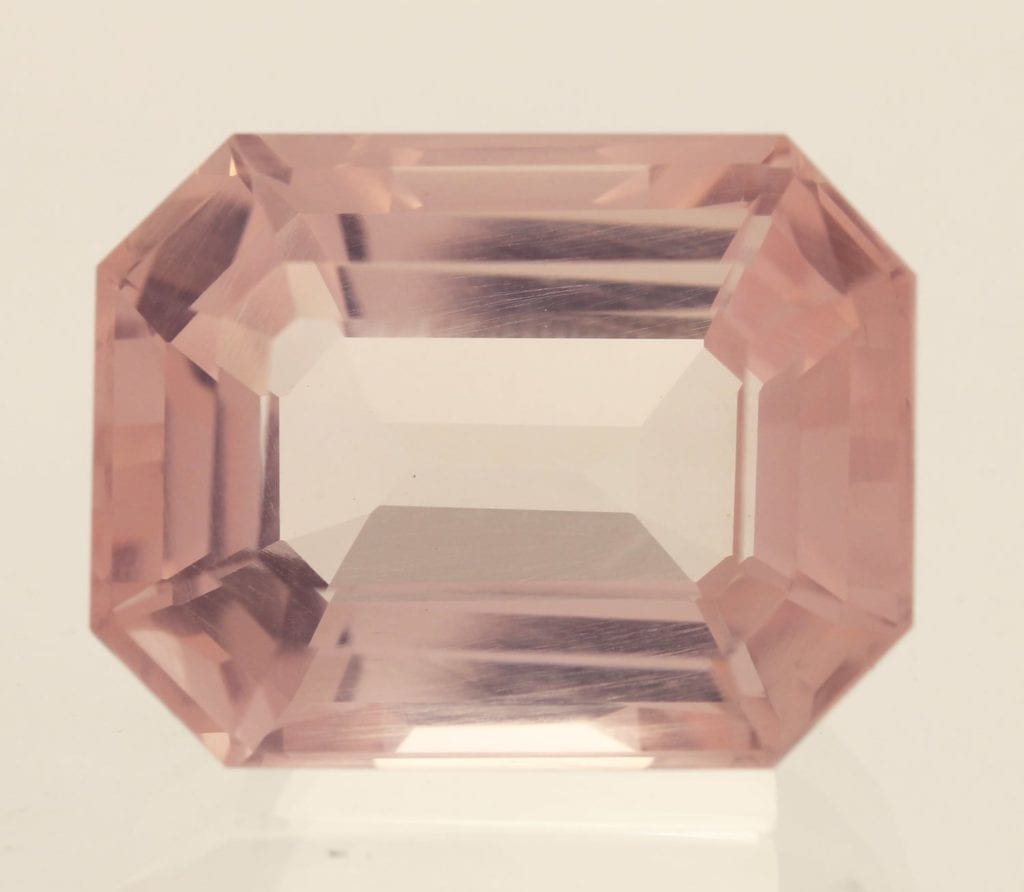 With romantic associations due to its color as well as good durability, rose quartzes can make beautiful and affordable engagement ring stones. Rose quartzes are also considered gemstone options for 2nd and 5th wedding anniversary gifts.

Asterism, or the “star stone” effect, occurs rarely in quartz but is especially striking in rose quartzes. Since these gems may contain microscopic inclusions of rutile needles, cabs can sometimes show a six-rayed star when properly cut. Some cabs may display chatoyancy, a “cat’s eye” effect. 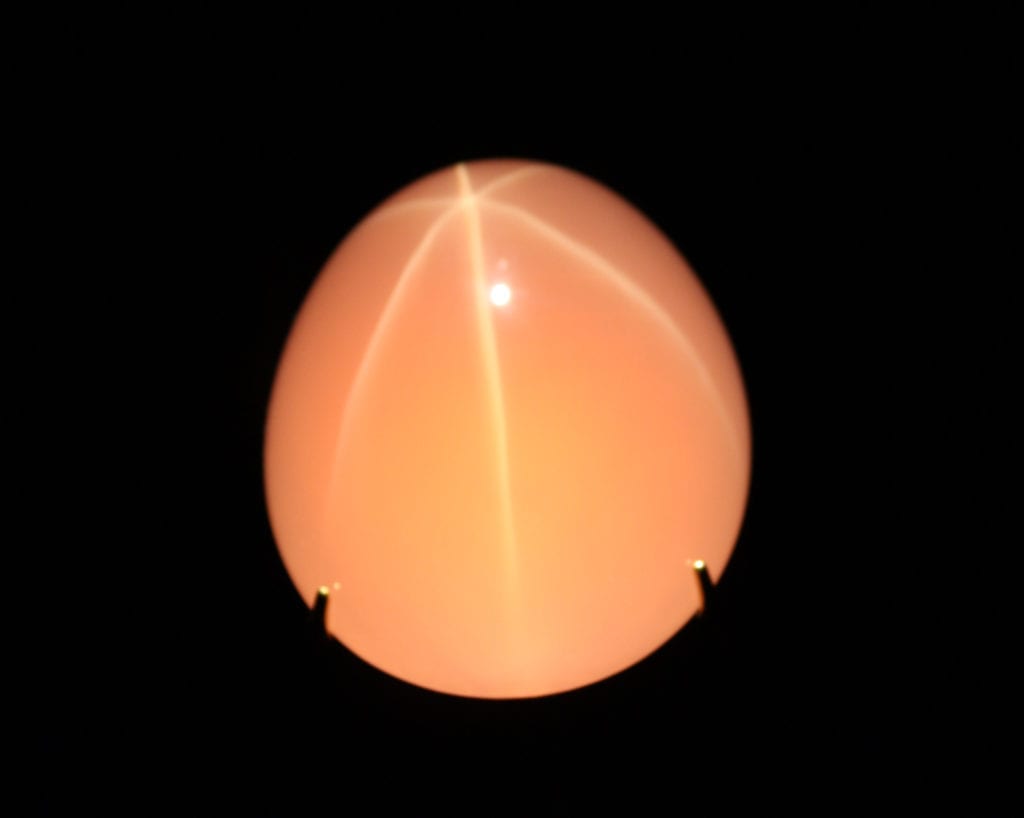 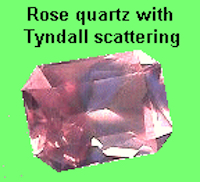 Rose quartzes may also display another phenomenal effect, Tyndall scattering, which occurs very rarely in gemstones. Fine particles of the appropriate size suspended in a medium can make light appear blue. While dust in the air makes the daytime sky blue, inclusions in some rose quartzes can turn all or part of the gem blue, when light strikes at the proper angle. This rare effect appears relatively frequently in Madagascar material.

Rose quartz may share its color with some other very popular gemstones, but its specific gravity (2.651) and refractive index range (1.544-1.553) can help readily distinguish it from pink varieties of sapphire, spinel, tourmaline, and topaz, as well as the more rarely encountered kunzite.

Be aware that rose quartzes are sometimes sold under the misleading names of “American Ruby” or “Bohemian Ruby.” Of course, quartz and ruby (corundum) are distinct gem species.

What is “Pink Quartz”?

Although rose quartzes receive their pink color from inclusions, researchers have discovered another rarer type of pink quartz that gets its color through a different process. Natural irradiation causes color centers based on aluminum (Al) or phosphorus (P) to replace silicon (Si) in the quartz atom lattice.

Although this quartz is still called “rose quartz,” some researchers have suggested naming it “pink quartz” to distinguish it from the more commonly encountered rose quartz, since it demonstrates some different physical and optical properties. Pink quartzes occur in euhedral or regular, distinct crystal shapes with well-formed faces, whereas rose quartzes occur in anhedral or irregular, intergrown crystal shapes with less distinct faces. Pink quartz may also show greater transparency.

Most significantly for jewelry use or display, pink quartzes have significant sensitivity to ultraviolet (UV) light. They can lose their color rapidly under exposure. Irradiation can restore the color.

In contrast, the more common rose quartzes don’t have this sensitivity.

The crystal specimen in this rough and cut set features transparent, well-formed hexagonal shapes. It may belong to the rarer variety some refer to as “pink quartz.” The faceted gem, on the other hand, has the milky appearance more typical of rose quartz. Crystal, 4.6 x 2.7 x 2.3 cm, Sapucaia Mine, Galileia, Minas Gerais, Brazil; trilliant-cut gem, 6.40 cts, Madagascar. © Rob Lavinsky, www.iRocks.com. Used with permission.

Are There Synthetic Rose Quartzes

Many varieties of quartz can be synthesized in labs. Rose quartzes (more specifically, “pink quartzes”) have been created by adding Al or P to synthetic quartzes and subjecting them to gamma radiation.

Rose quartzes typically receive no treatments or enhancements. However, terminated crystals of rose quartz from Ganga Rosa, near Minas Gerais, Brazil, may turn strawberry red when irradiated. (Most other rose quartzes will turn yellow if irradiated). These quartzes may be the euhedral “pink quartz” variety.

Where are Rose Quartzes Found?

Rose quartz occurs in many locations across the globe. Brazil and Madagascar are the main sources of gem material. (Brazil also produces “pink quartz”). 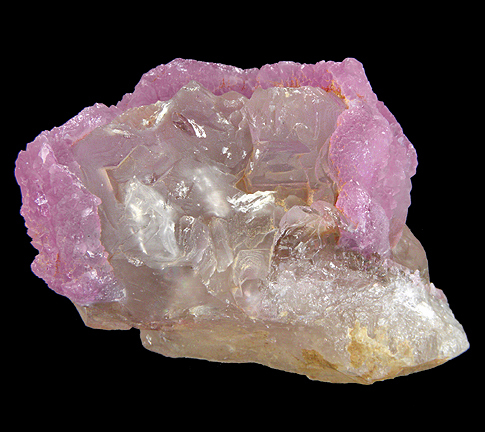 Since rose quartzes often contains inclusions, refrain from cleaning these gems with mechanical systems. Instead, use warm water, detergent, and a soft brush.

Reserve any jewelry made from the euhedral “pink quartz” variety for evening or occasional wear only. Store it in darkness, away from sunlight or other UV light sources, to preserve its color. 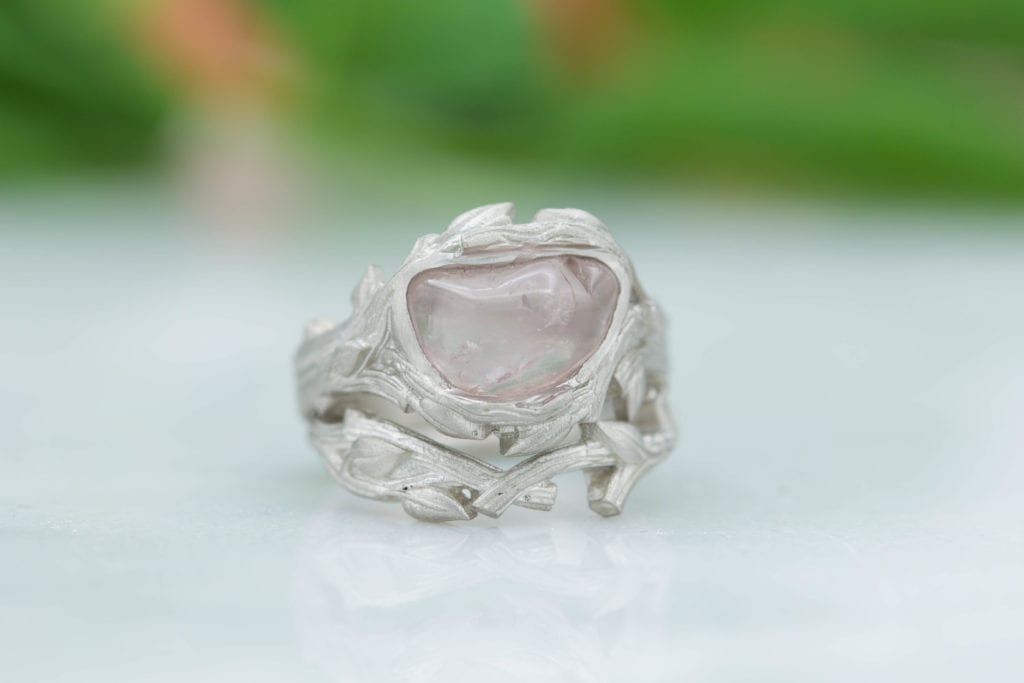 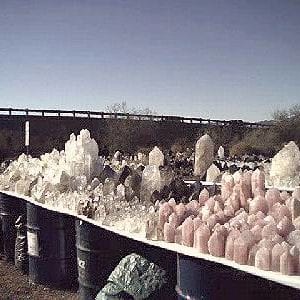 The Quartzsite gem shows attract gemologists and rock hounds from around the world. Learn what to expect and how to shop at these huge annual January… 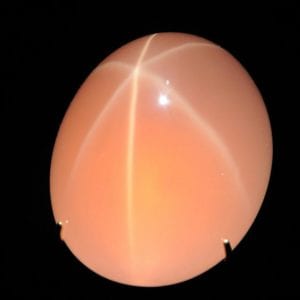