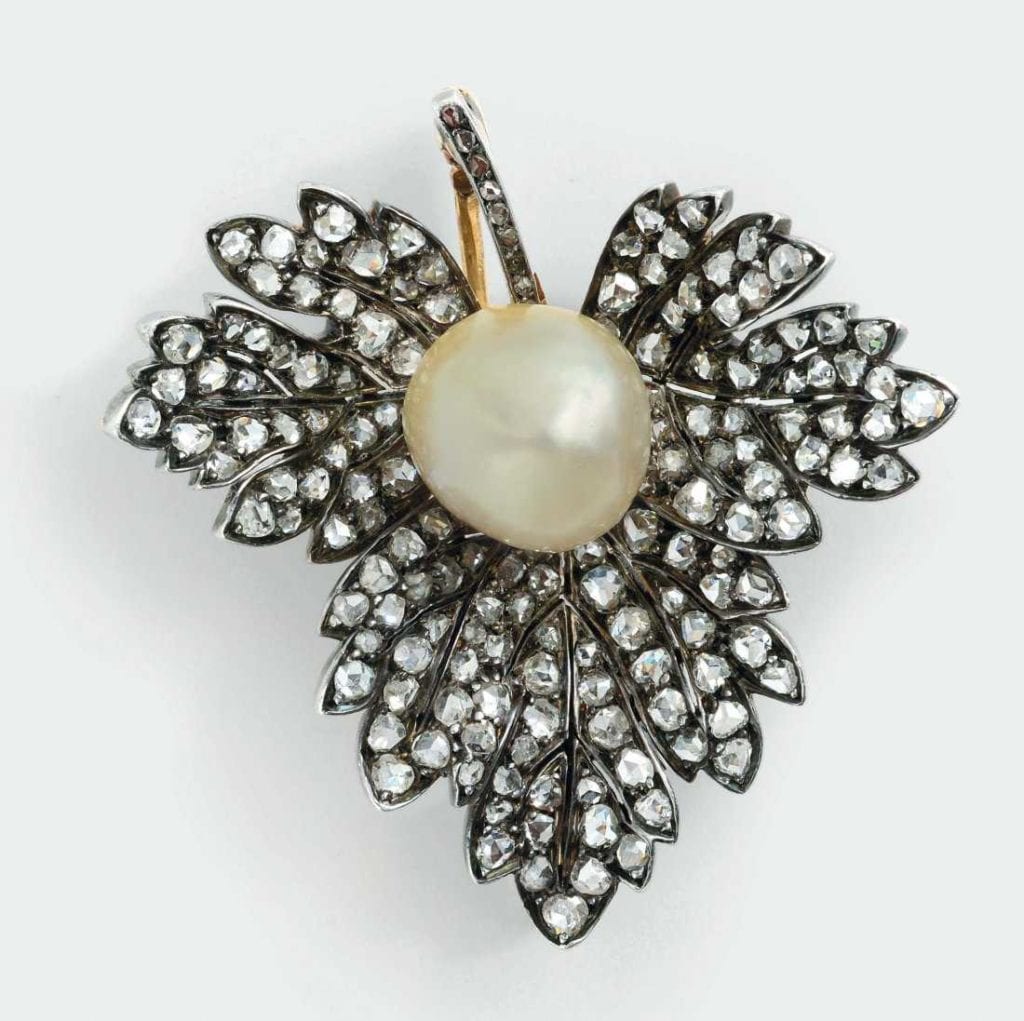 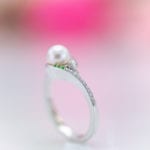 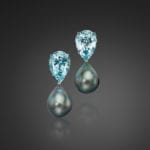 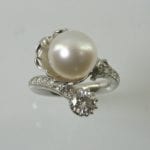 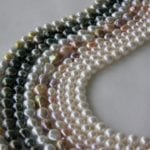 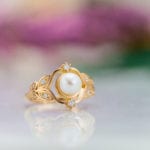 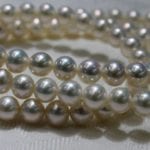 All Sizes
Conch Pearls
to /ct 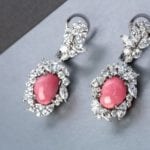 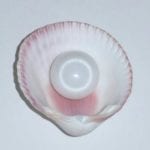 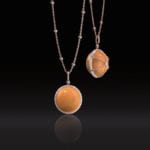 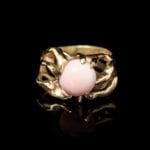 For detailed information on quality factors for saltwater pearls, consult our pearl buying guide as well as our cultured pearl appraisal guide. 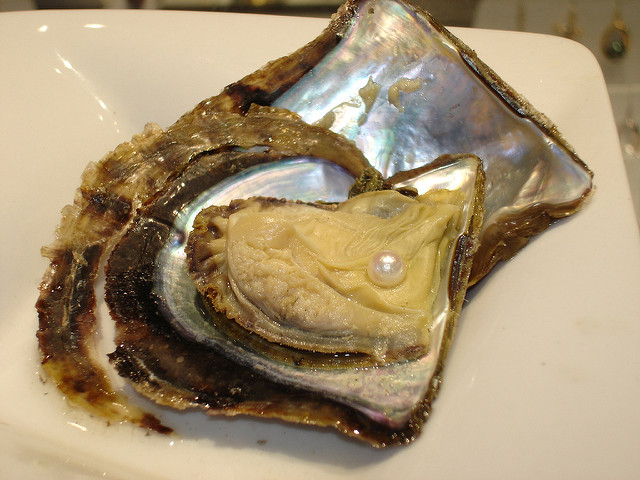 Oyster pearl, Hawaii. Photo by Anna. Licensed under CC By 2.0.

Found in the Atlantic, Indian, and Pacific Oceans, marine oysters from the genus Pinctada are the principal source of saltwater pearls, whether natural or cultured.

Gathering natural pearls is referred to as fishing, hunting, or pearling. Usually, divers gather these mollusks and remove the organic gems inside. Unfortunately, few wild Pinctada oysters yield pearls. (This is especially unfortunate for the oyster, which dies when taken from its home and opened in this fashion, pearl or no pearl).

For thousands of years, saltwater pearls have been highly prized for jewelry. The demand remains strong, though now it’s met almost exclusively through cultivation. 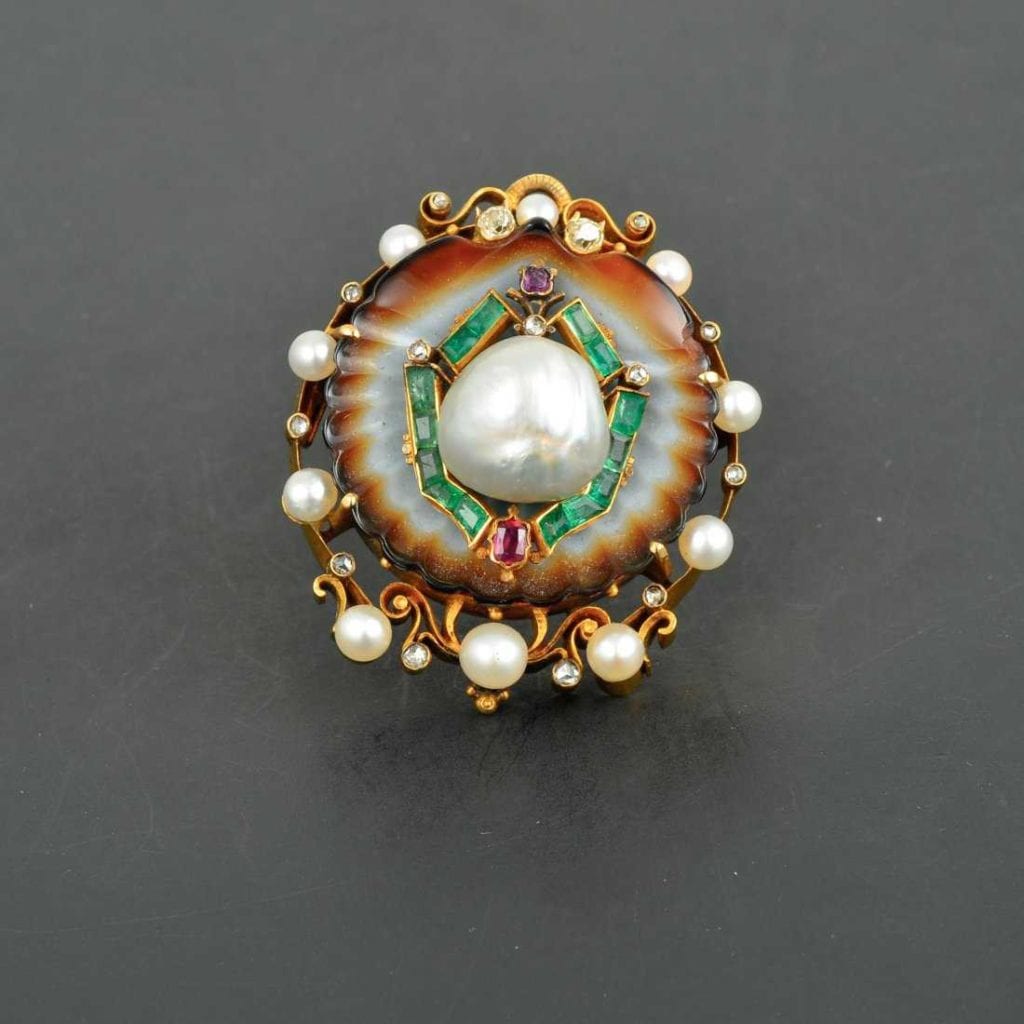 This Victorian 18k yellow gold brooch features a pear-shaped, natural saltwater pearl center stone surrounded by 2 rubies, 14 emeralds, 10 round pearls, and 15 rose-cut diamonds. The saltwater pearl is set on an agate carved like a clam shell. (The brooch also has a compartment that holds a lock of hair). Photo courtesy of liveauctioneers.com and SAJ Auction.

What’s the Difference Between Freshwater and Saltwater Pearls?

Although freshwater and saltwater pearls develop in different varieties of mollusks, they still form in the same manner. An irritant trapped in an oyster or other mollusk stimulates the production of nacre and the formation of the pearl.

Although both varieties share most of their chemical and physical properties, the marine specimens have historically set the standard of beauty for the appearance of all pearls. Natural freshwater pearls usually have more irregular shapes and poorer luster. However, with improved cultivation techniques, farmed freshwater pearls can now match their saltwater brethren in appearance.

Saltwater pearls have set the traditional standard for the round white pearl. However, natural pearls of any kind very rarely occur in perfectly round shapes. The natural saltwater pearls in this old European-cut diamond ring are notably off-round and somewhat asymmetrical when viewed from the side and bottom. Photo courtesy of liveauctioneers.com and Fellows.

Natural pearls may be inert to strong light blue, yellowish, greenish, or pinkish in both longwave (LW) and shortwave (SW) ultraviolet light (UV). Cultured pearls may have no reaction or the same reaction as naturals in LW.

Natural black pearls may be weak to moderate red, orangish red, or brownish red in LW.

Dyed black pearls may show variable reactions under LW but never the same as natural.

La Paz or Sea of Cortez pearls have a strong red reaction in LW.

For more information on pearl cultivation techniques, see our article on natural versus cultured pearls.

Grown in Pinctada fucata or Akoya oysters, Akoya pearls are the traditional cultured saltwater pearls. Raised primarily in Japan and China, their sizes typically range from 5 mm to 11 mm, though most are 5 mm to 7 mm in length. Usually, they have a white to cream body color but can occur in several other colors as well. If that weren’t enough, dyeing can turn Akoya pearls into any imaginable color. Unfortunately, pollution and illness have greatly impacted Japanese saltwater farms. 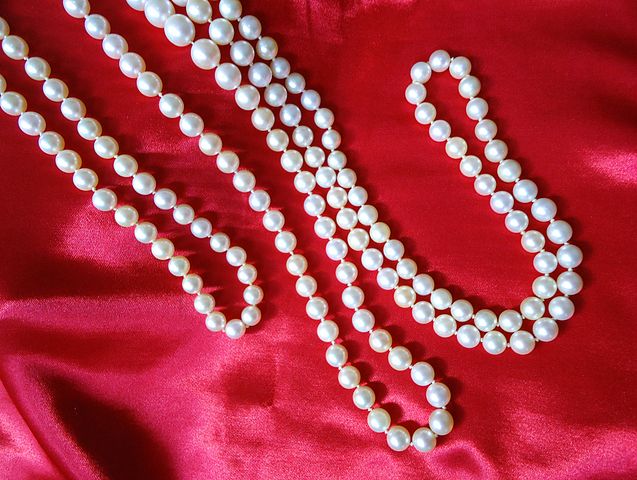 South Sea cultured pearls are grown in silver-lipped and gold-lipped Pinctada maxima oysters. Farms are found throughout the Indian and Pacific oceans, around Australia, Indonesia, Myanmar, and the Philippines. Larger than Akoyas, these pearls are usually 8 mm to 20 mm in diameter with white to gold body colors and low luster. 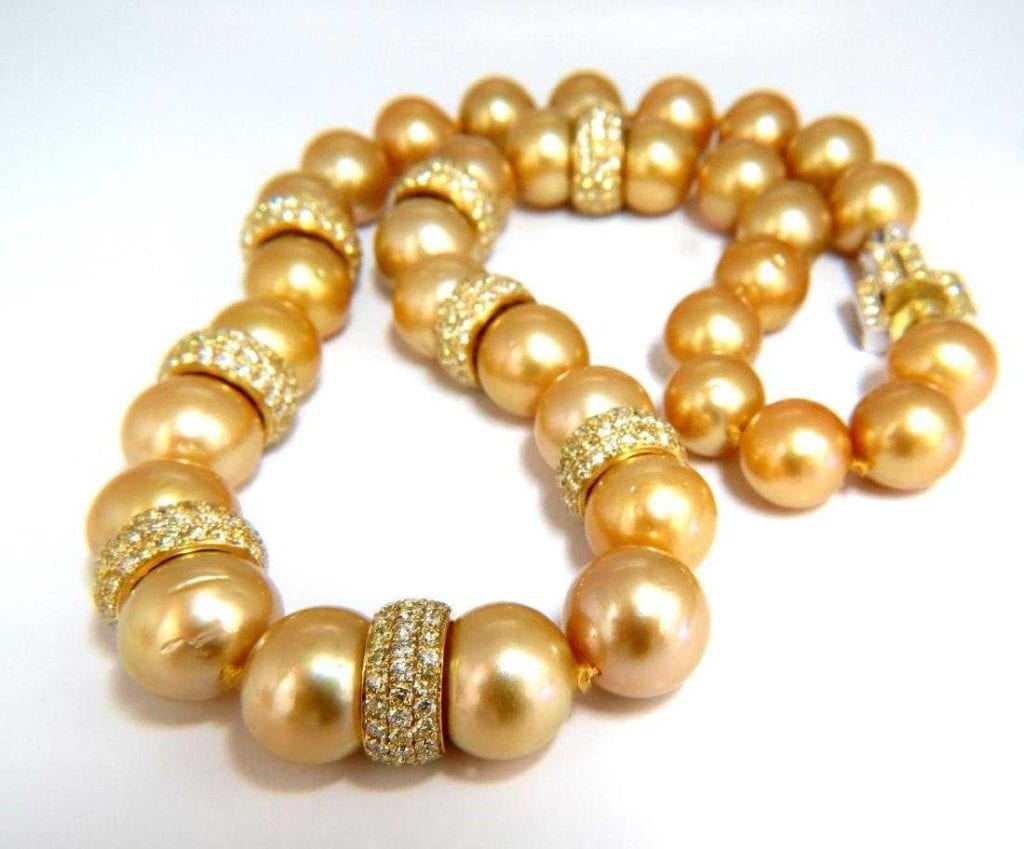 The famous Tahitian black cultured pearls are grown in black-lipped oysters, Pinctada margaritifera. Raised primarily in the waters of French Polynesia, they tend to be large like their South Sea cousins, ranging from 8 mm to 13 mm. These pearls have black or very dark body colors with prominent overtones of green and purplish pink.

Abalones produces both whole and blister pearls, usually green, yellow, or blue. Both the shell and the pearls are highly distinctive, with dark coloring and bright iridescence. A popular food item, natural abalones are becoming rare, especially on the California coast. Farms now raise them to meet culinary demands. In nature, the creatures grow to a foot or more in length. However, the farmed variety isn’t allowed to grow over 4”. If you have a shell over that length, you have a natural specimen for sure. 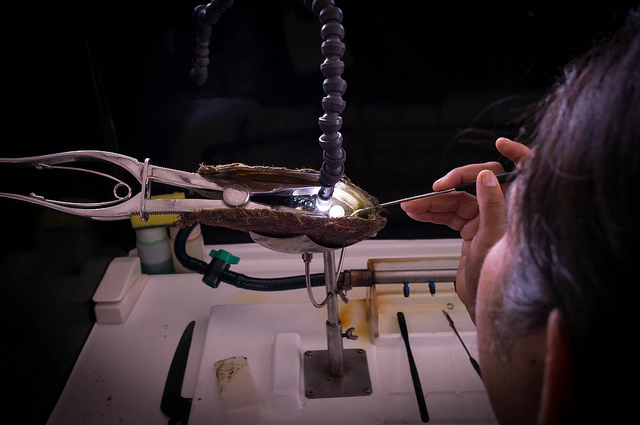 The world’s major pearl producing area, especially the coasts of Iran, Oman, and Saudi Arabia. For over 2,000 years, these waters have produced creamy white pearls. Persian Gulf pearls are usually small (less than 12 grains). During the diving season (May-September), hundreds of small boats work these waters. The diving depth is about 30′-90′ but usually less than 60′.

Pearls are recovered from oysters, washed, and then sold to merchants in Mumbai, India. Then, bleaching (using hydrogen peroxide and sun-light), sorting, grading, and drilling operations follow. In general, poor-quality pearls go to the Far East. Better pearls go mostly to Paris. From there, many reach the United States. Bombay is chiefly a brokerage center.

An arm of the Indian Ocean, between Sri Lanka and India. An important source for more than 2,500 years, this area offers only sporadic fishing today. The Sri Lankan government controls the fishing and auctions the oyster haul. The oysters are opened by leaving them on the ground to rot. Then, people search the decomposed matter for pearls. Typically, the pearls go to Mumbai. Traditionally, the Gulf of Manaar produces pale, creamy white pearls.

Divers in armored suits fish for pearl oysters off the west, northwest, and north coasts. These produce silvery white to yellow pearls. Shell recovery is also a major industry, as important as pearl recovery.

The term refers to the South Pacific and Indian oceans, but these pearls are also generically called “Tahitian Pearls.” Native fisheries operate around Micronesia and Polynesia. These pearls may grow large and generally round, up to 7,100 grains. Tahiti is the major pearl center.

Japanese waters are rapidly becoming too polluted for the natural existence of Pinctada. Today, cultured pearls, typically white, constitute a much bigger industry.

Other notable or historic sources of saltwater pearls include the following locations: 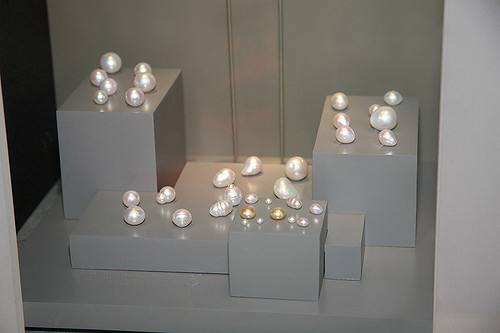 South Sea pearls on display at the Smithsonian Museum of Natural History. Photo by Cliff. Licensed under CC By 2.0.

Sometimes, jewelers measure individual pearls in grains. One grain equals 0.25 carats. (Please Note: a grain as a unit of measurement has other values when used for other materials, such as gold).

The following are some of the most celebrated saltwater pearls.

You can learn more about some of these as well as other famous pearls here.

Saltwater pearls, like all pearls, require special attention. See the main pearl listing as well as our detailed opal and pearl care guide for recommendations. 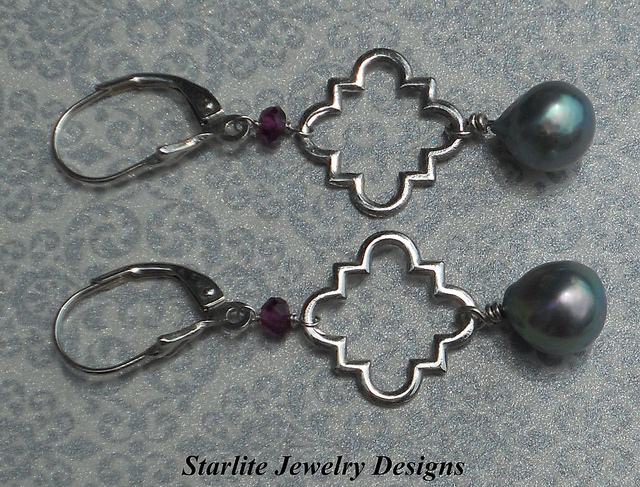 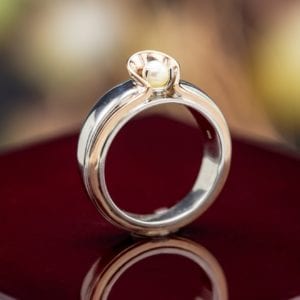 Although natural pearls are extremely rare and expensive, the availability of cultured pearls makes it easier to buy this classic, elegant gem… 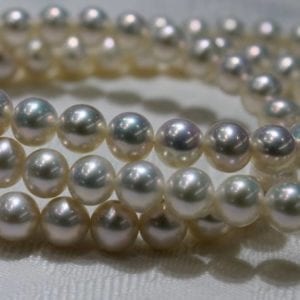 In this golden age of pearls, a wide variety of shapes, sizes, and colors are available. Our pearl buying guide can help you select a pearl you’ll… 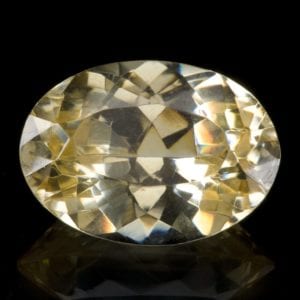 Although anglesites with pale colors can show great dispersion and brightness, they’re difficult to cut and inadvisable to wear. Faceted pieces… 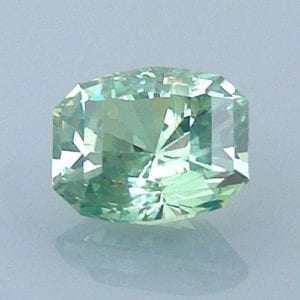 Gem cutters can choose from many faceting styles. Learn about the most common custom cutting techniques and pick one that suits your needs and skill… 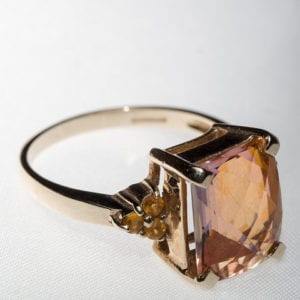 Can something akin to a slide rule help novice faceters today with transposing faceting angles from published gem designs? Check out the calculation-free… 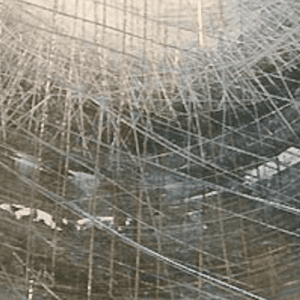 How to Score Polishing Laps

Most gem cutters prefer using scored polishing laps. They work better and faster than non-scored laps. Learn how to score and break in your lap.…

Gemstone identification New Member and New to the gem world