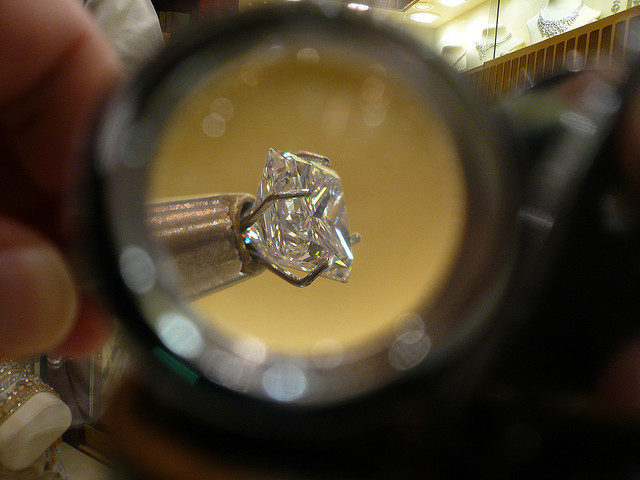 Unit: An Introduction to Gemology

Back to syllabus
Gemology is the scientific study of gemstones. Although there may be investors and collectors who are only interested in the monetary value of gems, they’ll need a scientific approach when the time comes to distinguish one gemstone from another. Whom will they seek out? Gemologists.
By Donald Clark, CSM IMG 4 minute read

Reviewing the different types of gemologists and what they do will make a good, brief introduction to gemology, for collectors as well as those curious about careers in gemology.

Jewelers need to understand gemology to answer their customers’ questions and identify any gems brought to them.

Goldsmiths (and other metalworkers) need specific knowledge about the physical characteristics of gems in order to create appropriate settings. For example, a setting that would be ideal for a diamond could damage an opal, and the amount of pressure used to set the prongs on a garnet could break a tanzanite. Some gems can withstand the heat of repair work involving high temperature soldering. If metalworkers take precautions, they can leave them in their settings. Other gemstones are so heat sensitive they would need to remove them. 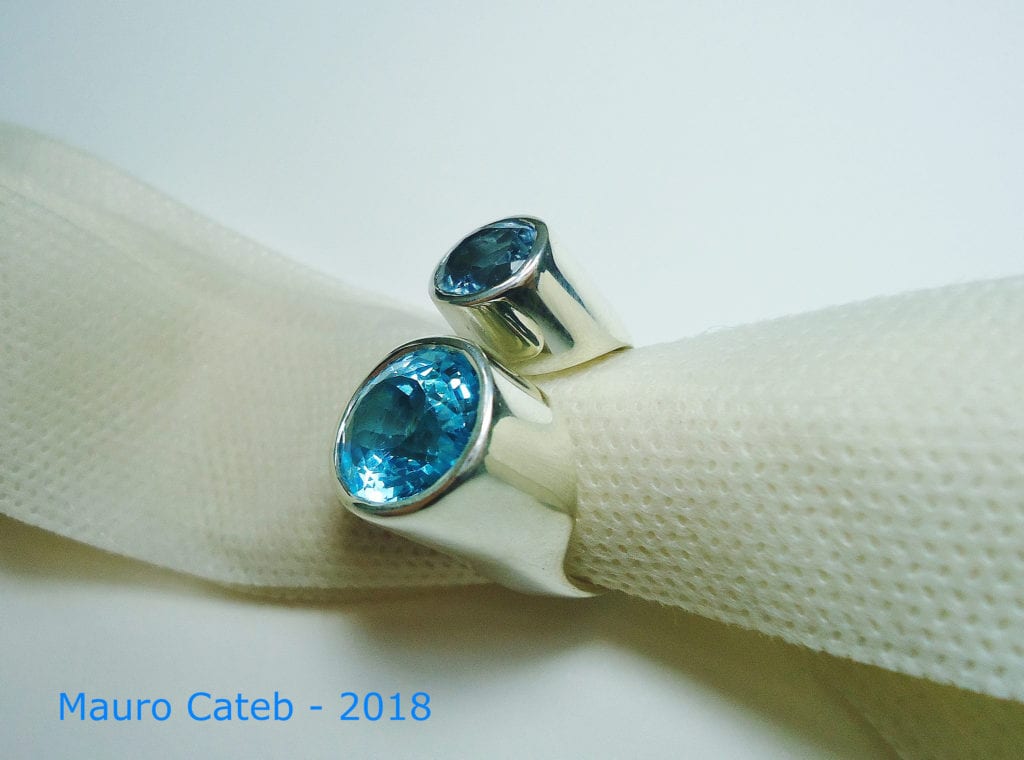 A topaz can make a beautiful ring stone. However, a jeweler must set it carefully to avoid putting pressure on its internal cleavage plane, which could cause the gem to split in two. Protective settings, like the bezel shown here, will hold a topaz securely and safely. Photo by Mauro Cateb. Licensed under CC By 2.0.

Lapidaries, or gem cutters, also need special knowledge. Appropriate cutting and polishing techniques vary from gem to gem. What would work well for one gemstone would be a waste of time or even disastrous on another gem. Faceting and gemstone color management go hand in hand. How cutters orient the rough can greatly impact the appearance of the finished gem. Cutting style is also a part of color management. 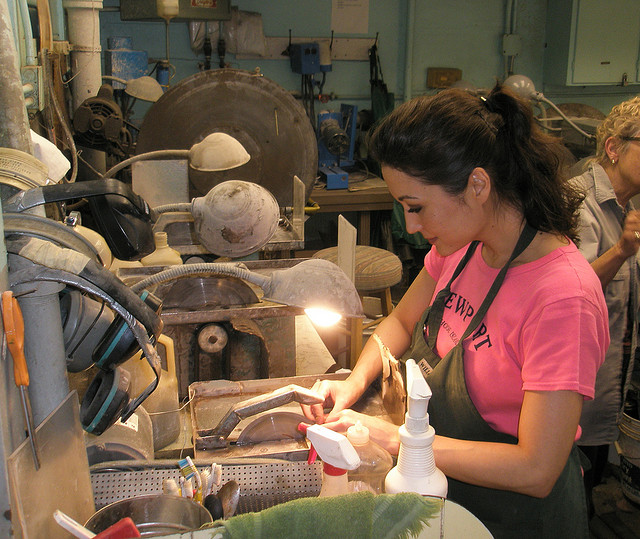 “Lapidary Lessons,” photo by Naomi King. Licensed under CC By 2.0.

The choice of cut can lighten or darken a gem, which will considerably affect both the appearance and the value of the stone. The shape, number, and location of facets influence the brilliance of the gem. Lapidaries much choose angles for facet cutting carefully. They must consider all these factors to minimize the amount of gemstone rough sacrificed to create a beautiful faceted gem.

Although scientists with degrees in geology, chemistry, and even physics make up the smallest group of gemologists, they’re influential. The systematic measurement and recording of the physical and optical properties used to identify gemstones is a well-established but ongoing scientific process.

For centuries, the lapidary was in the best position to recognize the differences in gems with similar appearances. The faceting process offered a perspective on gemstones no other gemologist had. Many inclusions, materials trapped inside gemstones, and physical characteristics, such as hardness, were readily apparent when cutting and polishing a gem.

Scientists continue to add to this knowledge by developing new testing techniques and researching new gemstones discovered in nature and synthesized in the laboratory. 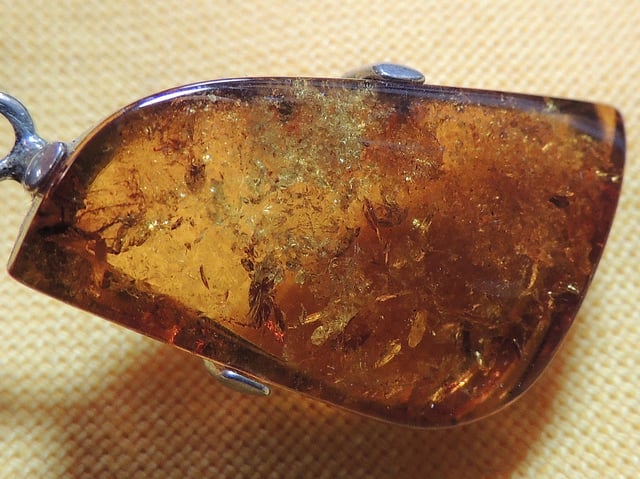 Famous for its inclusions, amber can have materials such as ancient pollen, insects, and other organic debris trapped inside it. Photo by Upupa4me. Licensed under CC By-SA 2.0.

Gem identification is the heart of gemology. For example, some rubies and garnets are impossible to distinguish by their appearance, but their physical properties differ considerably. Ruby and garnet crystallography varies greatly. While the visible shapes of individual stones may vary, the crystal structures of these gems at the atomic level are distinctive. Garnets form in the isometric or cubic system, while rubies form in the hexagonal system. 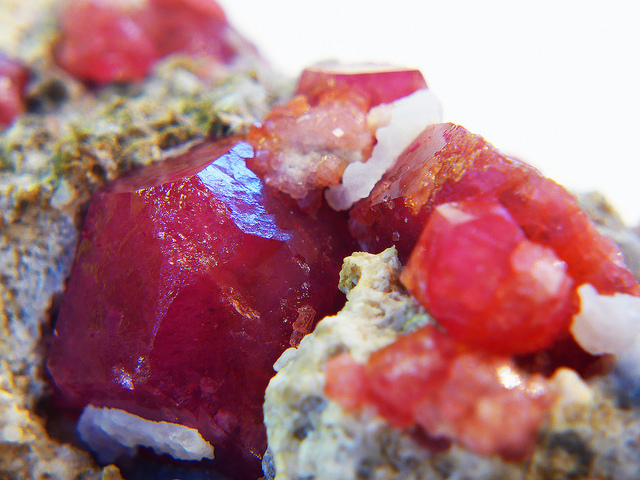 Dodecahedrons are one of the basic shapes in which isometric minerals can form, like the garnets shown here. Photo by Andrew Gustar. Licensed under CC By-SA 2.0.

Mineralogical techniques are also used to help identify gemstones. Scratch tests, in which various substances are used to scratch an unknown gem, determine hardness. A gem’s reaction to acid and even heat can yield important clues to its identity. Of course, these destructive tests aren’t appropriate for cut gems.

Scientists have also devised non-destructive tests to identify gemstones. They have designed instruments to measure the physical and optical properties of gems — like specific gravity and refractive index — without damaging them. Today, even people without extensive scientific training or expensive laboratory equipment can use these methods for gem identification.

Getting Started in Gemology

If you’re interested in learning about gems, first, learn how they’re categorized and the terms used to describe them. Next, study their physical and optical properties. With this background, you can start learning how to identify gemstones.

Of course, there are many side roads to travel as you study gemology. Perhaps you’ll become fascinated with phenomenal gems or with inclusions found in natural gems. People interested in gemstone collecting may also become interested in learning how to cut gems and make jewelry.

Whether your interest is casual or professional, the world of gemstones will amaze you. So, explore it from your desk or get your hands dirty at a dig! 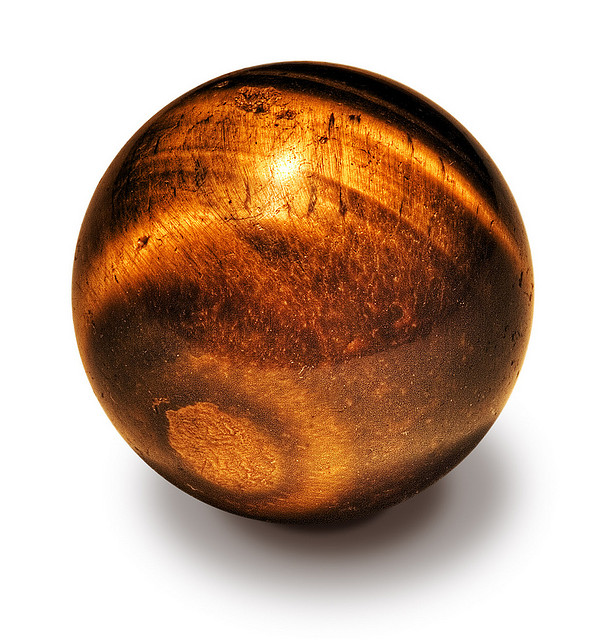 Tiger’s eye is a variety of quartz that often displays chatoyancy, a silky sheen, and sometimes the phenomena known as “cat’s eye.” Photo by Randen Pederson. Licensed under CC By 2.0.